An evolving design based on local features

This article first appeared in “Village Sign Times” in 2002. At the Members’ Evening on 24 November 2015 Les Casey described the origins of features in the design – going back to the arms of the Wittewronge family at Rothamsted in the C17. 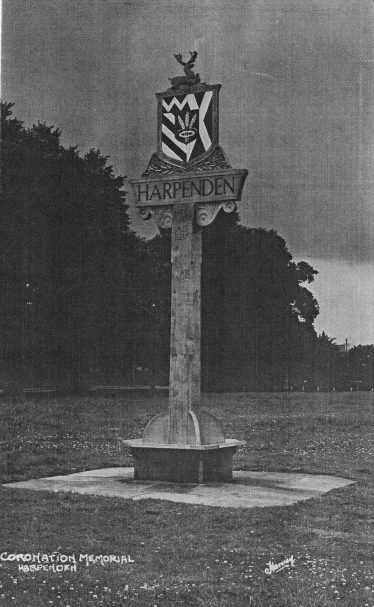 The Coronation sign, designed by Ernest Hasseldine and erected in 1937

While now officially a town, the original Harpenden village sign was erected by the Harpenden and District Preservation Society (now the Harpenden Society) to commemorate the Coronation of their Majesties King George VI and Queen Elizabeth in 1937. The sign was designed by local artist Ernest Hasseldine and a new seal, designed by Frank O Salisbury, for the Council’s use was also made, using the same design, being first used on Coronation Day, 12 May. The sign, erected in May 1937, was carved by Mr ‘Carver’ Wood and was unveiled by Lord Brocket at 6pm on 5 June 1937 watched by local residents. A stone, based on the design was also placed over the door of the new Public Hall opened in 1938 and can still be enjoyed today. Frank Salisbury was known for his painting in connection with Royalty. 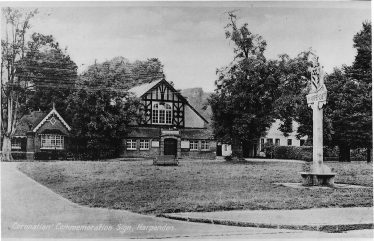 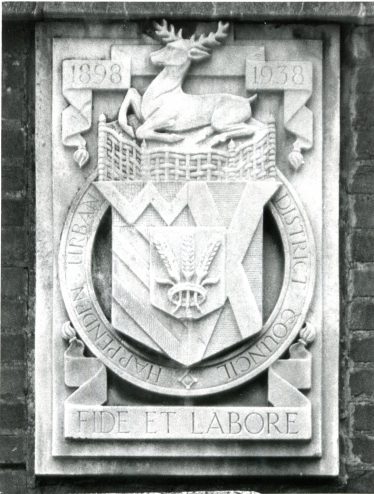 The carved crest above the entrance to the Public Halls, 1938

As with most place names the village sign was taken down in the early years of the Second World War and placed in safe storage. Re-erected after the war when confusion was then caused by a letter received and read to the Council Meeting on 2 September 1946 from Mr H Ellis-Tomlinson. This letter pointed out that the design did not comply with heraldic principles. The problem was passed to Mr Frank O Salisbury for his comments from which started the long process of finding a new ‘legal’ design, one which the Council could restrict to approved usage. The sign was taken down in November 1948 (unfortunately it is not known if this original sign still exists) and at a meeting on 2 May 1949 the Clerk said it was necessary to purchase copies of the new design, approved in April, for working purposes, at a cost of £5 5s. each. He wanted to buy one in colour and one in black and white, but the meeting decided that only the black and white version was to be purchased. 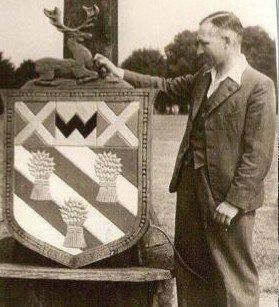 The new sign, designed by Frank O Salisbury, was carved by C Fowler and painted and gilded by his cousin F J Fowler, being erected in July 1949. It consisted of a massive oak post with a seat around its base and a cross member bearing the name Harpenden in gilt letters. Above this stands the coat of arms of the town surmounted by a hart couchant.

A new hart was carved by Basil Kassanis in June 1977 made of teak, rather than the previous oak, but this time was erected facing west, whereas the originals (both 1937 and 1949) both faced east. 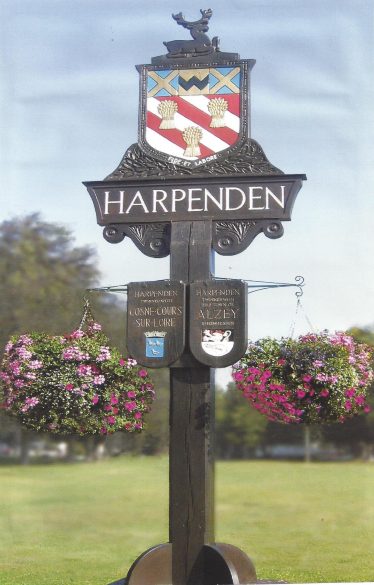 In April 1980 the sign was removed for renovation and fully restored at a cost of £500 paid for by the Harpenden Town Council. The twin town signs were carved by Gordon Hanson and attached to the south side of the post in April 1984*. However, a year later on 22 February 1985 the whole thing was felled. This was replaced by a new post and surmounted by a fibre glass replica but this time with the hart once again facing east. The carved original is now held in the safe hands of the Harpenden Local History Society. The designs for all these signs are also still held.

The story continued as on 11 December 1991, to celebrate the 60th anniversary of the Harpenden Society, a further identical sign was erected as the north end of Harpenden on what was the A6 (now A1081) at Kinsbourne Green.

In February 2002 a further three signs were erected in different areas of Harpenden marking Southdown, Batford and Hatching Green. Based loosely on the main Harpenden signs they are much smaller and are only single-sided with colouring achieved with modern plastic type material. 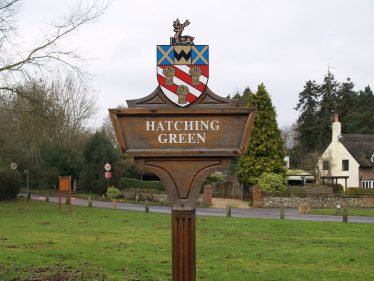 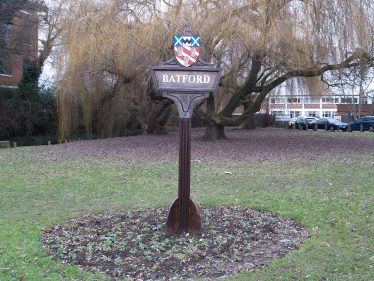 My thanks go to local historians Sue and Geoff Woodward for providing the information contained above.

*    The town twinning shields were removed around 2010, being in disrepair, and have not been renovated or replaced.

Les Casey started his talk with a scan of the portrait of Sir John Wittewronge, with his coat of arms in the top left corner. When Rothamsted was refurbished around 1900, stained glass panels with the arms of the successive generations were inserted in the windows of the Great Drawing Room.

Towards the end of the C19 Goss Crested China designs were marketed by W H Goss and sons, who produced souvernir items initially for seaside towns and then for communities throughout the UK. The agent for the Harpenden design was Valentines Stationers, at 3 High Street (now Thorns). There was no scrutiny of the heraldic design.

The designation of the sign – from Harpenden Town Council’s Official Guide: 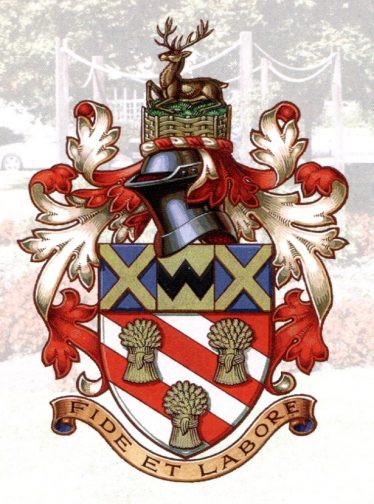 The Harpenden Coat of Arms

“Bendy of six Gules and argent three Garbs or a chief Azure. Thereon on pale between two Saltires throughout of the third a Fesse dancette Sable and for the Crest on Wreath of the Colours. Within Wattled palings proper a Mount vert thereon a Hart lodged also proper.”

Originally granted to the former Urban District Council in 1949, it was transferred to Harpenden town Council by order of her Majesty in Council recorded in the College of Arms on 30 May 1978.

The crest showing a hart at rest over traditional mountings of a helmet and wreath alludes to the County of Hertfordshire; the two gold diagonal crosses represent the Diocese of St Albans, with the black W between them taken from the Wittewronge arms, as are the diagonal rips in the bottom part of the shield. The three gold sheaves symbolise Harpenden’s connection with wheat growing, including in the past with the straw-plaiting industry.