The Everest Chain and 'Tommy' Shadbolt The menu for the presentation dinner in 1954.

While sorting through one of those boxes of memorabilia we all keep around us, I chanced on a relic recalling an almost-forgotten moment in Harpenden’s past. An old menu and programme for an event in 1954 tells the story of the Chain of Office which now distinguishes the person of the successive Town Mayors of Harpenden.

The menu cover bears the marks of time and has a few odd spots of gravy – or possibly red wine – from the dinner it commemorates, held at the Public Hall on Wednesday 31st March, 1954 and attended by a wide range of Harpenden’s citizens who had paid to take part in a memorable event. The menu’s cover is decorated with the two medallions from the centre of the Chain of Office, revealing why it was known from the beginning as ‘The Everest Chain’.

It was the creation and gift of Sydney Victor Shadbolt, one of Harpenden’s best-known citizens of those times, a solicitor who had made his way from humble origins as the son of a council roadman living in a cottage at Coldharbour. The idea for the Chain followed directly on his successes in creating and organising the Festival Revels of 1951 and the Coronation Celebrations of 1953, both of which marked Harpenden out as a small town that could hold its own in spectacular events with the major cities of England. 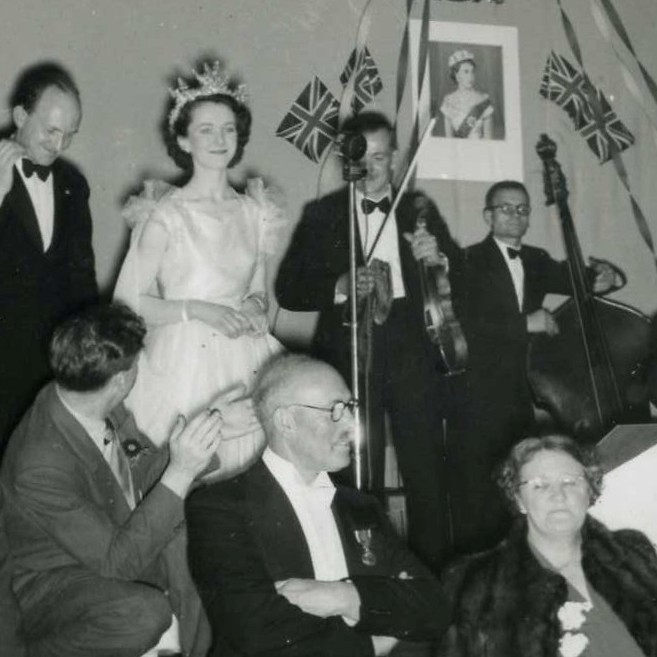 Before he had the Everest Chain, the first Chairman to wear it, Councillor Leslie Edgell and his wife Ethel pictured at a Coronation celebration dance at Batford Junior School in 1953. On the platform is the ‘Fairy Queen’, Jill Gott, and left the Compere, Cyrille (Paddy) Paddison.

Those events had been an immense personal achievement for ‘Tommy’, as Shadbolt was always known, and derived much of their success from the willingness with which numerous ordinary people had rolled up their sleeves to support him. Shadbolt’s warm personality enabled him to persuade the better-off to part with their money and the working class folk among whom he had grown up to join enthusiastically in his ambitious endeavours.

When, after the Coronation, he suddenly and surprisingly announced that he was leaving Harpenden to make a new home and career in Devon, The ‘Gleaner’ wrote on the front page of the Harpenden Free Press –
“He is half-a-dozen men rolled into one and I would say without hesitation that it would take half-a-dozen men to fill his place.”

In a further surprise, a few months later Shadbolt was back in Harpenden for a Civic dinner and ceremony in which he presented the town with a chain of office to be worn by the Chairman of the Council. At the time, nobody envisaged that Harpenden would be dignified in the future by the office of Mayor. The leading citizen was simply Chairman of the Council. The Chairman was selected each May from among the fifteen councillors who represented the whole of Harpenden (there was no ward system). With the Village as the centre of a much smaller district than today, you might meet the Chairman of the Council out doing her shopping, sitting in his office or behind the counter of a shop, but there was no identification for the leading citizen – not even a badge of office. This deficiency was what ‘Tommy’ Shadbolt had resolved to put right. After the dinner he called on the then Chairman, Leslie Edgell, to stand and he hung around his neck the heavy and ornate silver gilt chain, bearing panels for the names of succeeding Chairmen to be engraved. In the centre were the two badges or medallions, the larger bearing the Harpenden crest and the smaller a representation of Mount Everest surmounted by the Crown.

The great news of the Coronation, of course, was that Everest had been climbed for the first time. The greater news was that the British team included two residents of Harpenden, Dr Griffith Pugh, a specialist in human physiology, and Michael Westmacott a climber of some note who worked in statistics at Rothamsted Experimental Station. Mike Westmacott receiving scroll of honour from Chairman of Harpenden Urban District Council, Cllr Edgell, at a civic dinner in 1954.

The names of Dr Pugh and Mr Westmacott were inscribed on the back and Councillor Edgell awarded them illuminated scrolls commemorating their achievements, including the words: ‘We tender our sincere congratulations on the result of the Expedition, so fraught with peril but yet so gloriously successful.’

Two Chairmen’s names were already inscribed on the new chain, those of Councillor Edgell as the first to wear the chain and also his predecessor, Councillor Albert Clark, who had been Chairman of the committee for the Coronation celebrations. The chain continued to be worn by each successive Chairman. When the Urban District Council was merged into St Albans District in 1974, the chain was retained for wearing by the Chairman of Harpenden Parish Council and then by the Town Mayor when Harpenden formed a Town Council in 1989.

While wearing it for the first time at the presentation dinner, Councillor Edgell handed an illuminated portfolio to Mr Shadbolt in appreciation of “the outstanding public service rendered by him to his native town and his valued contribution to its welfare and to its social and cultural life over a period of many years.”

The dinner in Harpenden Public Halls

The words may sound ponderous in today’s more relaxed ambience, but this event of sixty years ago was, in fact, a very bright and happy occasion, At the age of twenty-one, I was probably the youngest person present at the dinner and my copy of the menu reminds me that everybody was full of hope and optimism for the future. The mid-Fifties were probably the point at which Harpenden began to grow from a sleepy village to a bustling town. Most of those there on the day are long gone, but their dedication and achievements should be remembered.

Incidentally, the original chain was stolen in 2003 and had to be replaced, like for like. I wonder who’s wearing it now?

(The writer, John Seabrook, was Chief Reporter on the Harpenden Free Press in the 1950s and his book ‘The View from Church Green’ records events of the time, including the presentation of the Everest Chain.)

Tommy Shadbolt – a Son of Harpenden

Sydney Victor Shadbolt, or ‘Tommy’, as he was known among friends, was a local lad who grew up in a cottage in Marquis Lane. His father was a council roadman. ‘Tommy’ was taken under the wing of solicitor Charles Sprott Tuckey and eventually qualified as a solicitor himself.

For many years Tuckey acted part-time as the Clerk to Harpenden Urban District Council and this position and his office near the foot of Vaughan Road, placed the firm at the heart of local affairs. Shadbolt had no position with the Council and never sought election, but he became known as one of the most influential citizens and was tireless in voluntary work for local causes.

The spur to his greatest local achievements was the 1951 Festival of Britain, a national celebration of the country’s post-war achievements. Tommy Shadbolt got a few friends around him and they decided that Harpenden should have the best local Festival in the country.

There was a convenient peg to hang it on in the shape of the annual Whitsun camp and fete organised by the local scouts. Tommy had been a pioneer in scouting between the wars and was now District Commissioner, so he got the scouts to build a bigger camp in Rothamsted Park and converted their ‘Miss Harpenden’ beauty contest’ to selecting a ‘Carnival Queen’ who would grace the week of festivities which were to take place all over Harpenden.

The Festival Revels were such a success that when Queen Elizabeth II succeeded to the throne the following year there was an immediate demand for a replay of the Festival to celebrate her Coronation in 1953. Tommy Shadbolt set about turning the Village into ‘Fairyland’ for a full week of local events and jollity. Never one to stint his own and his friends’ cash, he hired two of the best military bands in the country to play a magnificent Changing of the Bands ceremony on the Common and to lead the ‘Fairy Queen’ and a huge Carnival of local organisations on decorated floats. He got himself up modestly as a gnome for the occasion!

After the huge success of both events and his presentation of the Everest Chain of Office to Harpenden Council, he decided to semi-retire on a farm in Devon and left Harpenden in 1954.