A Sudanese delegation in July 1946 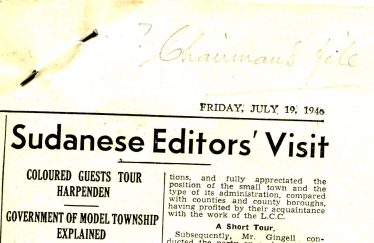 Among the many papers of Cllr F N Gingell, Chairman of Harpenden Urban District Council in the 1940s, is a press report (probably from the Herts Advertiser) dated 19 July 1946, describing the tour of Harpenden made by ‘coloured guests’. Attached to it is an exchange of letters between the Central Office of Information and Mr F A Harris, Clerk to HUDC to set up the visit, at short notice. A group of Sudanese editors was “visiting this country as guests of H.M. Government, in order to see something of the British way of life, especially national and local government”.

They had already visited the House of Commons and the London County Council, but were keen to learn how local government worked. In the Council Chamber at Harpenden Hall, Mr Gingell and Council officials described the constitution of the Council, the work of the Committees, how much the various services cost and how the town planning system worked.

This was followed by a tour, starting with “an inspection of the modern Public Hall” and a view of Harpenden from the top of the Common, to show them “the natural beauties [which] had been so well retained and woven into the schemes of building development”. They were taken to see “the temporary housing site in Grove Road, where the road, drains and bases for the houses are nearing completion”. Then they were taken to see the sewage works and paid a call to see “the permanent housing site at Batford, where roads and sewers have been constructed and building is soon to commence, and then the party looked in at the Westfield Cemetery”.

Cllr Gingell entertained them to lunch at The Railway Hotel. Afterwards they were due to visit Colonel Wernher’s famous dairy herd at Luton Hoo, but instead asked to see schools in the district. Mr Gingell, as Chairman of the Education Committee, conducted them on a visit to the modern, well-equipped Manland Schools, where they visited various forms “chatting to the teachers in charge, and in some sections asked questions of the scholars”.

It seems that a good time was had by all, but it would be fascinating to know whether these Sudanese newsmen were able to share their experiences with local administrators in Sudan, then under British occupation. Sudan became independent in 1956.