This article first appeared in Newsletter 48 in February 1989: it has been updated. 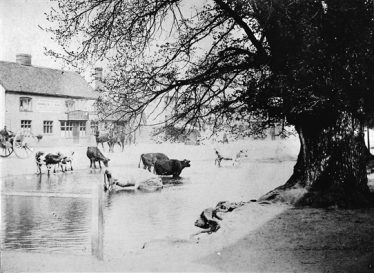 The best known pond in Harpenden was the Old Cock Pond opposite the Old Cock Public House in the High Street. Animals came here for water, along with the ducks that lived by it. It was for the ducks that Dr Blake, resident in Bowers House behind the pond, built a duck house to house them. These ducks also came in for attention in the 1920s when the Tory publican at the Cross Keys, another nearby Public House, dyed them blue at Election time. 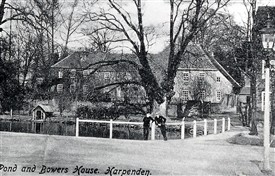 Bowers House with pond and duck house in front c1900

It was cleaned out at about ten year intervals, and one report in August 1908 tells of the ducks walking on cracked mud.

The demise of the Cock pond 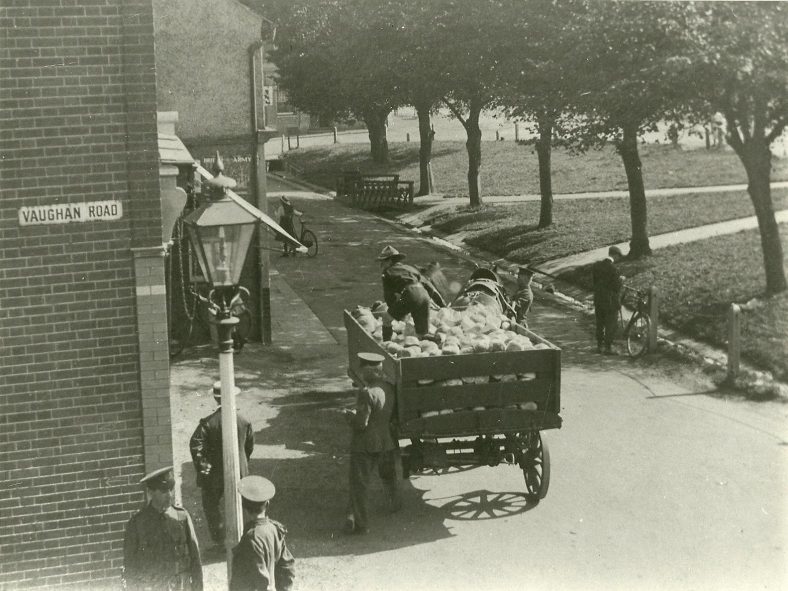 This photo from c.1914-15 shows the stream running alongside Lower High St, and a rustic bridge close to Station Road 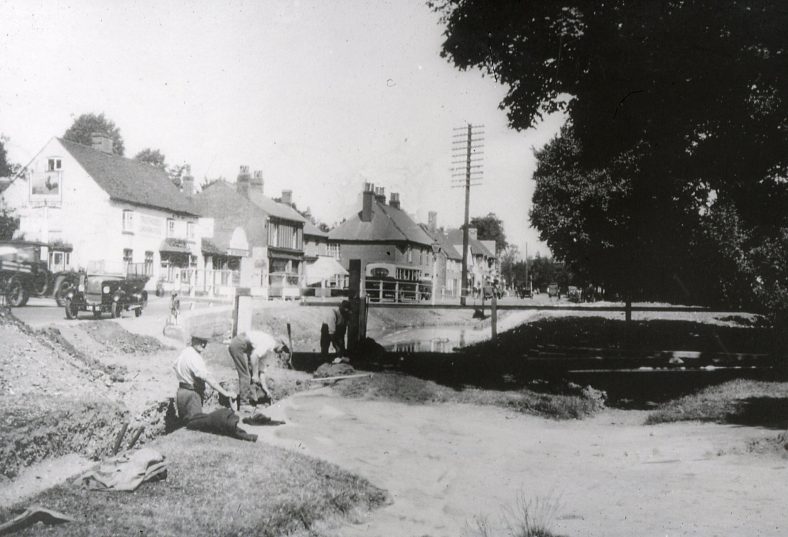 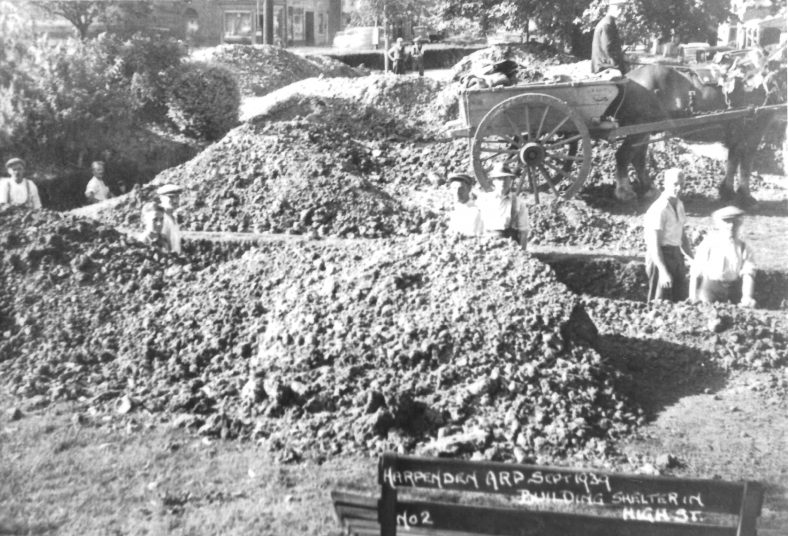 Excavations for the shelter near Bowers Parade, 1939

During the War, air raid shelters were dug out on the pond site and then grassed over again (they are still there) and memories of the footbridge were stirred again in 1951 during the Festival of Britain celebrations when some were reconstructed as part of the decorations in the village.

The stream from the Cock Pond ran through the High Street and onto the “Common” to drain in old gravel workings alongside Southdown Road. The stream was sometimes known as River Harp. 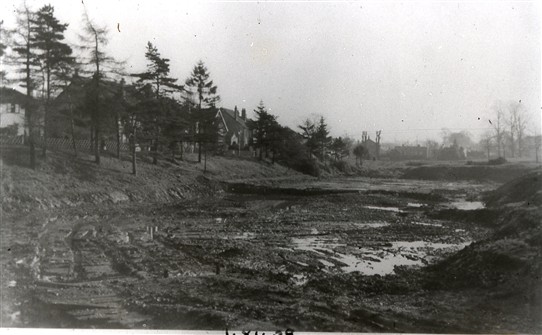 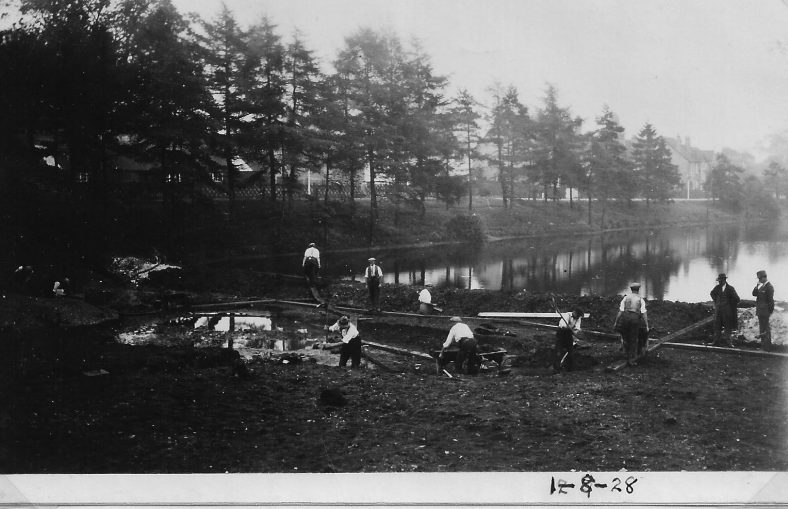 These gravel pits were dug out in the 1870s and in 1928 work was provided for the unemployed, digging and reshaping the workings to form three ponds at descending heights. Effort had been made to improve the area, as in April 1907 fish were introduced and in April 1931 a local resident gave 36 water lilies, but the council employees trying to plant them gave up when their raft capsized. 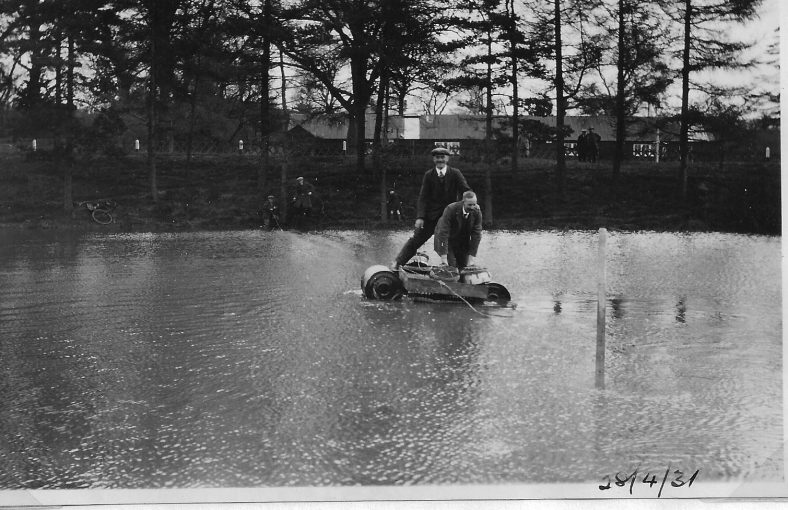 An attempt to plant water lilies in April 1931 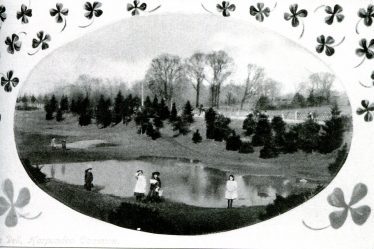 Mrs Hodgson’s trees, planted in the 1890s – grounds of Welcombe in the background

Mrs Tylston Hodgson, who lived at Welcombe, a nearby house, had planted some fir trees to improve the view in the 1890s, and in 1948, 36 more pine trees and 8 willows were set. 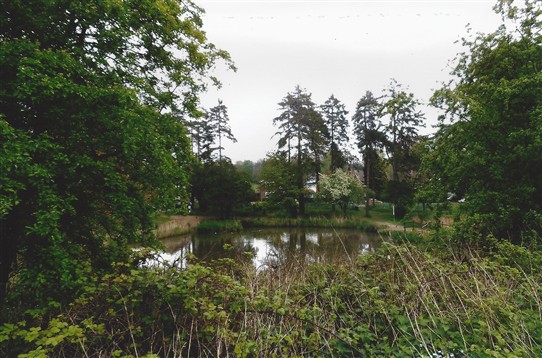 However, over the years, water from the roads carried oil and petrol into Southdown Ponds, which soon became extremely polluted and consequently bad for wildlife. The ponds had been cleaned in 1985, but pollution continued. In 2004 Harpenden Town Council initiated a project, in partnership with Hertfordshire Highways and the Harpenden Society to regenerate the heavily polluted and unusable ponds. A nine-metre long petrol interceptor was installed to cleanse the dirty water. Southdown Ponds were then re-lined and re-planted with native species. They were officially reopened on December 13, 2007. Harpenden Town Council information panels describe the ponds and the surrounding wildlife.

Nearby was another notable pond, the Silver Cup pond, being close to the Silver Cup Public House. The pond was originally known as Vyses Pond after a nearby factory owner, and for a while as the Old Pond. There was an island in the middle with a willow tree set by Joey Healey, the crippled son of a local brewer, who swam over and set it; it became known as Joey’s Isle. 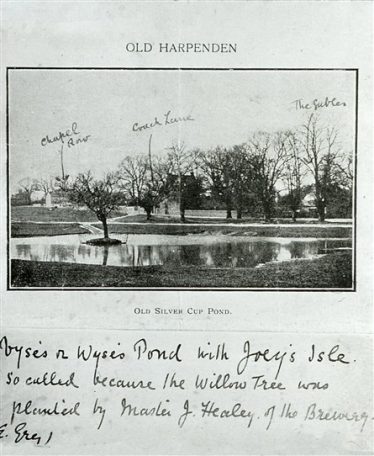 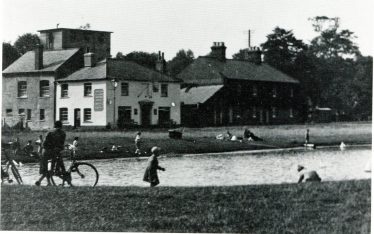 The pond was spoilt by the wholesale clearing out which left the bottom with no water bearing strata. The Lord of the Manor (Rothamsted)  J.B. Lawes, had his staff concrete the pond in 1899, and it became a favourite place for many years. In the First World War, soldiers billeted in the area bathed in it, and in winter it was used for skating and sliding.

Prior to April 1936 it had been filled with water drained from the main A6 road, but in that month, road water was diverted to the Southdown Road ponds and mains water laid on to the pond, which held 260,000 gallons of water. In 1969 the local council, having turned it into a sandpit, decided that it was a health hazard and in January 1970 it was broken up and filled in with indecent haste before anyone could protest.

There were several smaller ponds, one, called the Black Pond, was on the corner of Amenbury Lane and Leyton Road and is supposed to have got its name from a verger who lived in Amenbury Lane. It disappeared when shops were built on the site, prior to which it had been part of Yew Tree Farm.

Another was Bartons Pond, between the St. Albans Road (A6) (now A1081) and Maple Cottages which lay back from the road almost opposite Cross Lane, and was still visible in the 1960s.

On Harpenden Common, the site of the present Golf Club House was a blacksmiths worked by the Lines family, and beside the smithy was a dip, usually with water in it, known as Lineses Pond, but was filled in about 1900 and is now part of the golf course. 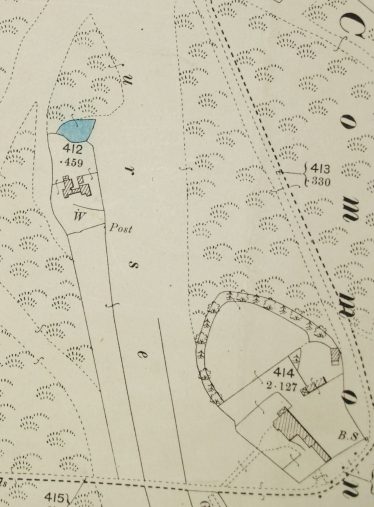 Extract from 1898 OS map showing the pond by Lines forge on the Common, near to Limbrick Hall

The drainage works on the Luton Road (A6) probably saw the end of the roadside pond at Townsend Farm c1928 that had been there many years, but has been recreated by the builder developing the Harpenden Lodge site.  On the North West corner of Thrales End Lane and Luton Road (A6) A1081 was a pond some 8-10 feet deep and known as” Shear Mere”. It had more or less gone in the 1940s.

Topstreet Farm on the corner of Crabtree Lane ceased to be a farm in 1924 and its barns were pulled down and the farm pond filled in. 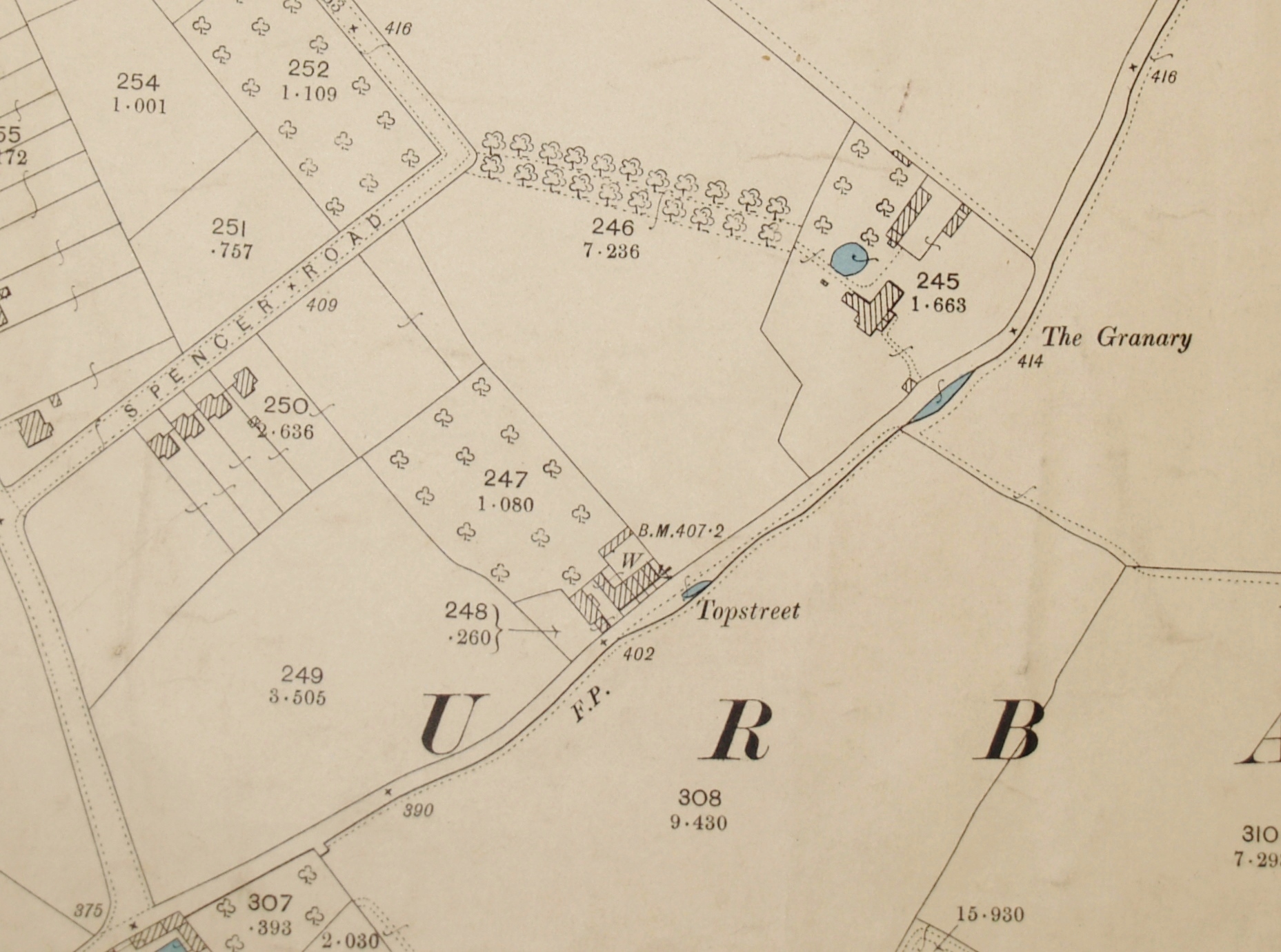 Depending on the definition of a pond, the watercress beds at Batford, Harpenden were in use until about 1958 when disease upset watercress growing in the Lea Valley. The beds became derelict, although the spring water from 100 feet below ground still rises at 52° and runs through the old beds, by now silted up. In January 1975 the Upper Lea Valley Group cleared out the large lagoon near Marquis Lane and rebuilt the small dam where the water runs into the River Lea, in September 1975 to recreate the former pond.

One other pond still in use for drainage is at the corner of Grove Road and Dark Lane. Starting as a gravel pit, later a reservoir for a nearby rubber factory, with a door in the protecting wall for fire hoses to be fed through, during WWII it was an Emergency Water Supply for possible fire-fighting. It now serves as a soakaway for local road drains. 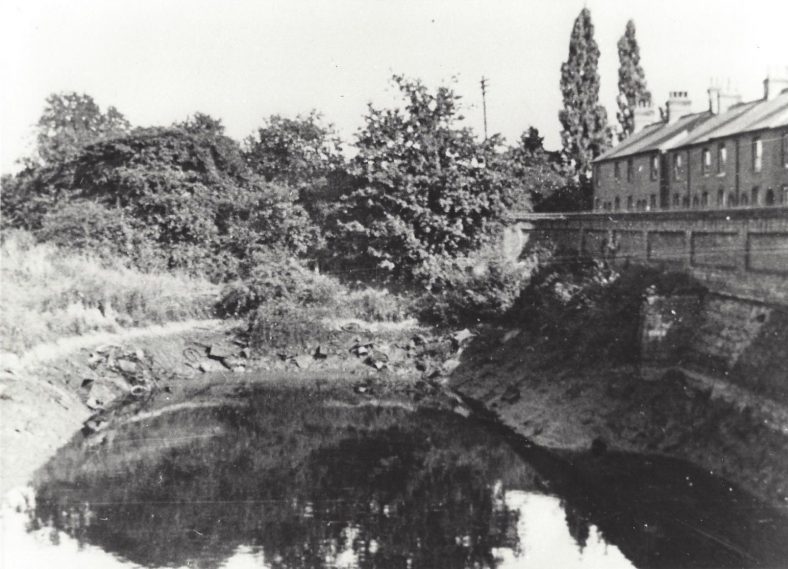