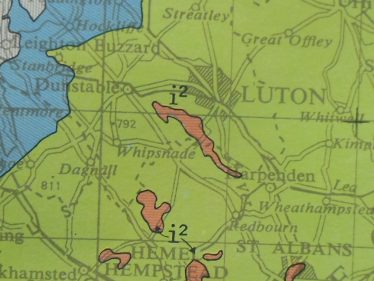 Some residents of Harpenden will not know about the slip. It does not protrude into everyday life. It does however lie beneath the feet of many and has influenced the landscape, the agricultural use of the land, the foundations of houses and the development of bygone industry.

The slip in fact is a very deep deposit of clay, situated between the stratas of chalk which form the bedrock of our county.

The southerly extremity of the slip is found on the upland close to Redbournbury Mill, then trending north through Hammonds End, Rothamsted Park, Redbourn Golf Course, Annables Farm, Lady Bray Farm, Pepsal End and it terminates at the appropriately named Slip End. The hydrology of the slip is interesting. Its very high clay content predisposes it to act as a large sponge, soaking up and retaining the winter rainfall and creating a very high water table which spills over in the form of springs feeding the River Ver and a series of historic water courses, some of which are remembered in the place names of Kinsbourne and Braybourne.

The advent of potable water pumping stations has however effectively reduced the heights of the water table and consequently the strength and activity of the springs. The wetness factor together with the heavy clay soil has had a major bearing on the farming activities on the slip. Historically the window of opportunity for tillage and harvest could be very narrow indeed so the production of cereals and other arable crops could be a gamble with the weather and farmers opted for permanent pasture and production of milk and beef.

Change from dairy to arable farming – and brick-making

After WWII the economics of farming changed and this together with a lowering of the water table and the availability of much higher powered tractors influenced farmers to change from milk to arable crops. The animal has virtually disappeared from the slip – the byres and milking parlours now converted to up-market residences.

At some time during the nineteenth century somebody decided that the clay from the slip was excellent material for the manufacture of bricks. At least one name exists – Brickfield Cottage on Watery Lane related to a small cottage industry but there was larger brick-making enterprise at the village of Slip End – large enough to bring in skilled Italian artisans whose descendants still reside there.

The slip has had a major influence on the specification of the foundations of houses and extensions. Anyone building on the slip will be aware of the very deep foundations included in the design and the influence this has on the cost of building.

Finally any gardener who bemoans the difficulty of hoeing their rose bed or digging their vegetable garden can blame the intractable clay of the slip. However, rest assured that the application of large amounts of organic manures together with assiduous mulching will bring untold benefits and result in a soil easily worked and very productive.