Tucked back from the edge of one of Harpenden’s quiet private roads sits a fascinating property, not quite in keeping with the rest of the street. In fact, that’s an understatement. Ferrum House veers so far from the architectural path of its neighbours that many a passer-by will have thrown a double-take. 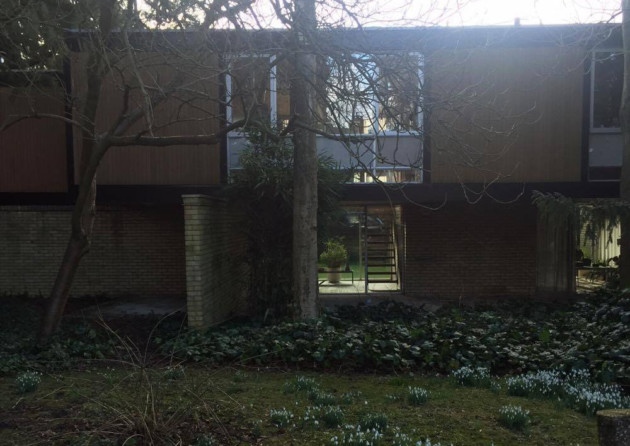 Those familiar with Harpenden and its various “Commons” will know that the neighbourhood is a veritable chocolate box of pre-Tudor, Tudor and mock-Tudor property. When it’s not a 17th century priory you’re dealing with, complete with box topiary and flamingo sanctuary round the back, it’s history-leaden cottages with roses round the windows and horse shoes above the door. Local lore pumps through the timberwork that makes up each property’s skeleton here.

But cut through Harpenden Common Golf Course (duck for low-flying balls) and you’ll find yourself in East Common: a little more canopied by trees, and home to Ferrum House, devised and designed by the man who lives in it today.

“We were very lucky with this build,” explains Jack Bonnington, who moved to Harpenden in 1963 and built his own house. “The chief engineer in Harpenden had all the powers of planning at the time, and was very keen on modern architecture. There was no hesitation approving this project.”

So – beams and flagstone were out, timber and glass were in.
Jack is a charming blend of old-school and innovation. His career as an architect was always ahead of its time. The projects he worked on across his fifty-odd years are a testament to that. It’s refreshing to meet a gentleman of his generation with such an openness to vicissitude.

“We would never get planning permission to do this now. Never. These days, things have got to be a copy of something that never existed. Planners are very difficult. Designs have to fit in. It’s ignorant, frankly.”

If you’re fighting off a nagging sense of déjà vu whilst reading this, it’s because Jack featured in the February 25th edition of Herts Ad ‘Property’ on Tyttenhanger House – a history-drenched 20-bedroom manor owned also by Jack as a base for his architecture business. It was way too tantalising to not write a juxtaposition piece on his own home.

“I got an agent in to value this property. But he couldn’t,” Jack recalls. “He came to Ferrum House and was puzzled. He was around half a million off the mark.

Throwing another plot twist into this tale, Ferrum House is actually a listed building. Probably to the shock and chagrin of it’s curtain-twitching peers, the house was classified as Grade II by St Albans District Council on July 15th 1998. This could potentially have something to do with the renowned status of its designer/builder/owner.

Originally from Bradford, Yorkshire, Jack attended Kings College in Newcastle at the age of 17. He studied architecture and town planning. From this very young start, Jack was soon ploughed with the opportunity to travel. He was the graduate chosen to leave his university and work alongside designers in Memphis, Tennessee. The army interrupted the flow of Jack’s blossoming career for a brief while, calling him into the Royal Engineers. When that was over with, Jack returned to the UK and began working for Basil Spence, who was responsible for Coventry Cathedral. This role sent him to the likes of Sussex and Southampton, to work on new university buildings, after which things got a little more exotic; he was given projects in Cyprus, Beirut, and the Gulf.

He was chucked head-first into a whirlwind of global design and global threat. He had to “drop everything and leave” one business trip due to a nearby political assassination attempt, which happened the same evening he’d been helicoptered to a consultation with someone in national exile. Following this, he worked in Hong Kong with Henry Fok, the reported headman of the 14K Triad mafia, who were wanted for smuggling arms during the Korean War. Jack Bonnington was a bit like Indiana Jones, with a specialism in architecture rather than archaeology.

Whilst metaphorically dodging bullets around the Middle-East, Jack was made a partner at Basil Spence. When Spence died Jack took the reigns of the company, and relocated the team to Tyttenhanger House.

At this time, Jack and his wife Esme (and their two young children) lived in a flat in Friern Barnet with “a kitchen you could barely turn around in”. Jack was itching to design and build something himself – and actually live in it.

A plot of land became available in Harpenden. It used to be the rose garden of a manor house. Jack felt it perfect for creating a long-term base for his young family. 40 years later, he still lives in it.

“I suppose you’d call it minimalist, if you can reduce it in essence,” Jack says, when asked to define its style. “I was inspired by Mies van der Rohe. Although he hasn’t done a house like this, he works on high-rises in New York.”

Ferrum was completed in the mid-sixties and given a 12-page spread and the cover of 1966s House & Garden Book of Modern Houses and Conversions. It’s a timepiece to the era in which it was built. While the surrounding historic homes can be charmingly modernised, Ferrum House is unremittingly post-modern.

“There was no brick-cutting when we built it,” Jack explains. “The whole property was designed in 9 inch units; so all the dimensions equate to one single brick.” The wood ceilings are made with pine, the doors (which slide rather than open) are teak and there is no paint on the premises other than the black seal. The flooring is made from a Swedish mosaic glass. “It looks as good as new, doesn’t it?” Jack points out – and it does. The crystalline tiles look as if they were lain last week, let alone last century.
Strolling through the property with its designer, I am attacked by a conjuring of imagery. There are touches of old-school James Bond about this home; it also makes me think of Thunderbirds! There are what feels like miles of storage cupboards along one particular corridor, and a self-contained annex beneath the upstairs living area. The furnishings reflect the well-travelled man who concocted it – lamps from Italy, ornaments from Thailand, Japanese dolls, American lounge chairs. Outside, the garden weirdly combines what was once a country rose garden with the modern Zen of contemporary landscaping. The majestic redwood trees that surround this plot give the house the feel of a Californian writer’s retreat. The majority of these trees are at the front of the property, kindly allowing Jack and family to live privately in what is essentially a fishbowl (the gigantic windows allow you to see through the house from back to front). Equally, neighbours who don’t care for this design can kid themselves that it’s not there.

“It appeals to some people, but not many,” Jack says, blithely. “I once invited the senior partner of a big firm I was working with to come and visit. When he came, he asked when I was going to finish it.” 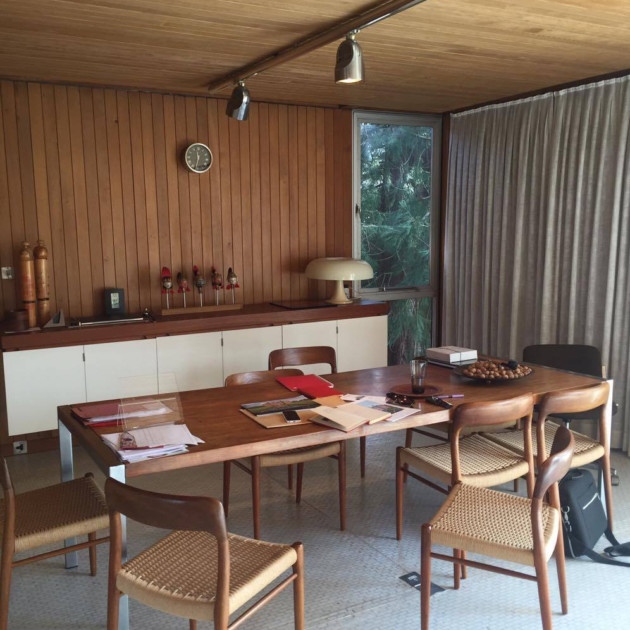 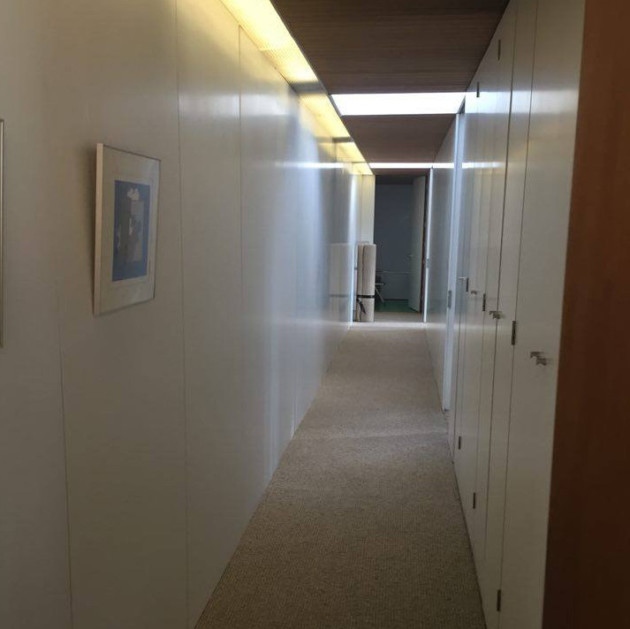 Plenty of space in the storage area 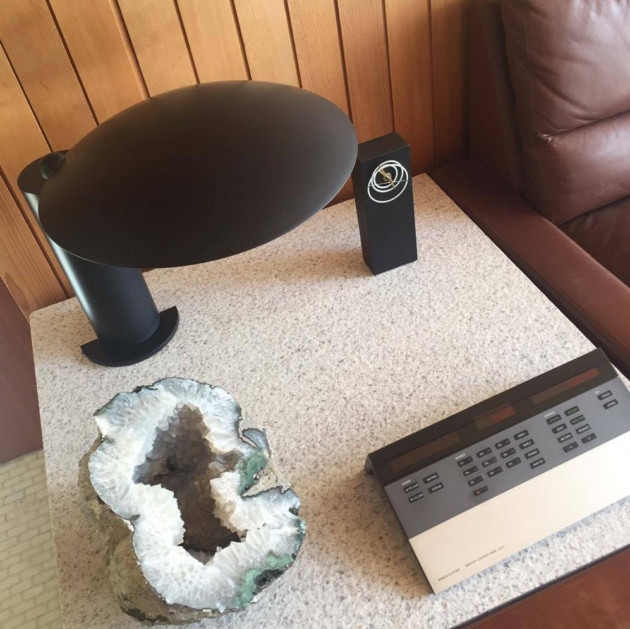 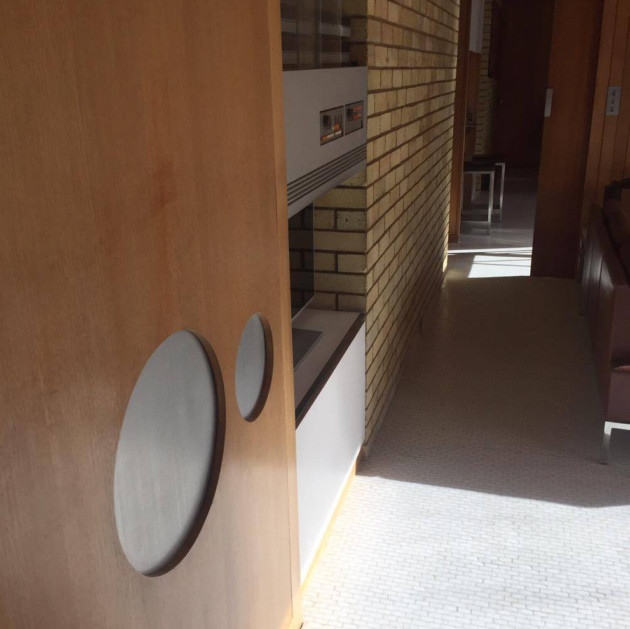 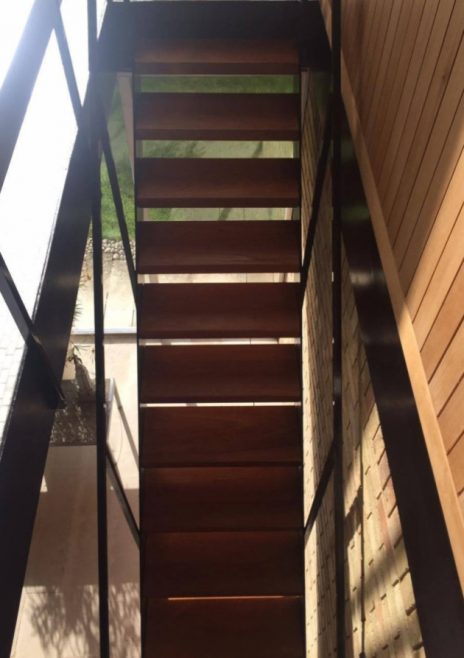 Stairs leading to the living area on the first floor 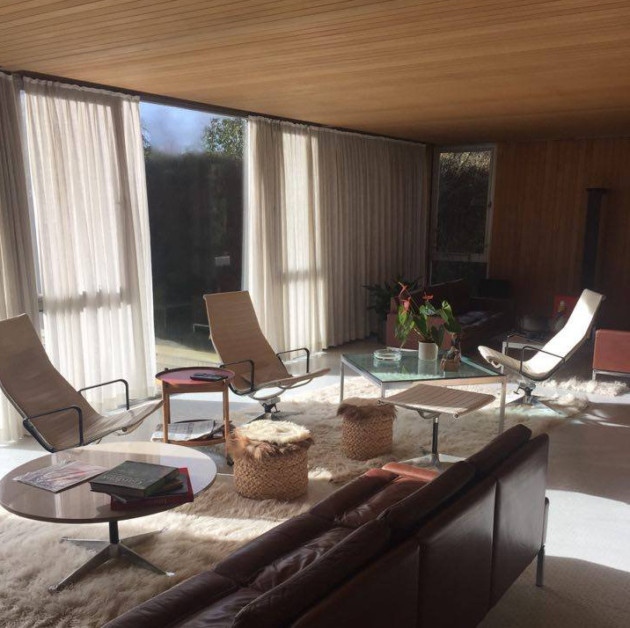