Architect of a 'House at Harpenden' - Field House in Townsend Road 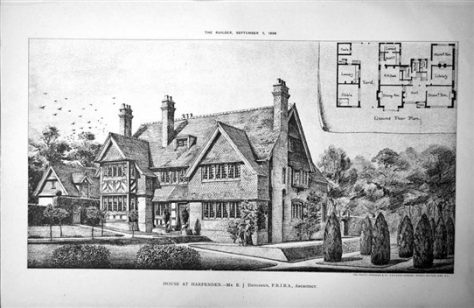 ‘A house at Harpenden’ by E J Dodgshun – Internet image from The Builder, 1898,

When we first saw an image of a ‘House in Harpenden’ designed by E J Dodgshun, as published in The Builder of 1898 with elaborate gardens surrounding it, we thought that perhaps it had not been built.

However, when the image was circulated on the ‘Old Harpenden, Years Gone By’ Facebook page, it was identified by Geoff Woodward as Field House. All gables, chimneys and other features match the front of the house on Townsend Road, though now much extended to meet the needs of the nursing home it became in 1985. The grounds in front of the house show artist’s licence.

Field House was designed and built for William Brigg BA, though by 1903 it was occupied by C. D’Arcy Leaver who is recorded in Kelly’s Directory as still living there in 1913/14. By 1922 it was the home of William A Pratt who lived there for over 20 years. In 1946 Mrs K J Pratt is listed, but probably shortly afterwards she sold Field House to Roland Walker, who is listed in the 1949 and 1952 Directories, and is fondly remembered – see comments on Field House.

It would be interesting to know how Dodgshun won this design contract, and whether he had other commissions in Harpenden. Edward J Dodgshun was born in Leeds in 1854, where he was articled to Thomas Ambler of George Street in 1870. He seems to have spent most of his life in Leeds, apart from the early years of his marriage to Lydia Sarah Dodgshun in Islington, London where they were living at 118 Tuffnell Park Road at the time of the 1881 census.  However by 1891, when he had been elected FRIBA, they were back in Leeds at Edward’s parents’ home, 10 Clarendon Road.  His registered offices were at 1/3 East Parade in the commercial heart of the city, where he designed several important buildings in the Headrow and Park Row. 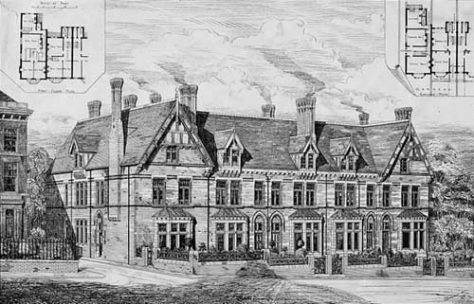 In 1877 Dodgshun designed a row of terraced villas in Hyde Terrace, and by the 1901 lived at 20 Hyde Terrace, a detached villa. According to information from Leeds Local and Family History Library, other members of the Dodgshun family also lived in Hyde Terrace – which bears some resemblance to Field House, designed and built twenty years later.

We know the house was built for William Briggs, a solicitor at 14 High Street from 1886 to 1902 but details of who built it and who designed and built our wealth of Victorian and Edwardian houses remains hidden in deeds or other family documents. We can build up a picture of the local building firms from their advertisements – such as William Sparrow, who was offering “elegance, utility, durability and economy … in all building operations committed to his charge” in 1886. This was the time when the first houses in Milton Road were being built, followed from 1896 by plots on the St Nicholas Estate being developed by Henry Steers and Henry Salisbury. However, only if residents look out any surviving deeds can we build up a picture of who was involved in the building boom before 1914.