Obituary in The Independent, 27 January 1995 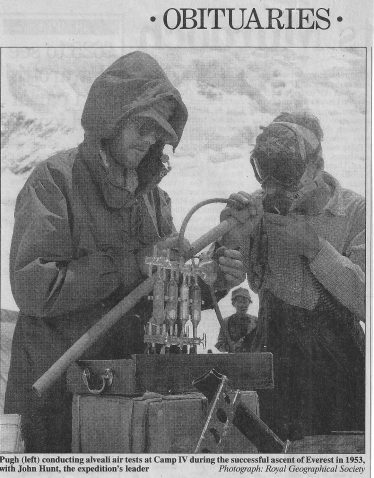 Harriet Tuckey’s  biography of her father, whose contribution to the successful ascent of Everest was long underestimated, was published by Rider in 2013, Everest – The First Ascent: The Untold Story of Griffith Pugh, the Man Who Made It Possible, ISBN 978-1-846-04365-9


Griffith Pugh was best known for his contribution to the success of the 1953 British Everest expedition led by John Hunt during which Edmund Hillary and Tensing Norgay made the first ascent of the highest mountain in the world. It was Pugh who insisted on the importance of the provision of adequate oxygen and of fluid for the climbers high on the mountain. This opinion was given not from the armchair but from experience on mountains and backed by meticulous scientific observations in the field. It therefore carried weight with climbers, who could be sceptical of scientists whose work was confined to the laboratory.

Pugh came from an old Welsh family; his father had been a barrister in Calcutta. He was a naturally gifted child and had no academic problems at school, cruising through Harrow and then reading Law at Oxford. He would rather have read Chemistry. He emerged with a thorough grounding in Roman Law which he felt was quite useless to him. However, through friendship with a psychiatrist he was drawn towards Medicine and returned to Oxford, where he was undoubtedly influenced by the strong tradition of physiology left by J S Haldane, recently retired from the staff there. He qualified from St Thomas’ Hospital in London just in time for service as a Medical Officer during the Second World War.

He had a varied war record, serving in Britain, Greece, Crete, Egypt, Ceylon, Iraq, Jerusalem and most importantly in the School of Mountain Warfare in the Lebanon. Pugh, who had some Alpine climbing experience before the war, was an expert skier. He had skied in the World Championships in the downhill and was selected for the cross-country squad for the 1936 Winter Olympics but could not compete because of injury. On the strength of this he was recruited to the Cedars School, where he spent a happy two years training raw troops, many of whom had never been on a mountain, far less worn skis, to become expert mountain troops to oppose crack German forces drawn from the mountains of Bavaria. He studied methods of selection, training and load ferrying on skis using the simplest of physiological methods.

After the war he found himself at 35 married and with no obvious career. Taking his Lebanon reports with him, he approached the Hammersmith Hospital and was given a house physician job there. Five years at the Hammersmith gave him a grounding in clinical research but the busy multi-faceted life of hospital research was not ideal for one of Pugh’s temperament. Fortunately for him, with the start of the Korean war in 1950 the Medical Research Council started a Division of Human Physiology headed by Professor Otto Edholm at its laboratories in Hampstead; Hampstead became the base for Pugh’s work for the remainder of his career.

Soon after Pugh started there Eric Shipton approached him regarding oxygen equipment for the forthcoming Everest expedition. Pugh decided that information necessary for the proper design of masks and apparatus would have to be obtained at altitude from acclimatised men. Hence he was included in Shipton’s 1952 Cho Oyu Expedition in preparation for Everest. On this trip Pugh did vital studies on the rates of breathing in climbers and on food and fluid intakes, all of which helped in the planning of the next year’s expedition. On Everest itself Pugh continued his physiology, now addressing more basic questions about altitude acclimatisation.

After Everest in 1953, Pugh turned to problems of cold. 1956-57 was the International Geophysical Year when Vivien Fuchs and Hillary crossed Antarctica. Pugh was with the New Zealand team, his third expedition with Hillary, working on cold and the hazards of carbon monoxide poisoning in Antarctic tents and huts. At this time the two of them dreamed up the idea of a scientific and mountaineering expedition to the Himalayas lasting nine months, as was common in Antarctica, to study the long-term effects of altitude. This dream was realised in the 1960-61 expedition known as the “Silver Hut” expedition led by Hillary, with Pugh as scientific leader. The winter was spent at 5,800m in the prefabricated hut before an attempt was made on Makalu (8,400m) in the spring. A tremendous amount of physiological work was done on many aspects of heart and lung responses to this prolonged period of low oxygen, both in the silver hut and higher on Makalu.

This was probably the high point of Pugh’s career, though he went on to do important work on cold and hypothermia. When cross-Channel swimming became popular he worked on how the swimmers avoided hypothermia. He showed that only if you have a good insulating layer of fat can you withstand the hours in cold water. Characteristically he was himself the principal control subject who became hypothermic while his cross-Channel swimmer subject remained warm.

In 1968 the Olympics were at Mexico City at 2,300m and Pugh studied the effect of this altitude on athletes’ performance. He predicted correctly that the altitude would increase times for long-distance events but the reduced density of the air would give a small advantage to sprint events. He investigated the deaths of youths involved in outdoor pursuits. Lessons from his work have been learnt by those involved in running these activities and by clothing manufacturers, so that despite the great increase in numbers venturing into the hills in all weathers the number of cases of hypothermia has diminished.

Griff Pugh was in the direct line of great British eccentrics. Anecdotes of his absentmindedness abound. He frequently could not remember where he had left his car parked in London and would take the train back to Harpenden and report his car stolen. The police would eventually recover it. The story that on one such occasion his children were in the mislaid car is probably apocryphal.

His latter years were clouded by a series of accidents which left him considerably crippled. He coped with this disability wonderfully and continued sailing Pelican, his 35ft catamaran, for many years.