A talk to the Society by Dr. Isobel Williams at a meeting held on 29 April 2014. 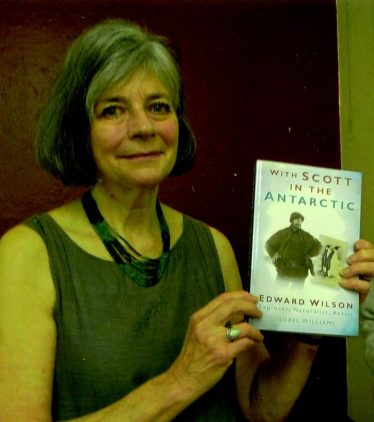 Dr. Isobel Williams’ excellent talk was illustrated with slides of Wilson’s family, of his paintings and of the Expeditions. She began with Wilson’s local connections: Pat Wilson, his near relative, was a Harpenden resident and the architect of All Saints’ Church. Apsley Cherry Gerard, his fellow explorer and dear friend, lived in Wheathampstead.

Edward, a hospital doctor’s son, was born and brought up in Cheltenham. Isobel showed examples of his daily sketches from an early age, subjects exploring his lifelong love of natural history. After attending Cheltenham College he read Natural Sciences at Gonville and Caius, Cambridge, followed by St George’s Hospital for his clinical work and MB.

An offer from Scott: the first expedition 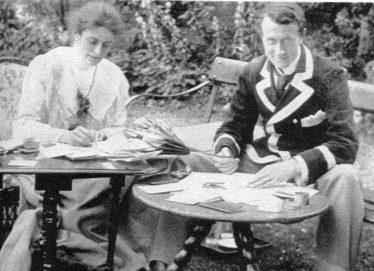 Oriana and Edward, working together – Scan from ‘With Scott in the Antarctic’, By Isobel Williams, published by The History Press

In 1898 two major events occurred: he met Oriana, his future wife and soul mate, and he developed symptoms of tuberculosis. At this time, the only treatment was to “breathe pure air”; he spent several months in Norway & Switzerland gaining strength. On his return, while considering how and whether to pursue his medical career, he received the offer to accompany Capt Robert Scott on the National Antarctic Expedition as naturalist, artist and junior doctor to Dr Koettlitz. This opportunity he accepted with enthusiasm. Three weeks before departure he and Oriana were married; it was spoken of as a “marriage of minds”, affording him that sense of affinity and grounding that sustained him in the gruelling years ahead.

On 24 December 1901 the Discovery began the long journey via New Zealand to Antarctica. His main medical task was to do “scurvy checks”, looking for signs of swelling of joints, erosion of flesh. Daily he tasted and smelled the men’s tinned food, attempting to discover whether putrefaction of the contents might be leading to ptomaine poisoning. His non-medical duties included skinning of the animals being retained for research purposes, and in recording the changing landscape through his prolific drawings and paintings. Wilson depicted the Ice Barrier in accurate and impressive colouring; many of his works can be seen in the Polar Research Institute in Cambridge. Turner’s influence is evident in his work, landscapes of clouds, ice floes, and of the active volcano Mount Erebus. The aims of expedition were: to chart the Antarctic coastline and land, and to reach the nearest possible part of the Pole. At this time the interior was unknown territory. Having explored the Ice Barrier the party made their base at Ross Island, leaving messages in bottles as markers for others.

In 1902-3 a Southern journey was undertaken by Scott, Shackleton and Wilson. This arduous time cemented a deep friendship and respect between Wilson and Scott. There were major difficulties: the dogs would not pull, were malnourished, and of the 19 dogs they started with none survived. Unlike the Norwegians the British were ignorant of dog control. The grainy snow was un-navigable, but they got as far as 82 deg South before appalling conditions forced their return. All got scurvy. They suffered from snow-blindness and malnutrition. Sleeping bags were weighted with frozen sweat. Always the scientist, Wilson made an expedition to the Emperor Penguin colony, but coincided with the wrong season for finding eggs.
1905 On return to England Wilson was offered work with the Grouse Commission, investigating a disease which was destroying the birds. During the 5 years he worked on this he identified the cause and how to allay its effects. In 1907 Wilson was invited by Shackleton to join his expedition as second-in-command, but he refused regretfully as the continued grouse research took precedence. This was complicated by the rivalry between Scott and Shackleton over rights to sponsorship and morality of “first go”, with Wilson as the peacemaker between the two. However, at the end of 1907 he felt able to accept Scott’s request for him to join his expedition when he became available at the end of 1908. 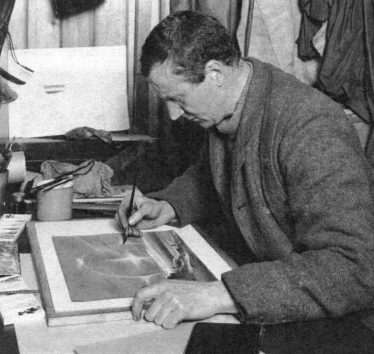 Edward Wilson at work on one of his paintings -Scan from ‘With Scott in the Antarctic’, By Isobel Williams, published by The History Press

The Terra Nova, a three-masted wooden whaling vessel, set out from Cardiff on 15 June, the object of the expedition being to reach the Pole. Wilson was leader of Scientific Staff, aiming to develop the researches begun on Discovery. They arrived in South Africa in mid-August, whereupon Wilson was ordered by Scott to accompany the three wives from there to Melbourne on a steamer; a fraught journey complicated by dissent among the wives. The Terra Nova arrived ten days later, on 12 October, and it was there that Scott received the startling news that Amundsen, the Norwegian explorer, was proceeding to the Antarctic. Scott now knew he was involved in a race, but decided to continue with the scientific programme and the attempt to reach the Pole. Preparations were completed when they reached New Zealand, including the introduction of ponies.

Wilson’s further attempts to find newly hatched eggs of Emperor penguins, with “Birdie” Bowers and Cherry Garrard, aimed towards groundbreaking embryological study, involving a journey of 60 miles in the middle of winter. This is vividly described in Garrard’s book “The Worst Journey in the World”. They built a primitive hut above the colony near Cape Crozier, found five eggs, dropped two on the return journey, and the remaining three are in the Natural History Museum. They encountered extreme conditions: blizzards, intense cold and frostbite, and were fortunate to escape with their lives.

The Polar Assault and his legacy

Five men out of sixteen were chosen for the final assault: Oates, Scott, Bowers, Evans and Wilson. (Here, Dr Williams showed the brief original moving film, shot by Ponting, of the men setting out.) They reached the Pole to find that Amundson had preceded them thirty-five days previously.

On the return journey they were plagued by malnutrition, hypothermia, dehydration and fatigue. First Evans died, then Oates walked out to his death, and the last three were found in their tent eight months later.

Wilson was a dedicated scientist; man of deep religious faith; doctor, naturalist, artist, explorer and the only one to go with Scott on both expeditions. Above all he was renowned for his integrity and compassion. Isobel ended with Garrard’s words: “If you knew him you could not like him, you simply had to love him.”

Dr. Williams is the author of a biography of Edward Wilson, “With Scott In The Antarctic – Edward Wilson, Explorer, Naturalist, Artist”. Published by The History Press, ISBN 978 0 7509 4879 1