You are here: HomenextHarpenden HistorynextPeoplenextAdventurersnextGeorge Hogg & his life in ChinanextRewi Alley's tribute to George Hogg in 1945

Dr. A. H. Watts quotes Alley's poem in his Headmaster's Report on The War Years 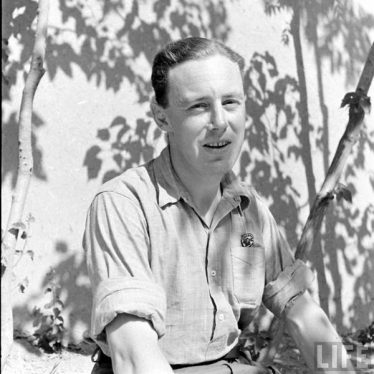 George Aylwin Hogg is known in China as a hero after saving 60 orphaned boys during the Second Sino-Japanese War. His great leadership skills made him head boy of St George’s in 1933. He walked 700 miles with his pupils to set up a new school in an abandoned temple in Shandan. His death in 1945 was due to a tetanus infected wound while playing football with the boys.

Dr Watts proudly explains, “he served his time, and generation, and mankind, and died in all his pride of great physical strength and strong intellect.” He also was moved by Hogg’s unselfish nature with the students and him adopting “yet more children” led Watts to say, “we honour his love for Chinese children, his care for them.”

Rewi Alley was a writer and political activist who moved to Shanghai, China, in 1927, aged 39, where he ended up a secret member of the Communist Party of China. Alley talked of Hogg to a journalist saying he was “an outstanding young Englishman who fell in love with a foreign people and devoted his life to their betterment, and what he did made him deeply and widely loved.”

The friendship between the poet Alley and the courageous Hogg was most likely the reasoning behind Dr Watts paying tribute to Hogg by reading Alley’s meaningful poem attached as a document below.