Dora Barrett wrote her reminiscences about life in Kinsbourne Green, the hunt stables and her work as a Land Girl in WWII for the Society’s newsletters. This article about her first appeared in Hertfordshire Countryside, c1988

My introduction to Dora Barrett’s work

The picture of the Arab horse which hangs over my daughter’s fireplace is not just a print, purchased on Saturday afternoon from a High Street store. It’s a pastel painting of a very special horse, portrayed by a very special artist – Dora Barrett.

I first met Dora Barrett when she came to our club to tell us about her work as a sculptress. She brought with her several models of different animals.

On hearing of my daughter’s beautiful Arab horse, Dora asked if the horse was pure-bred and on learning that he was, she asked if she could go and see him. She went, she saw and she was captivated. Dora made many sketches of Czar and took them back to her studio where she painted a superb portrait, which was later exhibited in Norfolk.

Six weeks later Czar was dead. The lovely young Arab stallion suffered a painful foot injury, for which there was no cure and had to be put down.

My daughter, Ann, was heartbroken. Dora gave Ann a few months to recover before inviting us to her studio to see Czar’s portrait. The portrait of her beloved horse was as though he had come to life again standing in his field, his tail arched, his noble head held proudly. Dora handed the portrait to Ann “to remember him by”, she said. 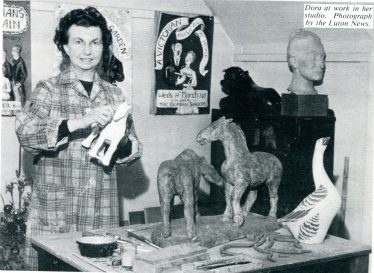 Dora Barrett in her studio

Dora Barrett is a small lady in her early sixties, unpretentious in manner and dress. Indeed one would pass this modest person in the street without realising that here was a highly gifted and determined character.

She has lived at Kinsbourne Green, near Harpenden, since she was eighteen, but was born in Luton, where her engineer father owned a garage. Luton was a medium-sized town at that time, prior to the growth of Vauxhall Motors and other industrial enterprises.

“My father and my paternal grandfather had inventive minds,” Dora told me. Together they invented the fore-runner of the zip-fastener. Her grandfather, a craftsman occupied with carpentry and wood-turning, also invented a plaiting machine, for use in the making of straw hats, a Luton industry. “I think I must have inherited my love for craft and the application of engineering to my sculpture from these two men,” she added.

Her love of animals became evident from early childhood. “I am told that I used to gurgle delightedly when passing an animal in my pram,” she said. “I showed particular joy when a horse passed and in those days there were many horses still on the roads of Luton, pulling drays of coal or beer, or railway horses pulling vans.”

No-one else in the family seemed interested in animals, but Dora was allowed to keep small pets as she grew up, such as a hamster, a rabbit, and later a dog. She didn’t own a horse until she was twenty, but was allowed to have riding lessons “for the sake of my health” at Farley Farm, which has now been replaced by the Farley Hill Housing Estate. Later she learned at the Mogridge’s Riding School, situated in Harpenden behind the Inn on the Green, which was at that time Mary Ellen’s Tea Shop.

Dora was educated in Luton at a Dames’ school, run by two Methodist sisters. She was far from robust in those days, and can remember being carried to a Guide meeting wrapped in a rug.

A gift for drawing …

“I was about five years old when we realised that I had a gift for drawing,” she continued. “I would draw pictures of my pets and of other animals from memory.” When Miss Boutwood, headmistress of the Dames’ School, retired she was educated at home. By this time Dora had joined the Royal Drawing Society’s ‘Red Book Scheme’, founded by Mr Abblett. This scheme was a type of drawing correspondence course, whereby you drew what subject you liked and sent it to London where it was placed in a large red book. You then received criticism of your picture from a well-known artist. There were periodic exhibitions of these drawings at the Guildhall and prizes were awarded – bronze, silver and gold medals, a Princess’s prize and the Abblett prize.

… and for clay modelling

“When I was thirteen,” said Dora, “my mother gave me a lump of clay one day and this started my clay-modelling career. Two years later I tried my hand at wood-carving. I was commissioned to carve a friend’s Sealyham dog and I now have a replica of this dog as a doorstop.”

By the age of seventeen her health had improved which enabled her to enrol at the Westminster School of Fine Art where she studied drawing and painting. She travelled up to Westminster three times a week.

… and for sculpting and carving

I asked Dora when she received her first tuition in sculpture. “At the onset of war,” Dora replied. “The Westminster School of Art was taken over by the military and we students were dispersed. I was found a place at the Central School of Art in Southampton Row, in the pottery department. Here I was taught pottery technique and turned failed pots into animal figures.”

A studio was made for Dora upstairs in the family home and a smaller adjoining room became a gallery for displaying her favourite models. By this time, Dora’s fame has spread and most of her work was commissioned or sold at exhibitions. 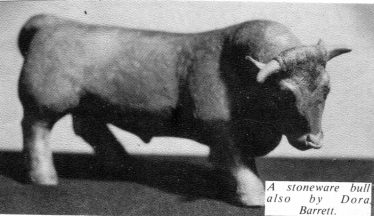 “My father helped with my sculpture until his death a few years ago,” continued Dora. He used his engineering skill and inventive ability to devise ways of holding material still so that both her hands were free to work on the sculpture. He also thought out suitable supports for the larger models such as chicken wire, plaster of Paris and papier maché.

“I now work in wood as well as in clay and terracotta,” said Dora. “When I’m out for walks with my dog Max I sometimes find a piece of wood which gives me an idea as to some animal it could represent and I take it home to carve.”

Dora gets most pleasure from sculpting animals and pays frequent visits to Whipsnade or the London Zoo to make preliminary sketches. From these drawings she makes her sculptures, firing them in a kiln kept in an outhouse. Sometimes too she is commissioned to sculpt or draw people’s children or pet animals. A bust of a member of the Luton Girls’ Choir now stands in the library at Luton. This particular bust is cast in bronze. She has to take the sculptures to a foundry at Fulham to have them cast.

Although both her parents have died, Dora still lives in the family home with her dachshund Max for company. The upper floor, apart from the studio and gallery, has been turned into a flat.

I asked Dora to describe a typical day in the life of a sculptress. “I get up at 7.30 each morning, make some breakfast and carry it back to eat in bed,” she said, “because the house is large and cold and the central heating old. Then I dress and do the household chores before taking Max for a walk. I settle down to work in the studio at about 10 o’clock. I work all morning until I am at a stage where either the work can be left or my hunger calls me to make some lunch. If I find the sculpture is not improving I take a break and return to it later on with a fresh approach. I often used to work late into the nights, but now I work while the light is good. 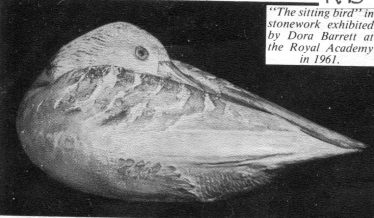 Bird, by Dora Barrett – exhibitied at the Royal Academy in 1961

Ever since the age of twenty-one (1947?) Dora has had her work exhibited at the Royal Academy; but recently the packaging and drive to Piccadilly have proved too much for her and she is content to exhibit out of London.

In the long, light studio sketches lined the walls, sculptures, finished and unfinished, stood around the floor. We passed out through the gallery and downstairs to the lofty hall into the gracious drawing-room to have coffee by the log fire.

All round the house, amidst the family antiques one finds Dora’s treasures. My favourite sculpture was a sow feeding her piglets. You could almost hear the sow’s low contented grunt, and was that a wriggling among the competitive little bodies? A noble horse dominated the bookcase and there was a little dog, eyes turned, pleading upwards, paw raised in anticipation.

Dora Barrett’s empathy with people and animals and her enviable skill in bringing them to life is a great gift and one which she accepts with humility and uses with responsibility.

As I drove away down the broad drive, past the tree-lined lawn, I thought to myself “we have a sculptress in our midst and we never knew it!” 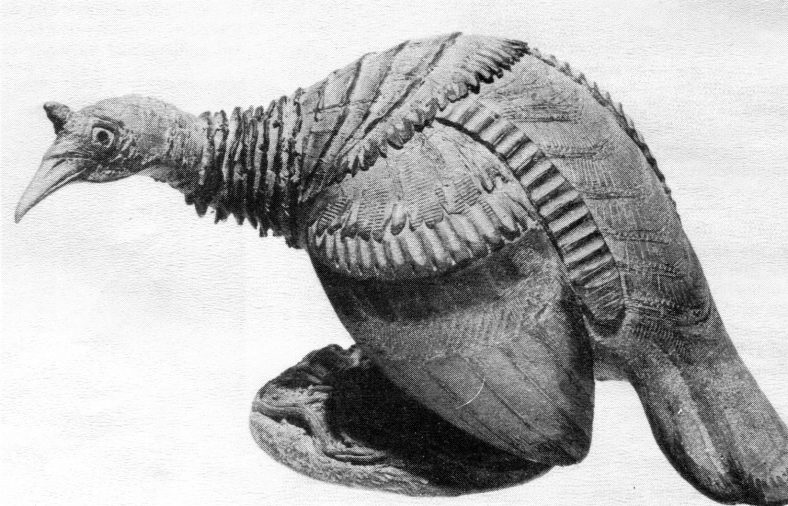 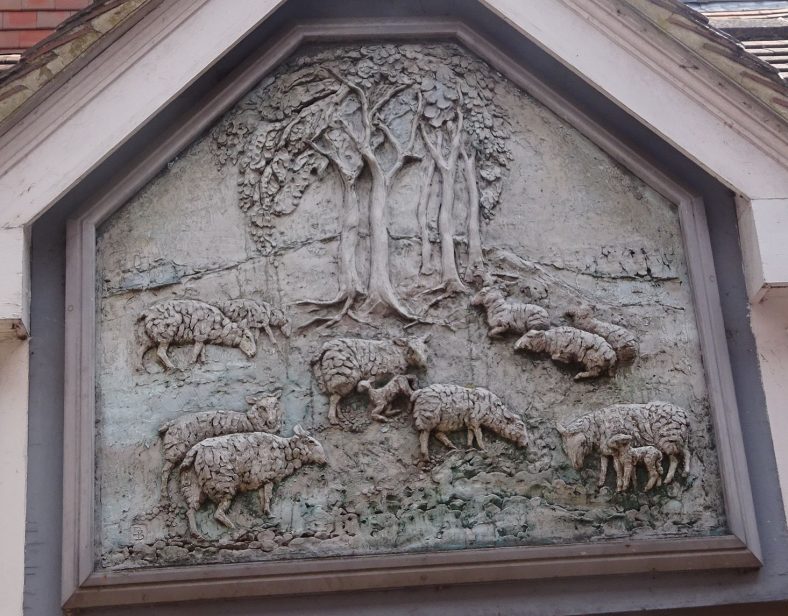 The Baalamb trees by Dora Barrett, in the inner courtyard of The Leys passage between the High Street and Leyton Road