Man focused on capturing our heritage 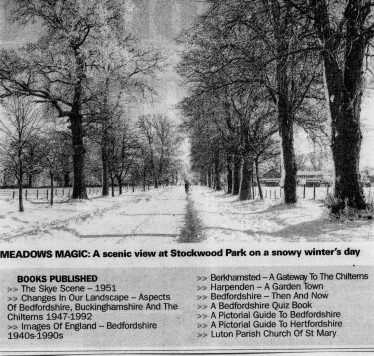 A popular Luton photographer, who also wrote several books about the town and the rest of Bedfordshire, has died, aged 85. (in 2009)

Eric Meadows was well known in the town for his passion for pictures and for his books, which chart the changes in landscape in the area over many years.  And in a testament to his great skill and knowledge the octogenarian was still fielding enquiries and requests for his photos in the last few weeks of his life.

Born to Charles and Linda Meadows in Studley Road, Luton on January 30th, 1924 Eric grew up in the town and was a pupil at St Gregory’s Prep School in New Bedford Road, before moving to St Albans School.  He had one brother, Denis who emigrated to Australia and the family often took their holidays by the coast of Devon and Cornwall or in Wales, where Eric took many photos of landscapes and historic houses.

Working at Rothamsted in the 1930s

Eric began his working life at Rothamsted Experimental Station, Harpenden, before joining the army during the war.  When he returned, he took a job with Luton Water Company, where he worked for many years, interspersing work with ventures abroad.  He toured Norway, Iceland and Greenland – even walking on the ice cap- during the late 1950’s and early 1960’s.

In 1962 Eric met sweetheart Muriel May Pierce and, after a short engagement, the couple married at Sunnyside Church in Berkhamsted on January 19th 1963.  The ceremony took place amid snowstorms and many guests were unable to get there.  The newlyweds settled in Felstead Way, Luton where Eric converted part of his garage into a darkroom and honed his photographic skills.

He and Muriel had no children of their own, but they offered their home to their nieces and nephews during school holidays.  The visiting youngsters were treated to exciting trips to historic houses or the Chiltern Hills, where they became part of the landscape as “extras”.  His niece Helen Merrifield said:  He was very kind to us when we were little kids.  My parents were often ill and we ended up living with them on and off.  He used to think it was great fun having us posing for him.  He would often go to the park and he would say: ‘ Stay there, just like that'”

Eventually, Eric gave up paid employment and became a self employed photographer, selling pictures to calendars and also writing and publishing several books – some of which can still be found in local book shops.

In the 1960’s Eric and Muriel moved to Harpenden, where green-fingered Eric indulged in his passion for gardening.  He took great delight in growing flowers and fruit and had an amazing memory for their Latin names.  Helen said:” He was a keen gardener.  He would pick his fruit and my auntie would bottle it for him.”

Eric also enjoyed regular trips to Scotland, avidly snapping autumn colours and deserted white beaches in the far north.  Helen said:” He would go trekking for days to some of the most remote places you could ever imagine.”  On his return, he put on slideshows of photographs for family, friends and ramblers associations.

Eric was also a keen church-goer and sidesman at St Mary’s Church in Luton for many years where he also recorded in pictures, the choirs and bellringers at work.  When he stopped driving he continued his worship at in Harpenden at High Street Methodist Church.  He belonged to numerous associations, including the National Trust, John Muir Trust and the National Childrens Home.

Eric, whose wife died in 2001, celebrated his 85th birthday at the end of January at home.  Helen said:” But for the dedicated care and kindness of various neighbours and friends, he would not have been able to remain at home as long as he did.”  But within days he was back in hospital and died on February 26 2009.

A funeral service was held at St Mary’s Parish Church, Luton on March 19th followed by cremation at Luton Crematorioum at Stopsley.

(After note:  Many of the photographs on this website were taken by Eric Meadows.  He also made high-quality copies of earlier photographs of Harpenden, specially for the Local History Society.)