An appreciation by Pat Wilson and an obituary from a newspaper 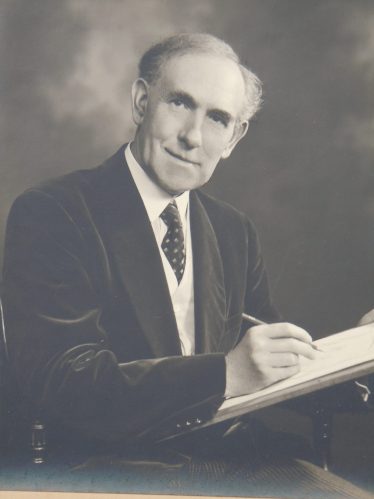 The Society holds two sources of information about Ernest Hasseldine, artist.  An article in the Society’s Newsletter No. 21 p7 by Patrick (Pat) Wilson and a newspaper cutting of an obituary.

Ernest Hasseldine was a professional artist.  He is better known in Harpenden for his watercolours of local scenes, some of them done for his own pleasure but many commissioned by local residents.  He always painted or sketched on holiday, especially the mountains and lakes of Cumberland and, over the years with particular enjoyment, the scenery of Norway, Switzerland and Italy.

Although watercolour was Mr.Hasseldine’s favourite medium, to his regret he was not widely enough known to earn a living in it and his bread and butter was earned by pen and ink drawings. For many years he illustrated various educational publications of the Harmsworth Press such as the Childrens’ Encyclopaedia (later My Magazine), of which Arthur Mee, the Editor, was a close friend. He also worked at composing and illustrating publicity material for various religious and charitable bodies. Among these were the Church Army, the Salvation Army and, later the South London Mission in Bermondsey. This work was always close to his heart and he spent time in the slums, seeing for himself and talking to the people on whose behalf he was appealing.

At home, he was a member of the committee which raised funds for Harpenden’s Nursing Centre and, later, the Red House Hospital. He had a lively appreciation for the local scene and was always concerned to safeguard Harpenden’s amenities.  He was a member of the Harpenden Preservation Society from its inception in 1930. In the twenties, he designed the War Memorial on Church Green and visited Cornwall with Eustace Salisbury, the Architect, to choose the granite for it. In spite of having to work at his talent for a livelihood, now and then producing an obvious pot boiler, Ernest Hasseldine had a real gift, as well as an enviable technical skill, and with these his love of landscape stayed alive and inspired a number of genuinely moving pictures during his lifetime.

Pat Wilson acknowledged the help of Howard Hasseldine (Ernest’s son) for the facts in this appreciation.

Harpenden has lost a public-spirited resident by the death of Mr. Ernest Hasseldine, the well-known artist, of 4, Overstone Road,who passed away in Harpenden Auxiliary Hospital on Friday, after six weeks’ illness.

Aged 69, Mr. Hasseldine was a native of King’s Lynn Norfolk.  He was educated in London and trained there for his profession as a black and white artist.

Making his home at Harpenden forty years ago, for health reasons and because the charm of the place attracted him, he soon began to take an interest in local affairs.

He declined nomination for the Urban District Council because he was not robust physically, but played a useful part in the life of the community in other ways.

While Harpenden was growing rapidly he was eager for the retention of the district’s natural amenities wherever possible.  An outspoken critic of anything which appeared likely to offend the eye, he attacked by cartoon and otherwise the new Public Hall, which was out of harmony with the adjacent property in design and, until it toned down, in colour also.  Previously he had been much concerned over an apparent threat to the existence of Bowers House, the fine old building in High-street now hidden by a row of shops and offices. 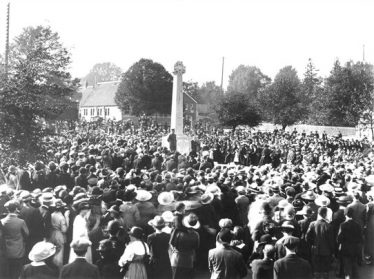 Dedication of the War Memorial, October 1920

Mr Hasseldine placed his artistic talents at the disposal of Harpenden in a practical way,his chief contribution being in connection with the memorial which was erected after the last war.  With Mr Stanley Salisbury he designed the Celtic Cross of Cornish granite which stands on Church Green.

In more recent years he designed the Village Sign which Harpenden Preservation Society, of which he was a member, placed on the Common.  These designs, together with others in connection with local nursing and hospital services, were executed by him entirely free of cost.

In the course of time, he held many other offices in the church.  He was also a member of the old Harpenden Nursing Centre Committee.

As a black-and-white artist, Mr Hasseldine’s work was mostly of a religious character and connected with advertising.  His hobby was the depiction of local and foreign scenes in watercolours.  He had a vivid colour sense and produced many beautiful and arresting pictures.

Mr Hasseldine married Miss Edith Mary Barrett of Hampstead, who survives him, together with one son, Mr Howard Ernest Hasseldine who is serving in the R.E.M.E., and one daughter, Mrs. Jackson Summerson of Luton.

The funeral service in Harpenden Methodist Church on Tuesday was conducted by the Rev. C. C. Mayes assisted by the Rev. Walter Spencer, a former minister of South London Mission, where Mr Hasseldine was a helper for many years.

The hymn “The King of Love,” was sung, and Mr. Mayes in a short address paid tribute to Mr Hasseldine , whose life, he said, was well filled and well spent.

Mr E. H. Jones at the organ, played “O rest in the Lord” at the close of the service and the internment was in Westfield Cemetery.

Further information on Ernest Hesseltine can be found on the page by his grandson, Des Summerson and some of his sketches, paintings, family photographs and other items at  a selection of sketches and paintings by Ernest