The St Christopher and Memorial windows

Alison Edmonds prepared these notes for the European Heritage Weekend – In the Steps of Frank O Salisbury – on 15 September 2013.

Saint Christopher was the patron saint of the NCH and the lines from St Matthew’s Gospel, Chapter 25 v.40 encapsulate the thinking behind the design: “In as much as ye have done it to the least of my brethren, ye have done it unto me.”

The window was designed by the Harpenden-born artist Frank Owen Salisbury who was himself a Methodist and a strong supporter of the work of the NCH.

In the legend, St Christopher was bound to perform a particular penance which was to carry pilgrims across a turbulent river where previously many had drowned. He was reputed to be a very strong man with a dark visage. We see St Christopher in the centre of the window with the Christ Child on his shoulder. The legend tells that a small child asked to be carried across the water and Christopher expected an easy journey but as he entered the water it became deeper and more turbulent and the child’s weight on his back became nearly unsupportable. On finally reaching the opposite bank, the exhausted Christopher asked the child why the burden had become so great. “It is because you have carried the sins of the whole world,” the Christ Child answered and vanished.

In the window we see Christopher entering the river, his foot just into the water. He has the heavy, dark look of the legend. He carries the red pilgrim’s scallop shell, which was the motif of the NCH. The Christ Child looks out towards us, His right hand raised in blessing and in His left hand, the orb of kingship.

From these central figures concentric circles of light suggest a sunburst. A further blue circle contains cherubs and cherub heads with words identifying it as the circle of beauty and truth. The words – reading from the left – are Truth, Hope, Joy and Peace. Love occupies the centre, and on the right are Alms, Honour, Power, Glory and Charity: values which reflect the work of the NCH.

Beyond this is a further, larger circle, identifying the duties of life which serve the greater virtues. The circle of service reflects the skills and trades taught to the children at Highfield. The figures are winged angels, very finely depicted with each figure differentiated and reflecting the work portrayed. On the left we see the arts: a painter, a musician, an embroiderer and a writer.  In each case the free flow of movement in the figure is beautifully realised. On the right we have the natural sciences and the activities they give rise to: an angel with a sextant, a stonemason, a chemist and an engineer.  The figures are angelic but also reflect the qualities of the children who were cared for and grew up at Highfield.

The two outer lights are linked by the arc of the rainbow. At the centre point where St Christopher stands, the arc of the rainbow becomes the water of the river.  The rainbow is a recurring image in Christian art. When the Great Flood receded and Noah made an altar to the Lord, God said: “My bow (rainbow) I set in the cloud as a sign of the covenant between myself and the peoples earth.” (Genesis 8.20 and 9.1-17).  A rainbow often forms the throne on which sits Christ the Judge at the Last Judgement. Because of its symbolism, it was often employed by Frank Salisbury in the design of his windows.

In this window, the rainbow links the birth and death of Christ. In the lower left light, the Virgin Mary sits in her blue robe and the Christ Child stands by her on the grass. Their scroll reads: “Their angels do always behold the face of my Father which is in heaven.” (Matthew 18.10) If this light shows the Incarnation of Christ, the lower right light has a standing figure of a saint, possibly Gabriel, beside a large wooden cross reflecting sacrifice of the death of Christ. The scroll on the right reads “I came that ye might have life and ye might have it more abundantly.” ( John 10.10) 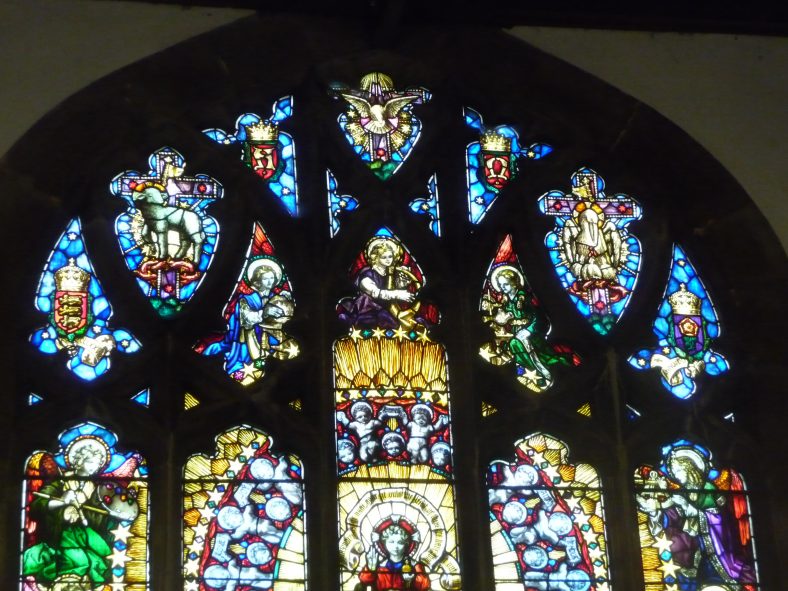 The top lights also have traditional images from Christian art. On the top left is the Lamb of God, the Agnus Dei. The lamb personifies innocence, patience and humility and is recognised as a sacrificial animal. The words Lamb of God appear in John 1.29 when John the Baptist sees Jesus and exclaims “Behold the Lamb of God who takes away the sins of the world.” The lamb is usually portrayed standing with a halo holding a pennant with a red cross on a white ground.

The upper lights also have the large A (Alpha) and O (Omega) the first and last letters of the Greek alphabet. They appear in the Book of Revelation “I am the Alpha and the Omega” (Rev 1.8) ( I am the beginning and the end).  This image is often used as Christian symbols of the eternal nature of God.

In the topmost light is the dove, the Holy Spirit , presiding over all.

The dedication plaque is placed centrally in the lower lights of the window and the inscription reads: “This window was presented to the Glory of God and in the interest of the nation’s children by Alderman Sir Charles C. Wakefield, Bart, 1928.”

The window is remarkable for the coherence of the whole design linked to the legend of St Christopher but incorporating the life and work of the children of the National Children’s Home. It is designed with delicate delineation of the features of all the figures, unsurprisingly, as Salisbury was a renowned portrait painter. Moreover, the colour range and subtlety is a tribute both to Frank Salisbury and also to the abilities of the craftsmen at Hawes and Harris of Harpenden who carried out his design so successfully. 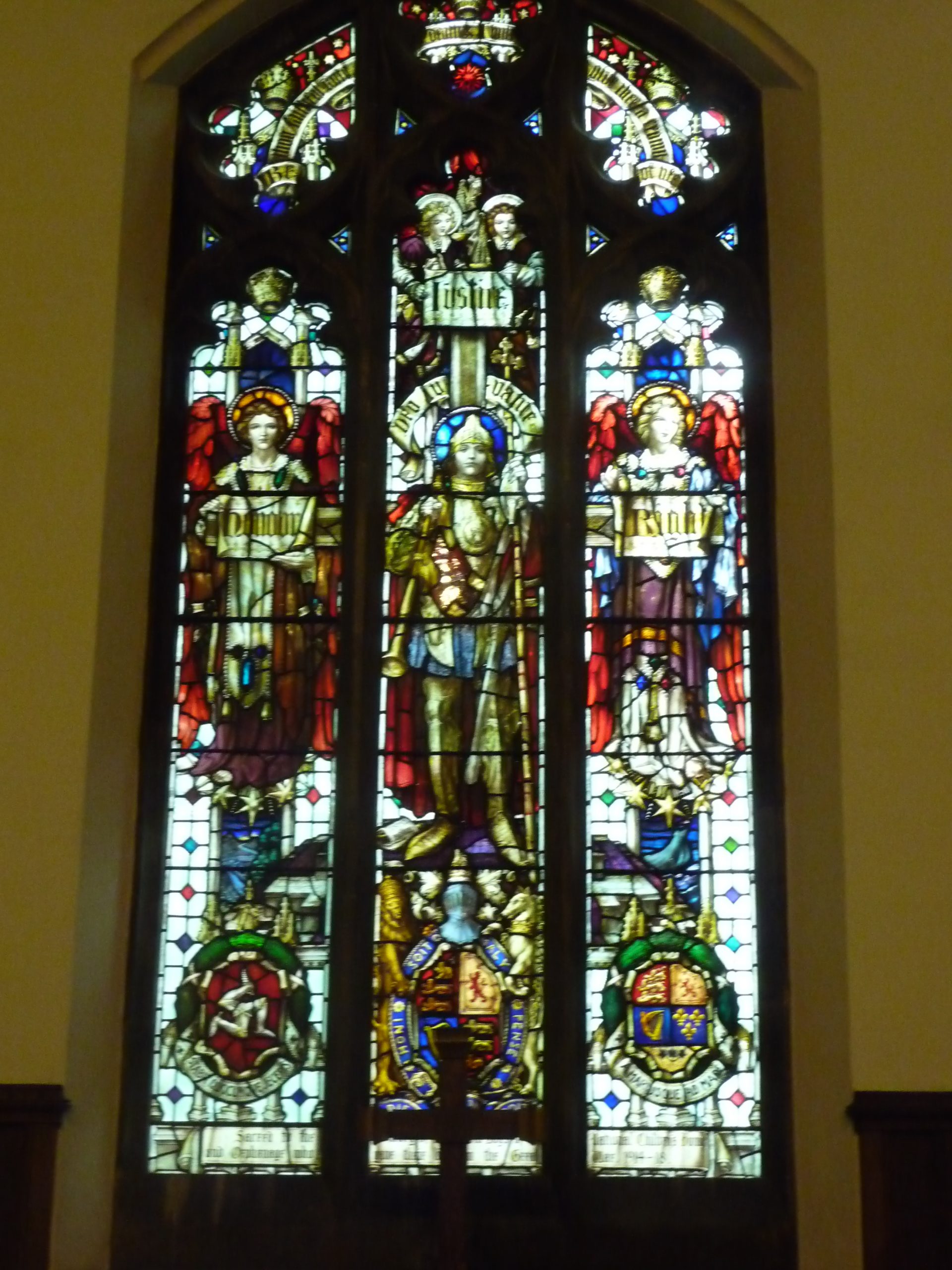 This window is a memorial to those men from the National Children’s Home who served and died in the Great War. It was dedicated in April 1920 and was unveiled by Mr Francis Horner, a co-founder of the NCH with Dr Stephenson. He paid eloquent tribute to “the memory of the 126 dear boys of our own who laid down their lives that we might live.”  The window was designed by Frank Owen Salisbury, the Harpenden–born artist who was well known for his portraiture, his paintings of great state occasions and for his stained glass. The NCH was a Methodist foundation.

This window has three main lights representing Justice, Honour and Right. The scroll on the top three lights reads: “Be faithful unto death and I will give thee the crown of life.”  (Revelations 2.10). Below the banner are two angels carrying the scales of justice.

The central figure stands in front of a large wooden cross headed with the word Justice. Justice is a warrior figure, a soldier of Christ, and his armour reflects the words of Saint Paul in The Epistle to the Ephesians 6.14.  Salvation is displayed on his helmet, Righteousness on the central boss of his breastplate , and Truth is marked on his blue skirt. On a scroll at his right foot are the words: Gospel of Peace.

In the light below the warrior is the Royal Coat of Arms of Great Britain.

The left light shows a crowned angel holding the word Honour. Below her is a delicate scene of the natural world and below that is the Coat of Arms of the Isle of Man with its motto: “Stabet quocunque jeceris” which means, ” Whichever way you throw me I will stand.”  There was a branch of the NCH on the Isle of Man.

The right hand figure is another crowned angelic figure holding the word Right. Below her is a sea scene to balance the scene of nature opposite, suggesting the spheres of land and sea over which the Great War was fought. Below that is the coat of arms of Canada with three maple leaves at the base.  The words “A marisque ad mare” (from Psalm 72) are the motto  for Canada and means, “From sea to sea”. It commemorates the branch of the NCH in Canada.

Both angels have stars around their feet. 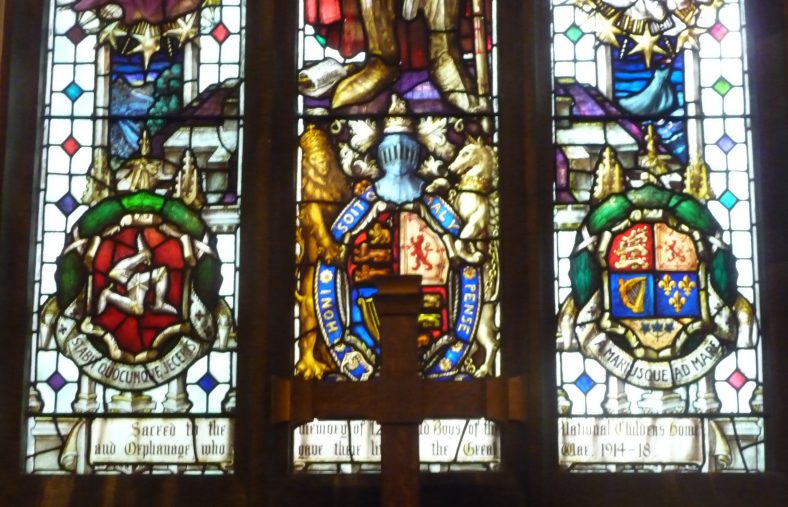 The dedication inscription runs along the base of the whole window: “Sacred to the memory of the 126 Old Boys of the National Children’s Home and Orphanage who gave their lives in the Great War 1914-1918.”

The whole window has a delicate framed pattern surround allowing plenty of natural light to enter. The craftsmen at Hawes and Harris, a Harpenden firm, were very skilled in reflecting the detail of the Salisbury design and creating the rich and vibrant colours overall. 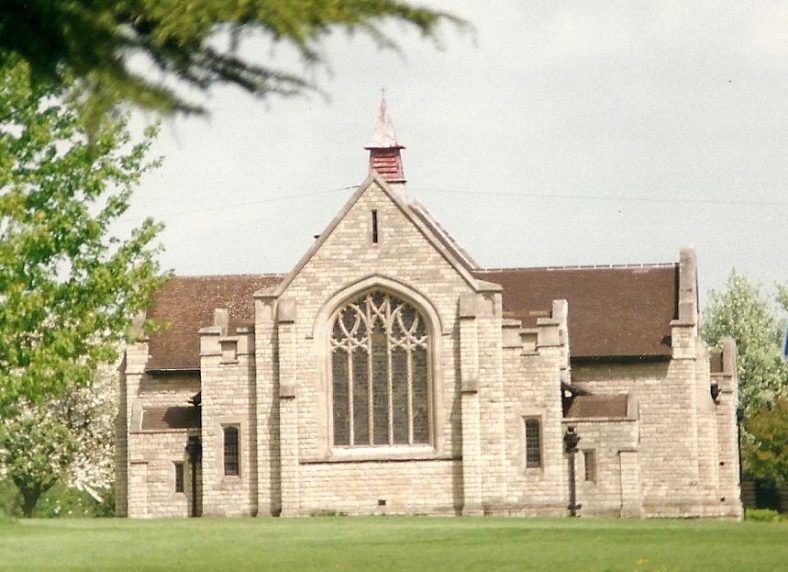