The story of a pageant painting

Extract from an article which first appeared in ‘Hertfordshire’s Past’, No.15, Autumn 1983. 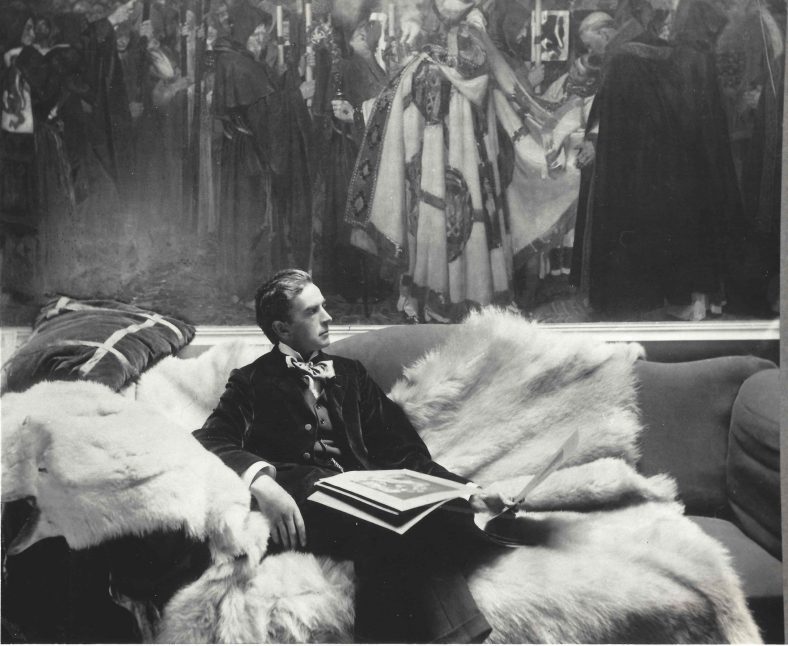 Frederick Thurston’s photo of Frank Salisbury in front of The Passing of Queen Eleanor, hanging at Red Gables, 1907

Salisbury ’s vast painting, The Passing of Queen Eleanor – depicting the queen’s funeral cortège* on its way to Westminster – was exhibited at the Academy in 1907. As the artist had been warned, it did not quickly find a purchaser, though it gained for him a commission to paint ‘The Trial of Queen Katherine before the Consistory Court of Blackfriars’ for presentation to the Palace of Westminster. After a tour of provincial exhibitions, The Passing of Queen Eleanor hung for over ten years in Salisbury’s studio, first in Harpenden, where it appeared in Frederick Thurston’s photograph, and later in Avenue Road, St John’s Wood. Eventually, in 1918, it was purchased by Alderman Arthur Faulkner, the Mayor of St Albans, for presentation to St Albans Abbey to commemorate the most recent deliverance of Jerusalem by the British Army. Queen Eleanor’s husband, Edward I, had been the last of the crusaders, and the deliverance of Jerusalem could be regarded as the completion of his work.

Between December 1966 and February 1968 a lively exchange of letters in Hertfordshire Countryside discussed the merits of this painting. Dr Frederick Brittain castigated it as “a grossly inaccurate parody of a medieval scene”. Salisbury had already explained his own position: “In painting an historical scene there are many problems to consider which make absolute accuracy difficult … To be correct the king should have been at the foot of the coffin, but that would have ruined the rhythmic beauty of the procession, so I had the effigy carried with the feet first.”

The picture had a special appeal for someone. On 13 October 1973 it was stolen from the Abbey, and has never been traced. It is ironic that Frank Salisbury had been told some sixty-five years earlier by St Charles Lawes, one of his sternest critics, that the ultimate test of a picture was whether one wanted to run away with it. Sir Charles said he had never wanted to run away with one of Salisbury’s!

* The subject was prompted by a pageant in St Albans. Frank Salisbury used participants in the pageant as models for the painting.

A Google search for this painting, produces an interesting link to the website of Bridgeman Art – http://www.bridgemanart.com/en-GB/asset/658780/salisbury-frank-owen-1874-1962/edward-i-and-the-passing-of-queen-eleanor-1908-oil-on-canvas  which indicates that a version of the painting dated 1908, 51.4cm by 121.9cm is in a “private collection”.

The website of Artnet http://www.artnet.com/artists/frank+o.-salisbury/edward-i-and-the-passing-of-queen-eleanor-j4Uyj_S5vYG7jlDRKQhJLA2  indicates that this version, measuring 20 inches by 48 inches, has passed through auction.

However the original painting is believed to have been 16 ft (nearly 4m) wide, and its whereabouts remain unknown.