Portrait in the Oval Office. 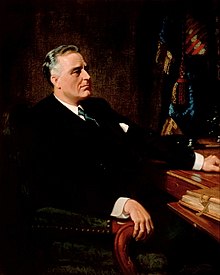 The celebrated Harpenden artist Frank O. Salisbury (1874-1962) painted five United States presidents though not all were stand-alone portraits. Each incoming President chooses new artistic décor for the White House to mirror his political aspirations.  President Obama chose the Salisbury portrait of Democratic President Harry S Truman to hang in the White House Cabinet Room; this was returned to its home at the Truman Presidential Library by Republican President Trump.

President Biden has reintroduced a Salisbury portrait, that of Democrat President Franklin D Roosevelt painted in 1935 and has positioned it in the Oval Office. The “Washington Post” describes its location above the fireplace mantel opposite the President’s desk as the “focal point piece” on “the powerhouse gallery wall”.  The Salisbury portrait is surrounded by smaller portraits of Presidents Washington, Lincoln, Jefferson and Hamilton.   Portraits of all the United States Presidents are on display in various parts of the White House with that of Roosevelt being the only one by a non-American artist.  When Roosevelt was asked to choose between the [twelve] portraits of himself he stated; “I am stumped by the problem of a portrait.  Out of the many that have been done, the family says (and I agree with them) that there is only one really good one – the one done by the Englishman Salisbury.”