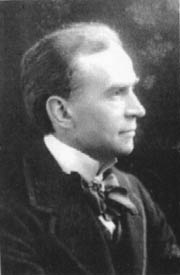 Francis Owen Salisbury was born in 1874 in a cottage next to his father’s bicycle repair shop and builders yard, situated near the present ‘Inn on the Green’ in Leyton Road, Harpenden.

When he was 15, Frank was apprenticed to his brother Henry James, who managed a stained glass workshop in Alma Road, St. Albans.  He gained a scholarship to the Royal Academy. He set up his first studio in Harpenden, and early in his career painted Sir Henry Gilbert, director of Rothamsted Agricultural Station. The portrait still hangs at Rothamsted Manor.  Sir Henry became one of Frank’s sponsors.

Frank married Alice Maud Greenwood, a St Albans girl, in 1901. Their first home – with a studio – was Elmkirk in Kirkwick Avenue, Harpenden. Twin daughters were born the following year.  Frank sketched them every day during their childhood, which meant working quickly. A few years later the family moved to Red Gables, a larger home and studio at West Common, now part of the Rothamsted estate.  In 1932 Frank commissioned his cousin to build a neo-Tudor mansion on Hampstead Heath which he called ‘Sarum Chase’. Many of his sitters would come there to his special studio with natural lighting. Frank Salisbury painted the leading society figures of his day on both sides of the Atlantic, including four US presidents and many industrialists. His specialism was large canvases of ceremonial events. 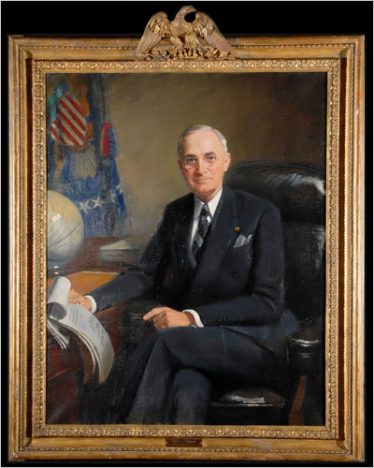 At the request of President Obama this portrait was hung in the White House Cabinet Room in 2009. It is on loan from the Harry S. Truman Museum & Library, Independence, Missouri.

His sitters included members of the royal family. He painted Winston Churchill more frequently than any other artist.

Frank Salisbury exhibited at the Royal Academy 70 times but was not elected a member. His favourite art form was stained glass: he was elected Master of the Worshipful Company of Glaziers and Painters of Glass in 1933.

Several works by Frank Salisbury may be seen around Harpenden. Prints of two of his great ceremonial paintings hang in the Town Hall: The Heart of the Empire, showing King George V and Queen Mary in St Paul’s Cathedral and The Coronation of their Majesties King George VI and Queen Elizabeth. A painting entitled The Lady on Red, was presented to the town in 1981.

At High Street Methodist Church, where the Salisbury family worshipped, a beautiful stained glass window commemorates Frank’s parents and his brother Henry James. In the church hall are two more windows depicting The Good Shepherd and TheLight of the World.  Paintings with religious themes hang in the Church.

In the chapel at Highfield Oval, the east window is a memorial to 126 old boys of the NCH who died in WW1, whilst the west window portrays St. Christopher above a rainbow, surrounded by children’s faces.

A mural in St Nicholas Church, Harpenden illustrates the birth of Christ.

St Albans museum holds four of Salisbury’s works which may be seen by appointment.

Information thanks to Nigel McMurray who gave a talk on Frank Salisbury illustrated with numerous slides on 31st October 2012 with additional research by Jean Gardner. This talk dealt with his work as a portrait artist .

By Joyce Bunting from information provided by Jean Gardner