Donated to St Nicholas Church by the artist in 1913 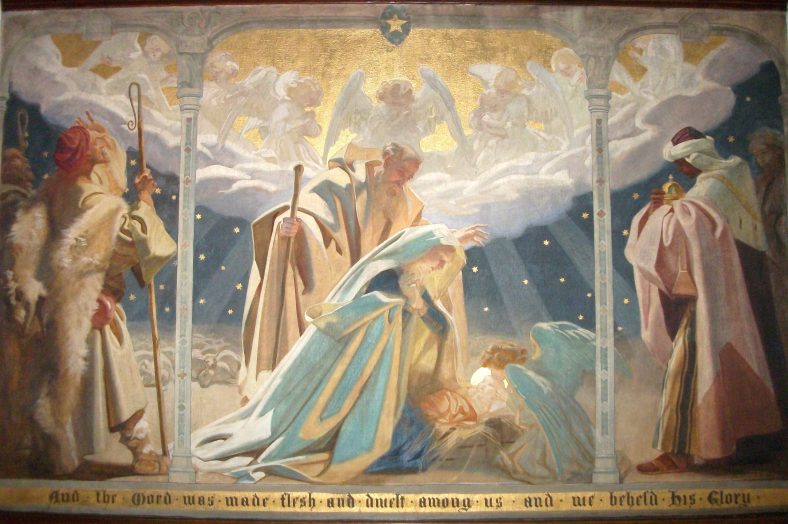 Frank Salisbury had already mastered the technique of the large format canvas when he designed and painted the mural for the Nativity Chapel which was installed in 1913. It was painted in his studio at The Red Gables in Leyton Road on canvas and marouflaged to the stone wall with a wooden frame to fit the space allotted, measuring a little over 6 feet by 10 feet 6 inches.

Marouflage is a 3,000 year old technique. Historically artists used several types of adhesives, from rabbit-skin glue to white lead ore, which was used in the 19th and 20th centuries. A thin coat of adhesive is applied to both parts. Once the canvas is mounted pressure is exerted to smooth the canvas and remove any bubbles. Paintings that have been marouflaged include the Louvre’s version of the Madonna of the Rocks and many of Turner’s canvases at the Tate Gallery (soucre, wikipedia).

A gift to the church

The painting in the Nativity chapel is a rare, but successful example of Salisbury’s use of the tryptich design. He must have been well pleased with his concept as he repeated it for Medah Cathedral in Hyderabad in a stained glass window in 1939.

It was described in a Nigel McMurray’s book as: “now badly faded, it is a dazzling representation of the Nativity. Here is the first example of the iconography which was to dominate his stained glass – separation of heaven and earth, with angels in a gilded heaven above from which light streams to the darkened earth below. An angel kisses Jesus’ forehead and an elderly Joseph and superbly dressed Mary look down in wonder.”

The theme of this painting is “And the word was made flesh and dwelt among us and we beheld His Glory”. This text is painted in black gothic lettering on a scroll at the base of the canvas. The artist’s signature and date are at the bottom right of the right hand corner.

The painting of the Nativity is divided by two painted pillars to suggest a tryptich with the word PEACE written over the the capital of the left pillar and the word GOODWILL over the right pillar. Each pillar is decorated with a blue vertical stripe, divided at regular intervals by diamond shapes containing alternate lozenges and quatrefoil motifs. A gold star in a blue lozenge at the top radiates throughout the picture.

In the central panel Mary’s head is covered by a full length pale blue cloak lined in gold. She kneels before the child who lies in a bed of straw. An elderly Joseph stands behind Mary, staff in right hand and left held protectively behind her head. A blue winged angel with short brown hair kneels over the Child.

In the left panel two shepherds holding crooks gaze upwards  towards the star, one is bearded and wears a red hat and sandals laced at the ankles. He has a fleece thrown over his back and shoulders. Only the bearded head of the other shepherd is visible. A flock of sheep graze in the background and extend into the central panel.

In the right panel two wise men face the manger. The figure on the left is dark skinned, clean shaven and wears a turban and a cloak over a robe and carries a gold casket. Behind him the bearded head of the second man is visible at the edge of the painting. Behind the figures is a blue star-studded sky, striped with rays. An angel rests on a bank of clouds, flanked on each side by three others all looking towards the manger. The third angel from the right carries a young child: John the Baptist perhaps? Or maybe the artist’s little daughter who died early in 1913?