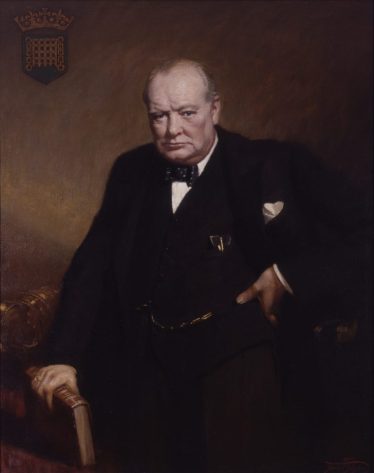 This was specifically concerned with the relationship between Salisbury and ‘Family Churchill’. Salisbury painted eleven images of Churchill, more than any other artist, though Churchill only sat for him on six occasions and never longer than one hour.

Over fifty artists have painted portraits of Churchill including John Lavery, John Singer Sargent, William Orpen and Graham Sutherland but none can match Salisbury’s six standalone portraits. Salisbury also featured Churchill in five large canvases of ceremonial events. No other artist of his time had either the studio capacity or innovative ability to consistently tackle such vast projects with Terence Cuneo, James Guthrie and AR Thomson only producing one each.

Whereas Churchill and Salisbury had much in common their relationship was tense. Salisbury was on top of his game, in particular with his popularity with the Royal House of Windsor, when Churchill was in the political wilderness. Salisbury was consistently the centre of attention at the unveilings of his large canvases perhaps to the chagrin of the Churchills. Certainly, Clementine Churchill gave him short shrift as she considered that he had painted her husband without permission and was a disturbing intruder into life at Chartwell, particularly during the War years. She would never sit for him and only for Reginald Lewis, his Assistant. Other members of Family Churchill had no such problems with both Mrs Duncan Sandys (née Diana Churchill) and Mrs Vic Oliver (née Sarah Churchill) sitting for him. He painted a child portrait of Julian, the Sandys’ son, and Duncan Sandys commissioned other paintings by him.

The two most iconic painted images of Churchill during the War, “The Siren Suit” and “Blood, Sweat and Tears” were by Salisbury in 1942 and these would inspire other artists. Also in 1942 he painted “Winston Churchill in the Robes of Chancellor of Bristol University” apparently without permission of ‘Family Churchill’. In 1949 he painted “Winston Churchill as Honorary Colonel, 4th Queen’s Own Hussars” and Nigel showed us the only known photograph of this. The Jockey Club requested a portrait in 1954 given that Churchill was its most illustrious member. Salisbury’s dreams came true in 1956 when Churchill sat for him at Sarum Chase, his Hampstead studio, for a personal portrait.

Nigel also showed us the vibrantly coloured vast canvases of events of pageantry in which Salisbury excelled and at which Churchill was an attendee. These were “The Jubilee Thanksgiving Service” of 1935, “The Signing of the Anglo-Soviet Treaty” of 1942, “Winston Churchill is granted the Freedom of the City of London” in 1943, “The Dedication of the American Roll of Honour” in 1951 and “King George VI opening the Festival of Britain” also in 1951. 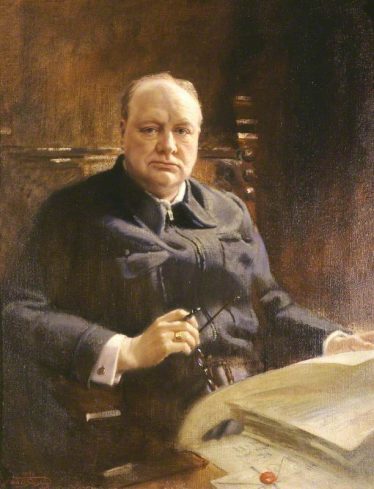 Though Clementine Churchill did her utmost to ensure that Salisbury never got past the reception room at Chartwell, the great irony is that when we enter that same reception room now, we are ‘welcomed’ by Frank Salisbury’s “Siren Suit” portrait of Churchill!