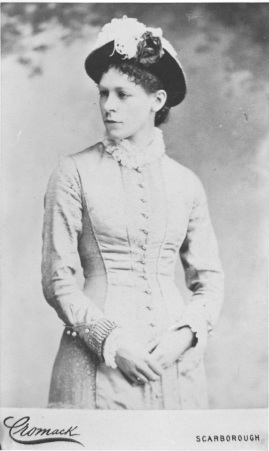 Portrait of Kate as a young woman

Kate Shacklock Richardson, daughter of an ex-Yorkshire farmer lived with her parents William and Ellen at “Park View”, Milton Road, Harpenden. The house had been built “as a speculation” next to his own home “Oaklands” by the Luton entrepreneur and Harpenden Waterworks founder, John Robert Brown.

Kate’s sisters Ellen, Annie and Alexandra all married – Ellen lived in Luton, Annie lived in Leeds with her tailor husband Harry Legg, and Alexandra married the boy next door, Henry C. Brown of “Oaklands”. It was to support Ellen in her unhappy marriage that the family had decided to move from Yorkshire to Harpenden. 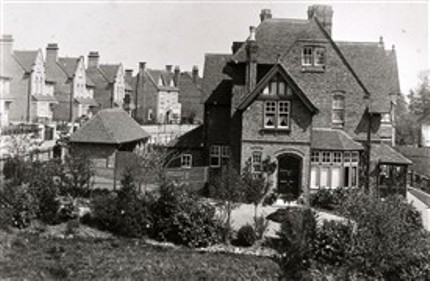 Park View House, on west side (even numbers) of Milton Road, with row of detached houses on the east – DS-B 3.98

Around this time – 1890’s – Milton Road consisted of large Victorian houses with extensive gardens, and in the case of “Park View” the vista to the west stretched across the Common to Rothamsted, and the garden extended to the railway station. Kate, an accomplished water colourist, portrayed evocative scenes of the station, including the old buildings, gas lamps, porters with barrows and passengers with magnificent hats. 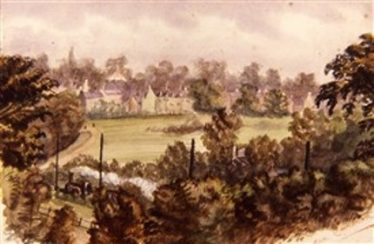 View from Park View House in Milton Road across the common – 1890’s. 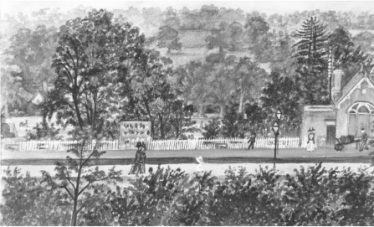 Her sketches also captured the innocent pastimes of children – sailing toy boats on the pond in Harpenden Common, or fishing in the River Lea from Pickford Bridge at Batford, with the Great Northern engine shed visible in the background or fishing from the footbridge over the ford at the bottom of Crabtree Lane, and including the Marquis of Granby. On comparison of Kate’s two sketches of children on the bridges with published photographs of the same locations at that time (2,3) the detail and charm of the former is evident. 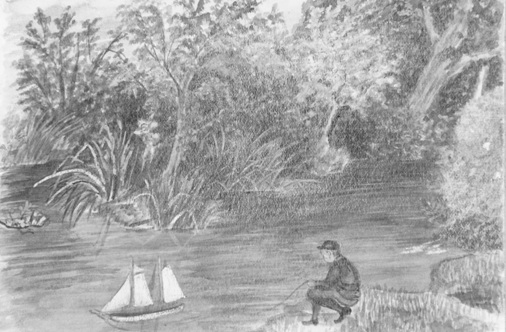 At the pond, Harpenden Common 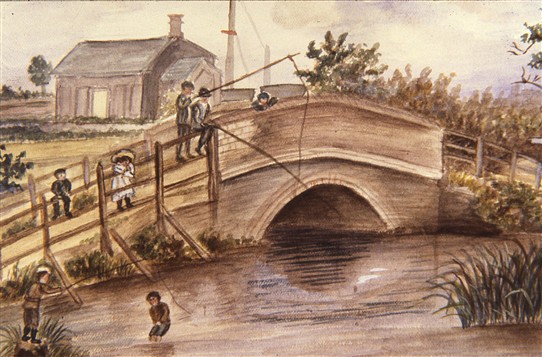 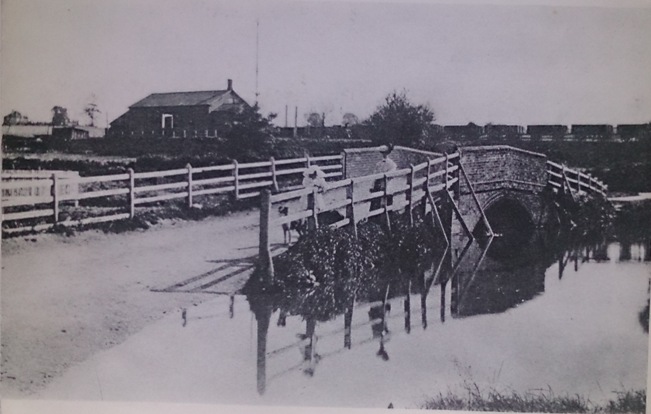 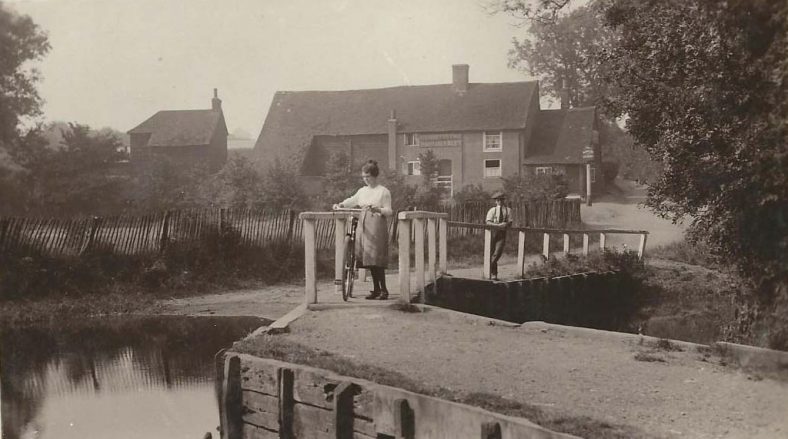 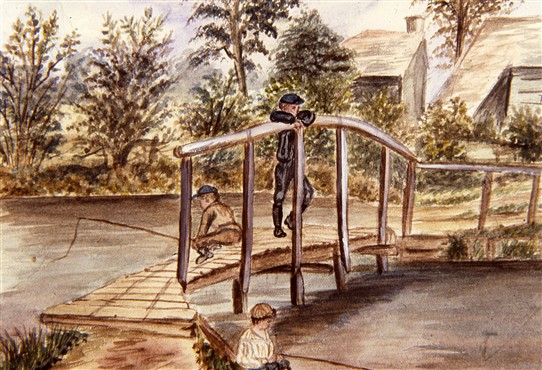 Whenever Kate wrote to her friends and relatives she would typically illustrate her letters with thumbnail sketches in the margins, and when the family met up in Scarborough for holidays she would take her sketchbook along and create whimsical drawings of them at the seaside. One holiday scene shows Henry Brown nonchalantly walking on the beach, dressed in blazer and white trousers and carrying a walking stick. Sitting on the rocks nearby is Kate’s sister Annie with her husband Harry, who has a curly moustache. Behind the couple, wearing a top hat and reading a newspaper is the bearded Mr William Richardson.  All of them are dressed in “holiday attire”. 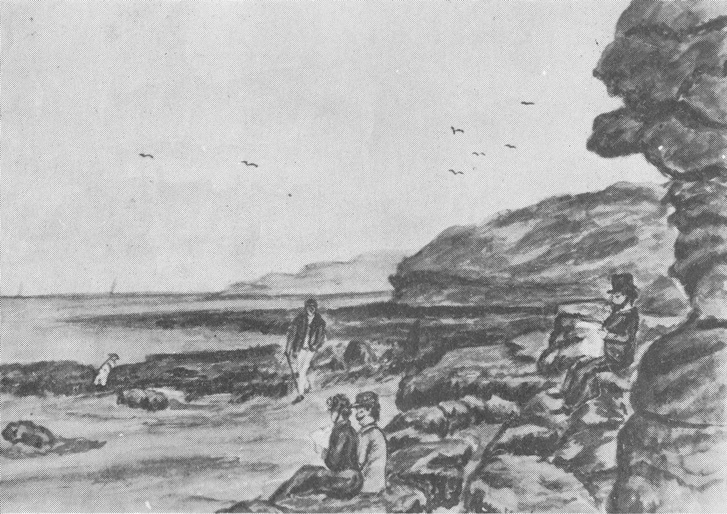 At the seaside, Scarborough 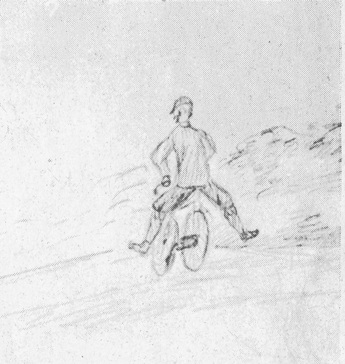 One amusing sketch shows Harry Legg freewheeling on a bicycle. A further drawing shows a typical seaside scene – complete with donkey – of children investigating a rock pool and with sailing boats in the background. Whilst the sketches depict her family relaxed and carefree, Kate also manages to evoke a sense of nostalgia in the observer. 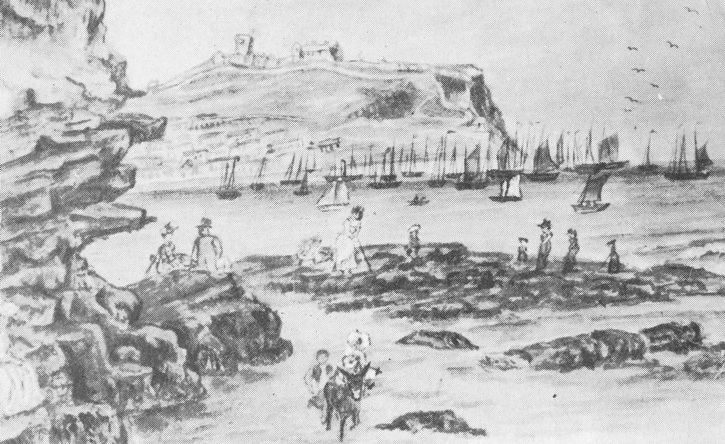 Genre artist Kate remained single and looked after her parents (father d.1917), and later, also the children of her deceased sisters Ellen and Alexandra. One such niece was Alexandra’s daughter Ivy – later to become Mrs Hobbs, daughter-in-law of Luton temperance stalwart Thomas G. Hobbs, and the mother of Jean Davis, a local historian and author from Aldbury, Tring.

Kate died in January 1941 aged 80, and is buried in St Nicholas’ churchyard, Harpenden in a family plot with her parents and sisters Ellen and Alexandra. Mrs Ivy Hobbs, who died in 1981, was Harpenden’s last link with Kate Richardson.

Material for this article was derived  from Hertfordshire Countryside article “From a Hertfordshire sketchbook of 1898” by Jean Davis (where the family members in the Scarborough holiday sketches were identified)  and from a transcript made in February 1982 by LHS member Pat Wilson, who interviewed Ivy Hobbs about her “Aunt Kate”. Mrs Hobbs also lent the LHS Kate’s sketchbooks and watercolours, for copying (in black and white)