You are here: HomenextHarpenden HistorynextPeoplenextOld Harpenden families and benefactorsnextThe Wilson family : I rang a doorbell in Colchester and a door opened in Harpenden.

The Wilson family : I rang a doorbell in Colchester and a door opened in Harpenden.

Connected by Theodora Wilson. The serendipity of family history 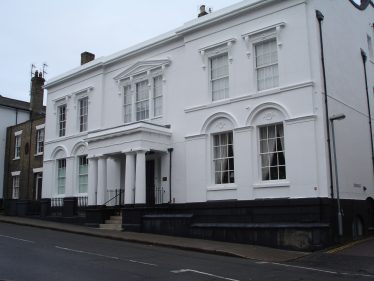 The ‘wrong’ No. 8 The Rev. John Savill and his wife Frances had this splendid Georgian house built in 1817. The house is known as Belgrave Place. It is not known if that was the original name or if it has been re-named since it was divided into flats. The original front door that faces onto East Hill displays a large No. 8 as it is now flat 8.

It all began when I was asked to join the Colchester Civic Society in September 2013, my first job was to research one of Colchester’s famous artists (Frank Daniell), as they wanted to erect a blue plaque at his former home. As it turned out, I found two places where he had lived. One morning I decided to seek out the owners of 8 East Hill, one of the houses where the artist had lived. Some of the numbering on East Hill can be rather confusing, as there were two houses with a number 8 on the door. When I rang the doorbell of what turned out to be the ‘wrong’ No. 8, I had no idea what an incredibly journey I would embark upon and how it would lead me to Harpenden and Theodora Wilson’s Journals.

I discovered from the owner, of the ‘wrong’ No. 8, that I had arrived at the former home of the Rev. John Savill. The name seemed familiar and when I returned home I delved into family records and soon realised that the Savills had been my 4 x gt uncle and aunt and I had arrived almost 200 years after they had built their splendid house.

The Rev. Savill was a Nonconformist, he had been appointed minister to the Lion Walk Church in Colchester. His wife Frances (nee Maitland) was the sister of my 3 x gt grandmother, Mary Wilson nee Maitland. Mary had married Joseph Wilson the brother of Thomas, who was Theodora’s gt grandfather.

Having found this information I could hardly contain myself and I contacted a friend and an author, Malcolm Harrison. He had written a book about the Wilson family. Another surprise for me… he revealed that there was a close family connection with Ann and Jane Taylor of “Twinkle Twinkle Little Star” fame! I now became very interested in these incredible coincidences.

The Taylors had lived in West Stockwell Street, Colchester and they obviously knew the Rev. Savill. Ann Taylor mentions him in her writings as; ‘Our valued friend, the Rev. John Savill…’.

I then started to search the Internet for the name combination of Wilson and Taylor. It was not long before my research lead me to Harpenden and the book ‘Theodora’s Journals’. I realised that her family was obviously the same Wilson family that Malcolm mentioned in his book; listing Thomas and Jessie Wilson nee Taylor (the niece of Jane and Ann Taylor Colchester) and their children, but not Theodora or her mother.

As my son lives in Harpenden, I asked him if he would buy the book for my Christmas present. While I eagerly waited for Christmas, I searched on the Internet for Theodora’s mother and found that Theodora’s father Thomas, had married Ann Brooke on the 4th April 1866 at Prestbury, Cheshire. They were married by Ann’s uncle the Rev. James Sumner. The rector of Prestbury Church, the Rev. Stephen Lea-Wilson, was a relative of Thomas.  Stephen was the youngest son of Stephen and Sarah Wilson (nee Lea).

I also found that when Theodora’s mother Ann died at the age of 31, in San Remo, Italy, the Liverpool Mercury death notice gave the address of Thomas Wilson as 101 Adelaide Road, London.

By the time Theodora’s family were living in Harpenden, there were already several Wilson branches in existence. The first Wilsons who moved to London in the mid 1700s were actively engaged in the silk industry. Over the years many of the family had made vast fortunes and this wealth filtered down the family lines.

Christmas came and I opened my copy of ‘Theodora’s Journals’. I was fascinated to read about her life, family and travels. The Wilson family tree is almost exactly as we have it, except that it does not mention my 3 x gt grandfather Joseph Wilson’s first marriage to Mary Maitland. Like most of the family, Joseph and Mary were both Dissenters. His second marriage to Emma Welford is mentioned, but there was no issue.

Joseph and Mary Wilson had three children – Mary, Frances and Henry who all lived to adulthood. Mary married the Rev. Henry Grace Sperling. Frances was my great-great grandmother, she married the Rev. Charles David Brereton. Henry Wilson married twice. First to Mary Fuller Maitland (had issue). His second marriage was to Caroline Fitzroy (had issue). 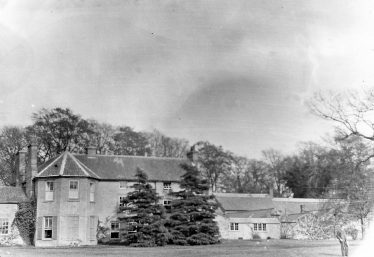 With his wealth, Joseph Wilson purchased the estates of Little Massingham in Norfolk and installed his son-in-law Charles as Rector. Charles and Frances lived in the vast rectory at Little Massingham. Charles was the first of a line of Brereton rectors of that parish and I have often wondered if it was because of Charles being a ‘low church’ clergyman and Frances, having been brought up as a Congregationalist, if that is why that church has remained ‘low church’ to this day. 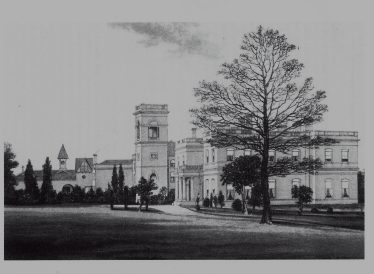 On page 69, Theodora mentions a family visit to London where they met her aunt May. They visited Highbury and saw where her father and aunt were born and also went to Highbury College, built by her great grandfather. They later viewed ‘Highbury Hill’, where Joseph Wilson had lived. Later on page 177 there is a mention of a visit to distant cousins at Stowlangtoft. ‘The Stowlangtoft Wilsons were descended from “Uncle Joseph”, younger brother of the second Thomas Wilson of Highbury’.

Many of the Wilson family held high office in the Weavers Company. Coming from Nonconformist backgrounds, some were actively engaged in building or donating money to build chapels, or held office within organisations which promoted Christianity. They also supported others in philanthropic ways.

Theodora’s grandfather Joshua wrote a book: ‘A Memoir of theLife and Character of Thomas Wilson, Esq., Treasurer of Highbury College’. To me this was immensely interesting reading because he also gives a brief description of his grandfather and grandmother, Thomas and Mary Wilson (nee Remington), Theodora’s great-great grandparents and my 4 x gt grandparents.

The Wilsons are a fascinating family and discovering even more about them on this journey has been wonderful. Thank you Editors, Amy and Ruth, not forgetting the writer herself, Theodora!

There were many other notable Wilson descendants;

to name just a few.