Three generations, and no direct descendents Extracts from Eric Brandreth’s 2003 article on Harpenden Lodge, first published in newsletter 113, June 2011 shortly after his untimely death, with additional material from obituaries in our archives.

The Lydekkers were a Dutch family who emigrated to America in 1654. They soon owned land in Long Island, now part of New York State, but lost it in the American War of Independence so in 1783 came to England where they first took a house in London. Gerard Wolfe Lydekker, who bought Harpenden Lodge in 1857, was born in Rochester in 1811. He went to Trinity College, Cambridge and graduated MA in 1836. He was called to the Bar in 1841, joined the Home Circuit, and practised at the Hertford and St. Albans Sessions.  He was appointed a Justice of the Peace for Hertfordshire and Bedfordshire and was for a time Chairman of the Quarter Sessions for West Hertfordshire.

He married Margaret Martha Peake in 1848 and they lived in Tavistock Square, London. He bought Harpenden Lodge from the Hadden family in 1857 and came, at the age of 46, to live in Harpenden with a wife seven years younger and three young sons; Richard 8, John 7 and Arthur 4. Edgar, the fourth son was the first to be born (1863) in Harpenden.

The three younger boys grew up, married, and left home. Richard, the eldest, graduated in 1871 and in 1874 went to India working for the Geological Survey of India. His father died in 1881 a couple of months before the census. Present in the Lodge on census night were Martha, her sons John, a Barrister-at-law, (30 and not married at this time), and Edgar, 17, described as a private pupil, two visitors, Henry Oakley, 17, also a private pupil, a friend of Edgar’s, and Mary Bedford, 25, described as of private means. There was a staff of 6: a footman, a lady’s maid, a cook, a housemaid, a kitchen maid and a coachman. Richard was in India at the time of his father’s death.  He returned home to the Lodge in 1882 and took up his position as head of the family. Shortly afterwards he married Lucy Davys, the elder daughter of the Rector of Wheathampstead. They had five children, Helen, born in 1883, Beatrice in 1884, Hilda in 1886, Gerard in 1887 and Cyril in 1889. His mother (Martha) died in 1897. 1915 was a bad year for the family. Lucy and Richard died within a few months of each other and later in the year Cyril, serving with the Bedfordshire Regiment, was killed in action at Gallipoli. 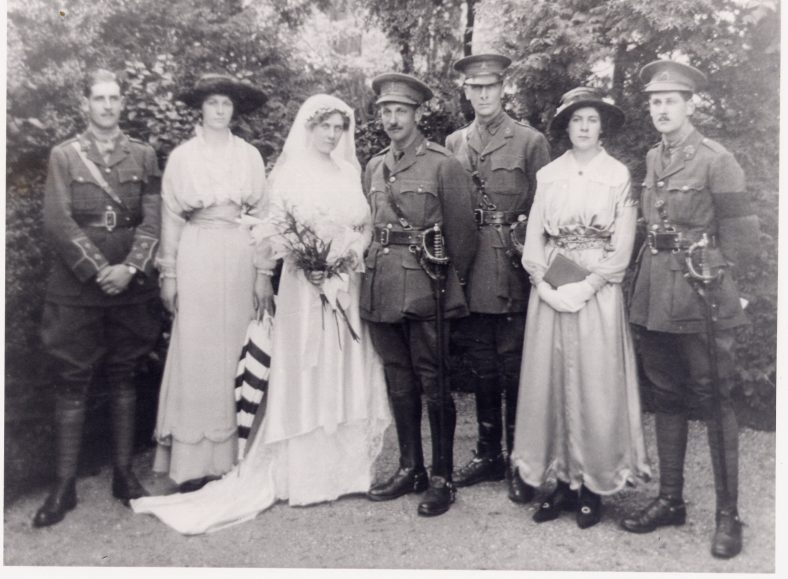 Richard’s family after the wedding of Beatrice and Ernest Clutterbuck in 1915. On the left Cyril and Helen; on the right Hilda and Gerard. The Best Man, Robert Evans, is standing behind Ernest Clutterbuck. Cyril and Gerard, who are wearing black arm bands in memory of their parents who had died earlier in the year, both died in the First World War.

Beatrice’s wedding to Lt. Ernest Clutterbuck took place quietly in the same year, reducing the family still living in the Lodge to the two sisters Helen and Hilda. Gerard was also serving with the Bedfordshire Regiment: he died in Alexandria in 1917.

After their brothers’ deaths the two sisters preserved the home almost as a shrine to them and the Lodge was not altered in any way. 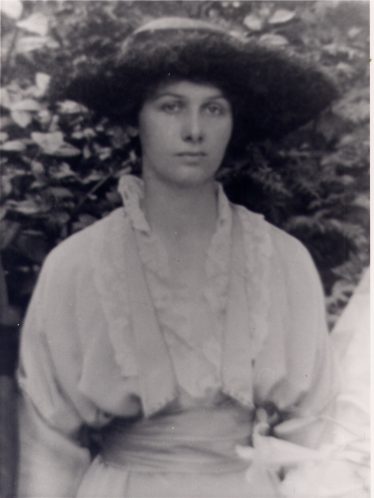 The sisters lived together with an ever reducing staff until Helen died in 1956. Hilda remained alone until 1979 when she went into a nursing home. She died on 2 February 1987, just six weeks short of her 101st birthday.

The Herts Advertiser obituary of Helen Margaret Lydekker (9 March 1956) described her ‘life-long association with Harpenden parish church’ – on the parochial council, at the St Albans Ruri-Deaconal Conference, as a school manager of St Nicholas CofE School and as a Sunday School teacher.  Her other public works included fundraising for the Harpenden Memorial Nursing Home (40 Luton Road) and West Herts Hospital Local Committee.  She was the first local organiser for the Queen Alexandra’s Rose Day appeal.  She was a keen supporter of the Conservative Party and was an honorary vice-president of the Hemel Hempstead Divisional Association in the 1950s.  From it’s beginnings in the First World War until her death she was a member of Harpenden War Relief Committee, and between the two world wars she was actively connected with the work of the Harpenden branch of the League of Nations Union. 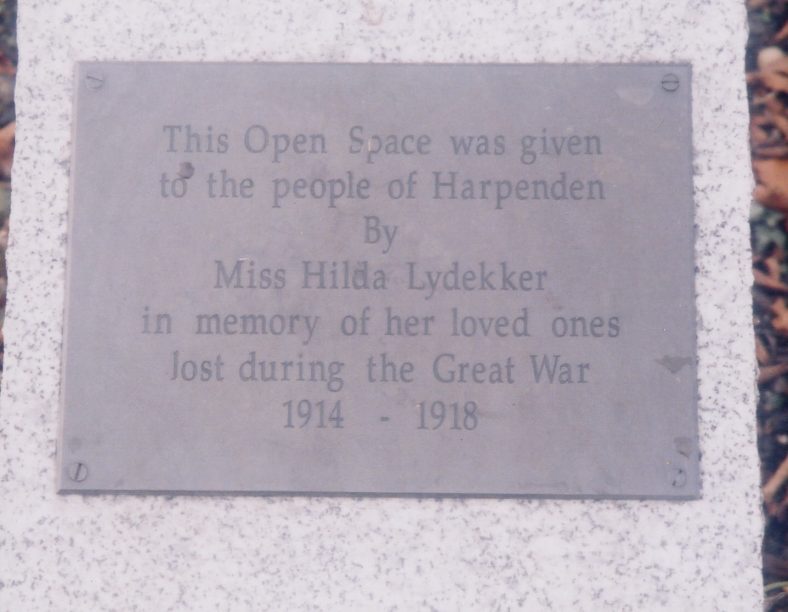