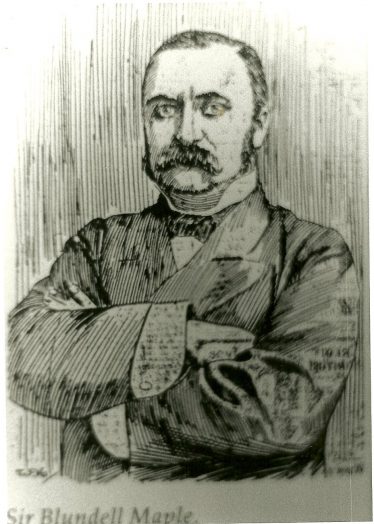 This short biography by Audrey Deacon was first published as part of an article on Akrill House in Newsletter 92 p 18, September 2003.  His name lives on in the Maple flats, but not in the convalescent home he built – now Akrill House.

John Blundell Maple was born on 1 March 1845 at 145 Tottenham Court Road, London, the elder son of John and Emily Maple.  John Maple had founded in 1840, under the name of Maple and Cook, a furnishing and drapery business, which developed into the present firm of Maple [which finally went bankrupt in 1997, ed – but see correction in the Comment below]. His elder son joined him in 1862 after being educated at Crawford and King’s College School, and from 1880 was practically in charge, though John Maple continued to take part in the business until 1900, a short time before his death in 1903. When, in 1891, it was converted into a limited company, with £2 million capital, John Blundell Maple became its chairman.

In 1887 he was elected to Parliament for the Dulwich Division, which he represented until his death; he was also a member of the London County Council, was knighted in 1892 and became a baronet at the Queen’s Diamond Jubilee in 1897.  In that year he undertook responsibility for re-building University College Hospital, which adjoined his business premises, and made provision for the work to be completed after his death.

During his lifetime he made many other substantial charitable gifts, including Clarence Park, St Albans and the “Sisters” Hospital. [Founded in 1893 as an isolation hospital in Folly Mead, St Albans, it moved to Folly Lane and became part of St Albans Hospital, until redevelopment as Harriet Heights, Goldsmith Way in the mid 2000s.  It was named after two daughters, Winifred and Dorothy who had both died of scarlet fever.  It is architecturally similar to Akrill House. ed].

He took up horse-racing and breeding, with a large stud [on his estate ed.] at Childwickbury, near St Albans. On 24 November 1903 Sir Blundell Maple died at Childwickbury and was buried there.  His estate was valued for probate at £2,153,000.  In 1874 he had married Emily Harriet Merryweather of Clapham; there was one surviving daughter, Grace, who inherited his fortune.