The Haddens of Harpenden Lodge 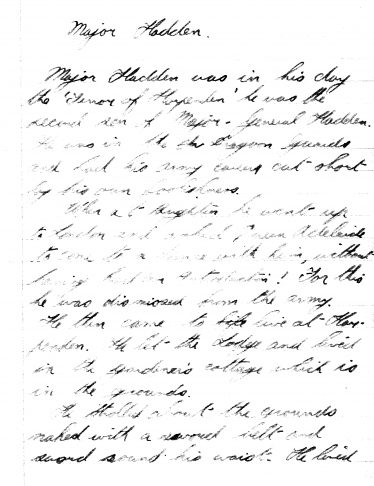 Sir Charles Morgan Bt sold the house, which still exists, to Major-General James Murray Hadden RA in 1804 and it is now known as Harpenden Lodge.

Born in 1750, James Murray Hadden was trained at the Royal Military Academy, Woolwich and given a commission in the Royal Artillery in 1771. In 1776 he was in Canada commanding a gunboat at Quebec. He fought against the Americans in the War of Independence, was wounded and captured at Saratoga but was then returned in an exchange of prisoners. In 1797 he was Adjutant-General of the British forces in Portugal.

In 1804 he was appointed Surveyor-General of the Ordnance. Having passed through all the ranks he was appointed Major-General in 1811. He died on 29 October 1817 aged 67 and was buried in the nave of the parish church of St. Nicholas.

James does not appear to have spent much time himself at Harpenden Lodge but his family lived there until 1857. His wife, Harriet Farrer, died on 11 April 1840. They had two children, William Frederick born in 1789 and James, date of birth unknown. William died on 1 June in 1821 and James on 12 February 1846.

William earned quite a reputation for himself. He was a Captain in the 6th Regiment of the Enniskillen Dragoon Guards and had his Army career cut short by his own foolishness. This story was told to Colonel John Busby, a noted Harpenden historian, by Captain Arthur Lydekker whose father bought Harpenden Lodge on 30 January 1857 from a grandson of Major-General James Murray Hadden.

“Captain Hadden was stationed at Brighton. One day he went up to London and asked Queen Adelaide to come to a dance with him without having had an introduction! For this he was dismissed from the Army.

“He then came to live in Harpenden. He let the Lodge and lived in the gardener’s cottage, which is in the grounds. He strolled about the grounds naked with a sword belt around his waist. He lived by himself. One day he sent for a Mr. Gardiner, who was a jobbing gardener, made him enter the cottage and sit down. Hadden then told him that if he moved he would shoot him with a gun he was holding.

“Another day he went to stay with the Dean of Liverpool (Dr. Bourne) who was a friend of his. While there he came down one morning and said to his host ‘I am very sorry but I have had a visitation during the night and I must shoot you.’ ‘Oh dear,’ replied his host , ‘however I expect you must do it but let us have a few prayers first’. ‘Certainly,’ Hadden replied, ‘most excellent idea’. ‘Let us pray for the King’, said the Dean.  ‘Yes’ was the reply. ‘Let us pray for the Duke of Wellington’ he added. By this time the Dean’s butler had come in, realised the situation, and apprehended Hadden. Hadden ended his days a raving madman in a lunatic asylum.”

The house was sold to Gerard Wolfe Lydekker in 1857, by a grandson of Major-General James Murray Hadden.

Ed.  We have not been able to verify the source of these anecdotes