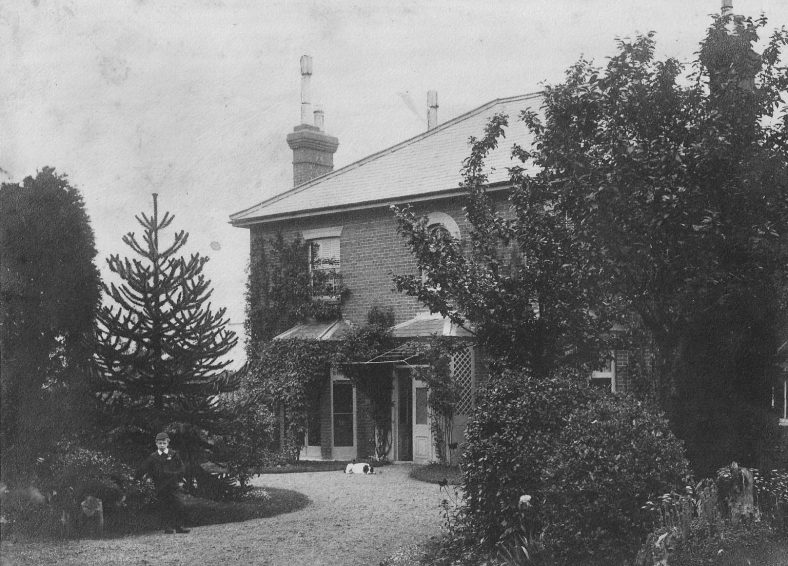 In 2007 a Ralph Elmes living in Bere Alston, Devon, sent a large file of family photographs to Les Casey, the curator of Harpenden History Society’s collection, because they were relevant to some of his family who had lived in Coleswood, a Victorian house on the edge of Harpenden’s East Common. Les Casey was able to compile a family tree from them and other information. It shows that the Elmes family resided in Harpenden for over a hundred years from about 1840 to the mid-20th century. 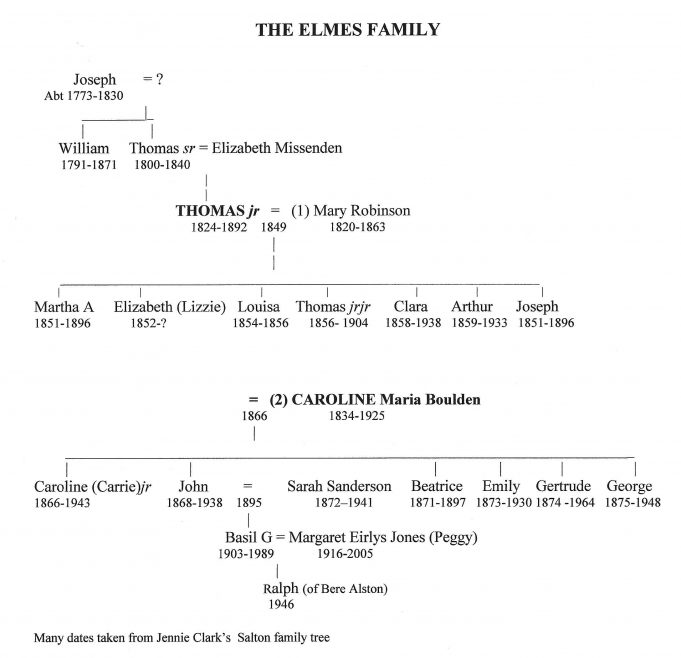 At the top of the tree is Joseph Elmes, of Hertford who was born about 1773. His son Thomas married Elizabeth Missenden and they named their son, born in 1824, Thomas.

The first record we have is a copy of the of the apprenticeship of young Thomas dated 1840. It is between his mother Elizabeth Elmes of Harpenden, who was a widow by then and Francis Sear, a grocer and chandler of Hertford. His apprenticeship was for six years which was quite normal for the time. 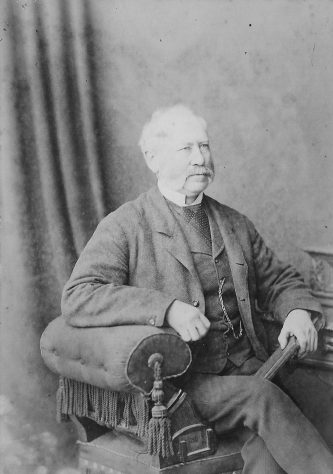 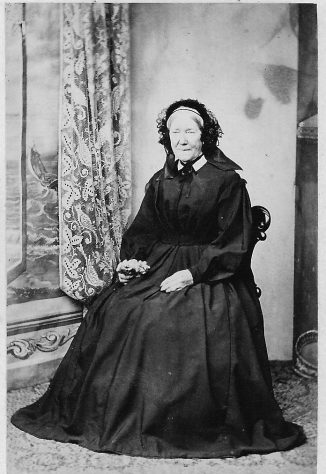 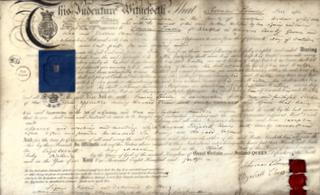 He/Thomas married Mary Robinson in 1849. The first three of their seven children were baptised in the Marylebone area. Mary died in 1863 and in 1866 Thomas married Caroline Boulden who bore him six children. 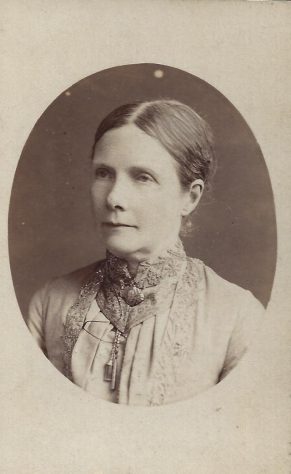 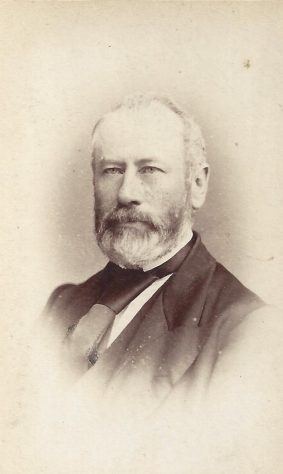 The 1871 census records them as living in Marylebone but by 1881 they are shown as living at Coleswood. Thomas had thirteen children by his two wives and settled in Coleswood with the younger ones. It’s from this second family that the Harpenden Elmes were descended.

There are a series of studio photographs of the Elmes girls taken in Marylebone and later in Harpenden and Luton by professional photographers (see below). They show the enormous amount of floor length clothing they wore in those days with masses of embroidery, lace, frills and petticoats all enhancing tightly corseted figures. And their hats range from Victorian lace caps to huge cartwheels decorated with fruit and flowers popular at the turn of the twentieth century. Most of the Elmes girls of Coleswood gradually left Harpenden as they married. Their wedding photographs show groups of about sixty people all dressed in their best carrying enough flowers to stock Covent Garden. 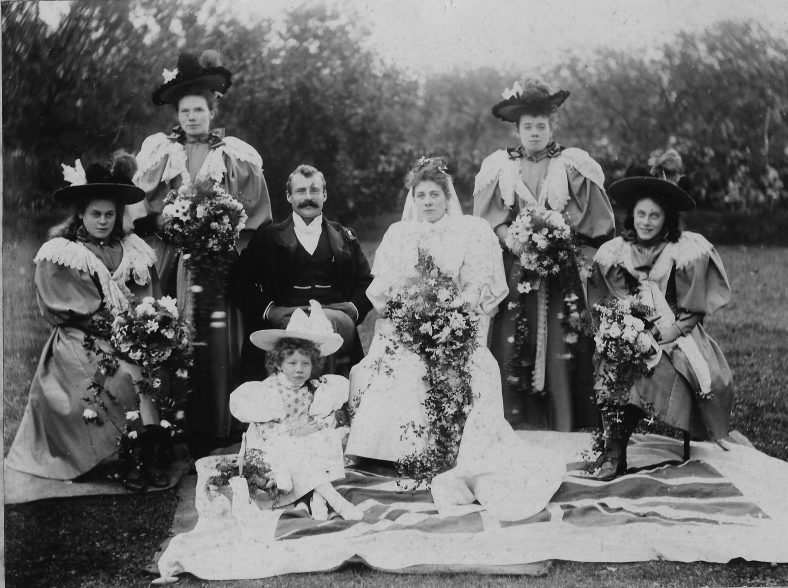 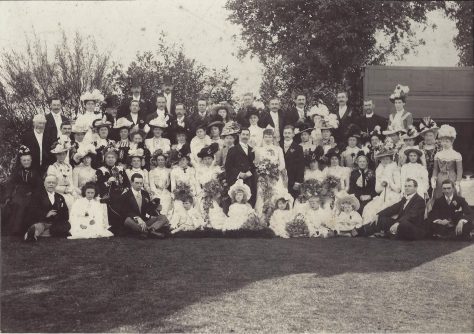 Emily’s wedding to Ernest Lonsdale 1900. See comment below for a description of the wedding.

As they come forward in time the clothes get less cumbersome, the dresses are shorter and the children are in short dresses with long white socks.

The five Elmes young men who lived at Coleswood are pictured in high buttoned jackets and stiff collars. Ralph Elmes who donated the photographs is the grandson of John Elmes the elder son of Thomas and Caroline.

John was born in 1868. Aged twenty seven and by then a master mariner he married Sarah Sanderson in Hartlepool where they settled and raised seven children. Their son Basil was the father of Ralph Elmes who sent the collection of family photographs relating to the Harpenden Elmes to Harpenden History Society. He had not known about the photographs while his father was alive as they were kept by an uncle in Yorkshire.

Caroline Elmes – at Colewood for 50 years

The person who links the Harpenden Elmes together is  Caroline Elmes nee Boulden, Thomas Elmes’ second wife. She lived at Coleswood for over fifty years before dying in 1925 aged 90. 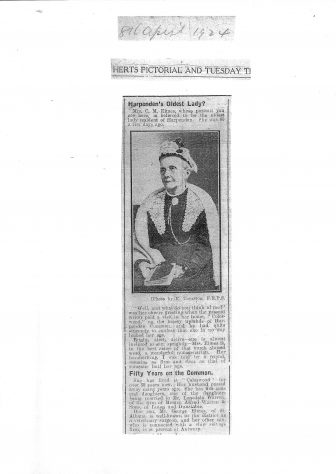 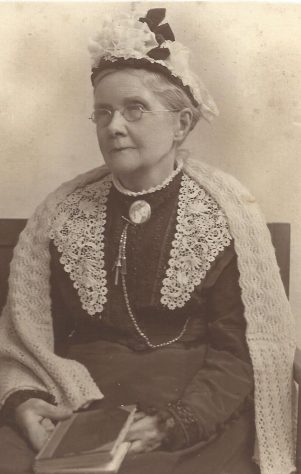 Caroline as an old lady; the picture used for the newspaper article

A cutting from the Herts Pictorial and Tuesday Times dated April 1924 features her as Harpenden’s oldest woman. 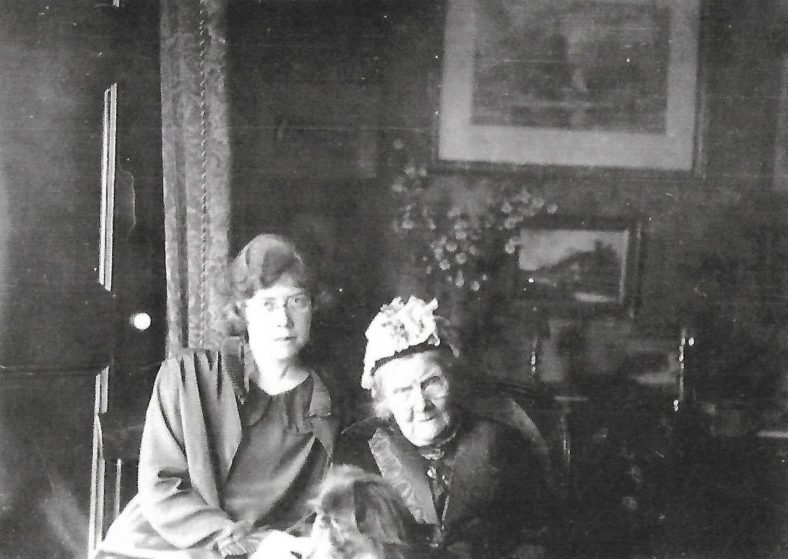 Caroline Elmes and grandaughter Madeline ClarkHer elder son John worked in shipping salvage and her other son George was well known as a veterinary surgeon in St.Albans. Of her four daughters the eldest, Caroline (Carrie) born in 1866, married John Bunyan Brooks and bore a daughter Kathleen. The second daughter Beatrice married Maurice Clark a naval officer. They had a daughter Madeline in 1896. Beatrice died in 1897. Maurice then ‘married’ her sister Gertrude. It was not legal to marry a dead spouse’s sibling but many such ‘marriages’ took place because there were so many motherless children to be cared for. The fourth sister Emily married Ernest Lonsdale Warren who was in the straw hat trade and appears from Kelly’s Directory to have lived in Tennyson Road and according to the probate notice  she died there (in a house named ‘Kenmore’) in May 1930. 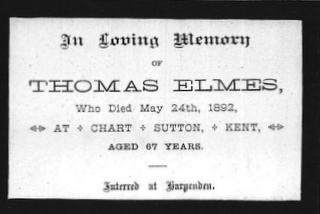 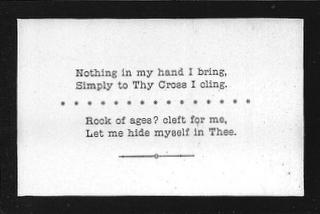 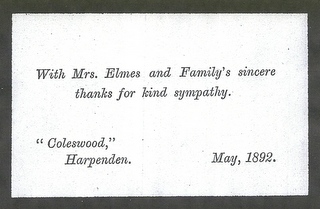 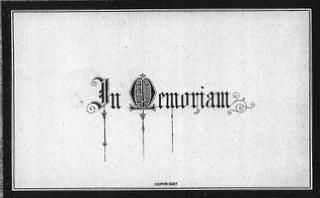 On the mourning cards sent out by Caroline Elmes and family when her husband Thomas died in 1892 their address is given simply as Coleswood.  It is not known when it gained the suffix of House. Caroline died in 1925 and was buried in St.Nicholas Churchyard. An old gravestone commemorates Beatrice Clarke (nee Elmes) who died in 1897 together with her half sister Martha, the eldest daughter of Thomas Elmes, who died in 1896. 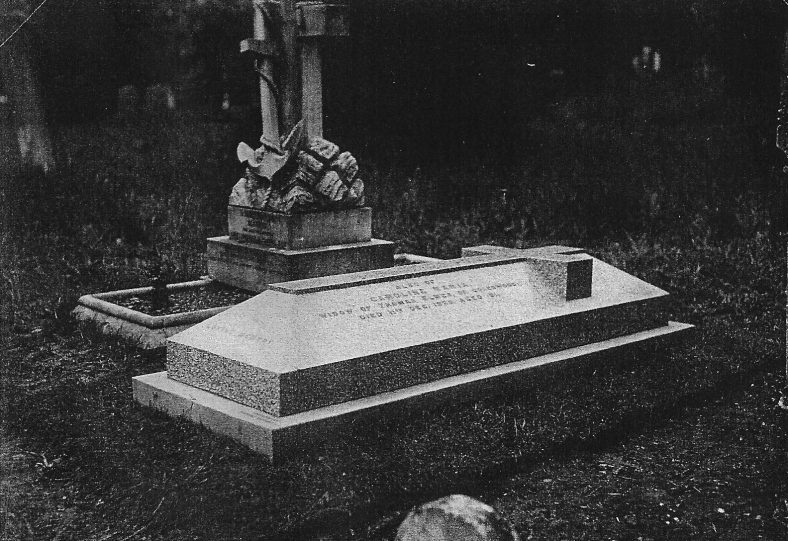 The two Elmes’ graves. The front one is the ‘modern’ gravestone the one behind the ‘old’ stone, see script

Next to it a modern polished gravestone commemorates four of the family. But whether they are actually buried under it and when it was put there is not known. The earliest date is of the death of Elizabeth Elmes in 1873, widow of Thomas Elmes of Hertford. Her son Thomas died 1892 and his wife Caroline who died in 1925 are also listed as is Clara Elmes, the fourth daughter of Thomas Elmes, who died unmarried in 1938 age 80.

Coleswood still stands in Little Lane off East Common. It was in the hands of Captain John Elmes in 1927, the year after his mother’s death, and appears to have been sold. It is in excellent hands at present as it is in very good order. 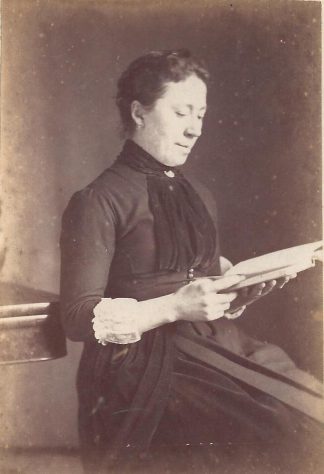 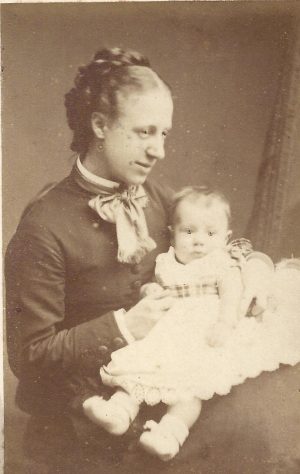 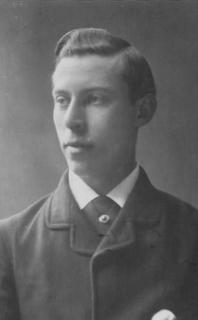 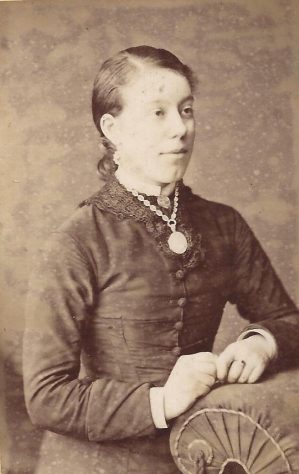 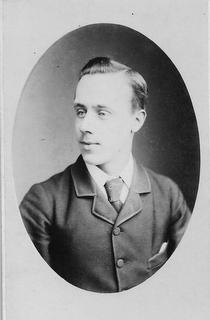 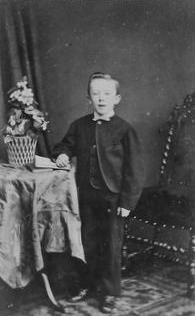 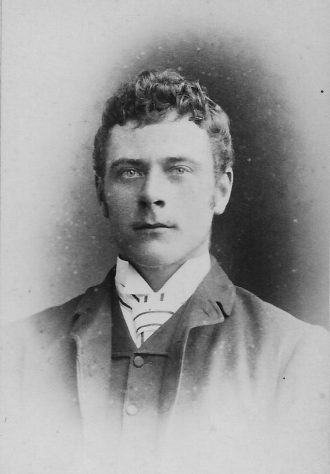 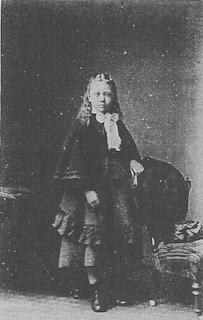 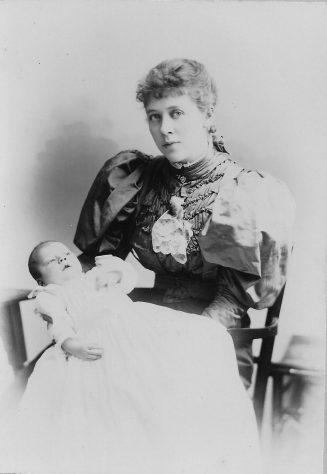 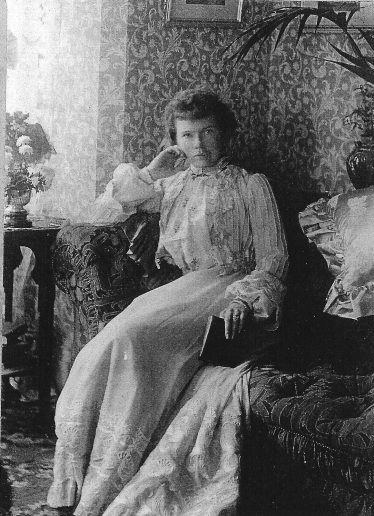 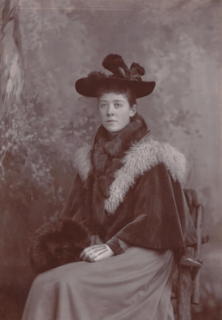