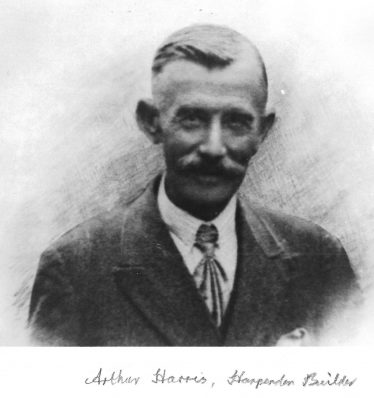 Frederick Arthur Harris was born in 1891, the elder son of Mr Arthur Harris, founder of Harris (Harpenden) Limited of 100 Luton Road, a building company associated with the re-building of St John’s Church, the Administration block and Children’s houses at the National Children’s Home, the Sanatorium (later Elmfield, now The King’s School), the NCH chapel at Highfield Oval, High Street Methodist Church and the Methodist School Hall at Kinsbourne Green. Frederick’s brother E W Harris was a partner in the business from 1919 until his early death in 1927. Frederick became a director of the company after his father’s death in 1932. 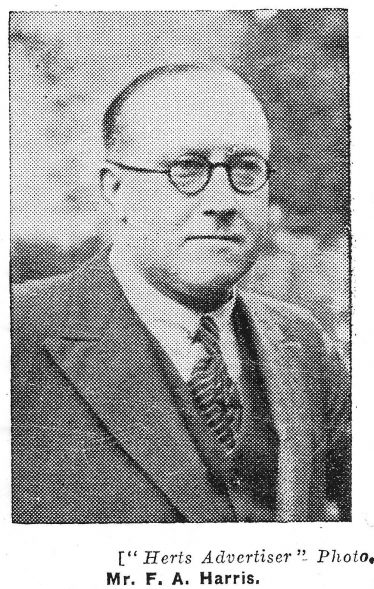 Frederick was educated at the Board School in Victoria Road and in St Albans. His handwriting was first-rate, as was the case with many of the older men who were at school under John Henshaw. The latter was almost on the point of retirement when Fred Harris went to the school where he was teaching, but the Henshaw traditions remained.

He started work as a junior clerk in a merchant’s office in St Albans, and in 1909 he was taken on by Charles Sprott Tuckey, the Harpenden Solicitor, where he began to show an aptitude for local government work. But soon after the outbreak of WWI he enlisted at Bedford and was drafted to a Divisional Transport Supply Section. He went to France in 1915 and was mentioned in despatches in 1917, while engaged at the Base Supplies’ Directorate. He was demobilised with the rank of Staff Sergeant.

Returning from war service, he returned to the Solicitor’s office, first in rooms over the Westminster Bank, and from 1928 in Vaughan Road, and became Mr Tuckey’s managing clerk. In April 1921 he was appointed part-time deputy clerk to Harpenden Urban District Council. He became whole-time Deputy Clerk in December 1932 when the Council acquired Harpenden Hall as their offices. Up to that time Mr Tuckey, as Clerk, had conducted the business of the Council from his own office. On Mr Tuckey’s retirement in April 1938, Frederick Harris succeeded to the full Clerkship.

Soon after this came the precautions and preparations for war and then the actual outbreak of WWII. Great responsibilities fell on Mr Harris, who had the duty of seeing that food distribution was arranged and rationing regulations implemented. He also had to supervise arrangements for the reception of evacuees from London, the organisation of the air raid wardens service, and had to be ready to inaugurate emergency schemes of great complexity in the event of invasion.

A man of few hobbies, Mr Harris took little part in the activities of Harpenden organisations except when his duties and position necessitated, but he was for many years a playing member of Harpenden Bowling Club.

Many tributes were paid to Mr Harris as a man who carried out his onerous duties with meticulous regard to detail, who was courteous in all his dealings with his fellow-men and who did so in such a quiet and unassuming manner that he was not well-known by the public he served so faithfully and for so long.