A long life of community work

David Hodgson, Ian’s nephew, spoke at the funeral service in St Nicholas church on 22 March. Photographs of Ian are from the family archives. 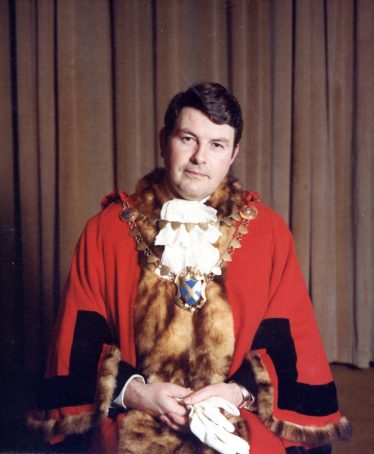 For many people here today, Ian was a prominent local figure who combined a career as a Psychotherapist with tireless work in the community. But he was many other things besides. Trilingual, he spoke French & German fluently. He was an Historian. He was a lawyer and even a soldier.

Throughout his life he worked tirelessly for others and I would like to spend a few minutes mentioning some of the ways in which he touched the lives of others, as well as briefly relate experiences, unknown to some, which demonstrate what a rich and full life he led.

I think that most people assume that Ian was born and bred here in Harpenden, but he was in fact born in London, moving here with his family at the age of 6 to escape the Blitz (living first in Rosebery Avenue). Here, save for a short stint in New York as a lawyer, he would spend the rest of his life. 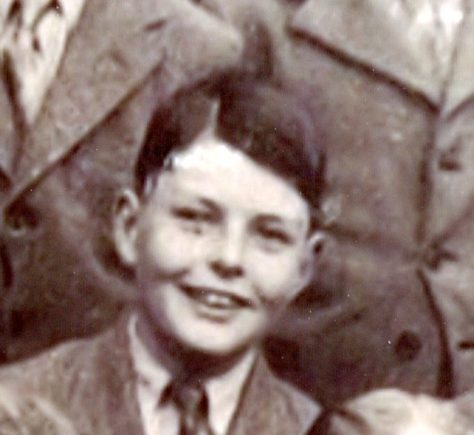 Ian in an extract of 1946 Moreton End School photo

He went to prep school (Moreton End School) just down the road and then from the age of 13 he went on to board at Westminster where, luckily for me, he met a certain Kenneth Hodgson who he would invite home for the odd weekend. These exeats, as they were called, were great fun except for the fact that Ian had a rather irritating little 7 year old sister by the name Jill, who would insist on tagging along and getting in the way. Irritating or not, 20 years later Kenneth and Jill would marry. So I owe my very existence to Ian.

After Westminster, Ian did two years’ National Service in the Army (*see below) before going up to Oxford to read PPE (Politics, Philosophy & Economics). He didn’t fancy the economic element and so switched to History in his second year, which as you all know is a subject about which Ian had an almost encyclopedic knowledge. 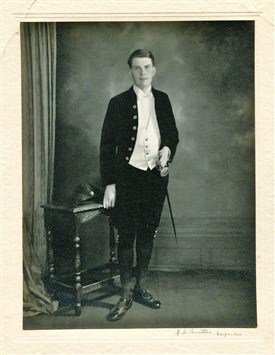 Ian in court dress – what was the occasion?

As their graduation approached, Ian & Robert thought about careers and initially decided to try for the Foreign Office. In those days, you had to take two written exams to get into the FCO. One was purely academic and essay based, and the other was more practical, involving psychometric tests or their equivalent. They passed the first exam with flying colours, coming top and second top respectively, but they came bottom and second bottom in the more practical paper.

A career in law

His dreams of being a diplomat dashed, Ian turned to the law and joined a firm of solicitors in The City which specialised in Entertainment and Oil & Gas. As far as the Entertainment side of things was concerned, he got to hob-nob with a whole range of stars including Maria Callas, Elizabeth Taylor (when he did some work on the Film ‘Cleopatra’) and he even worked with Barbara Windsor whose employment contract he helped draft and which included a clause stipulating the precise chest measurement below which she would be in breach (apparently her assets were insured for a million pounds as a consequence). In marked contrast, his Oil and Gas work meant that Ian was actually present in Tehran during the fall of the Shah when he had to be smuggled out lying prostrate in a van through the streets lined with bodies strung up on lamp posts so that he could get one of the last flights out of the country. 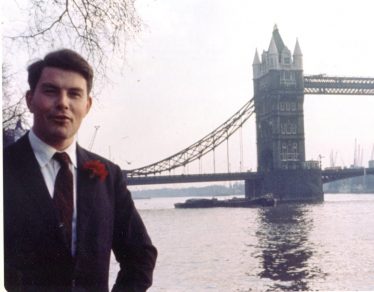 Ian enjoyed his career as a City Lawyer but prospects for advancement were limited, as the firm was family run and he would never make partner. Growing restless, he briefly entertained the idea of emigrating to Canada, but after much thought decided to leave London to join a local practice here in Harpenden (Taylor Walker, later Taylor Walton). Working a short walk from his house, this move would enable him to continue with the law by day but allow him the evenings and weekends to indulge in what would become a great passion – local affairs. 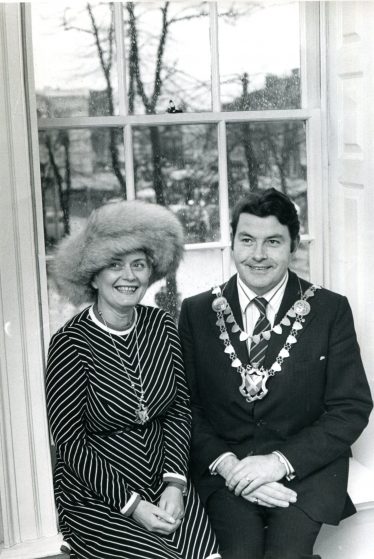 And indulge himself he did. Standing first as a local councillor (for Harpenden Urban District Council), he became the youngest mayor of St Albans while still in his thirties.

2. He supported Peter Hurford on the Committee of the International Organ Festival.

3. He was Chairman of the Harpenden & Wheathampstead Scouts as well as The Friends of Harpenden Memorial Hospital.

4. And he also worked very closely with the then Bishop of St Albans, Robert Runcie, and Dean Moore over the restoration of the Abbey and Chapter House back in the late 70s.

It was also as a lawyer that he would meet his wife, Pat, and through her gain an extended family: a much loved daughter, Tessa, as well as two grandchildren and ultimately three great grandchildren. Sadly, Pat died prematurely and though it was many years ago now Ian never really got over it. I am actually speaking from the lectern which Ian had made in her memory.

Family and working for others in the community would become the two most important things in Ian’s life and, though he enjoyed the law, following an attack of angina in his early Forties he decided to have a complete career change.

Now, given his background, Ian’s next move might seem a bit random but it was a decision which would surprise few who knew him well. Throughout his life, Ian had been heavily involved with supporting local youths. While still a student living with his parents in East Common, Ian would convert his father’s garden shed into a makeshift gym and spend hours with teenagers, mentoring them, supporting them and generally helping them turn their lives around when they got into trouble. Indeed, Ian has maintained contact with many of these people who have become lifelong friends, some of whom are here today.

Anyway, having amassed enough savings from his career as a lawyer, Ian felt he could afford to do what he really wanted to do and he decided to become a probation officer.

But, in order to become one, he had to wait 6 months for the next training course. Wondering how to fill in his time, he perused the local papers and saw an advertisement for hospital orderlies and decided that he would give it a go. This chance reading of the newspaper would prove a key turning point in his life for he quickly became engrossed in the work and once his 6 months were up he decided that rather than become a probation officer he would retrain as a Psychiatric Nurse.

So began what Ian always considered to be the most fulfilling part of his professional life and he often said that if he had had his time to do again he would have trained as a Psychiatrist instead of a Lawyer.

Starting out as a Psychiatric Nurse, Ian would advance to become a Psychotherapist, working in and around Barnet. He loved the life and here again made countless friends who included not only professional colleagues but also many of his former patients.

Ian lived a full and active life and regardless of what he did, be it professional or private, he could always be counted on for support and friendship. Though in the last few years of his life, ill health restricted his movements, he remained upbeat and inquisitive. Frequent visitors to the house kept him abreast of the latest gossip and his thirst for news, music and books never left him. He was particularly fascinated by Brexit and its impact on Britain and frequently said how much he would like to live long enough to see its full impact.

Just looking around at everyone who has so kindly attended this afternoon you can see how much he meant to people across the generations. He will be greatly missed. 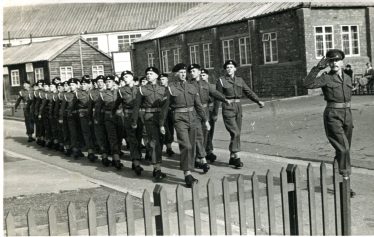 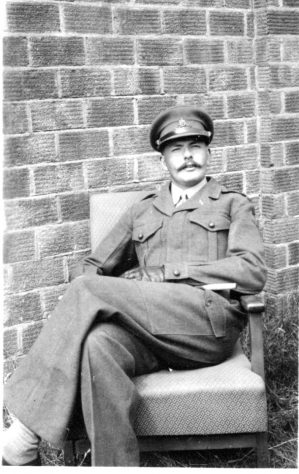 John Wyborn, who was at Moreton End School with Ian, recalls: 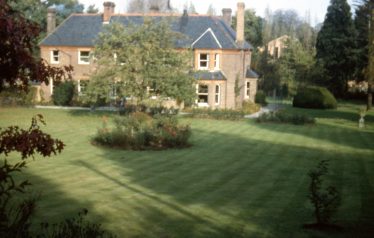 “Ian and his sister Jill were unusual during the war in that they were looked after by a governess – a Scottish lady I remember quite well. The reason was that both parents had careers. Ian’s mother was secretary to Leslie Burgin, Liberal Member of Parliament for Luton. He lived at Aplins Close, a large house at the bottom of Townsend Lane. Possibly this is what brought the Fulton family to Harpenden: it surely explains why Ian would have gone to Westminster School.  MPs and their secretaries were greatly respected in those days.” At this time the Fulton family lived in Rosebery Avenue, before moving to Toftwood on East Common.

In addition to his support for the Harpenden Society and the other organisations mentioned in David Hodgson’s tribute, Ian supported the Upper Lea Valley Group in its work to develop the Lea Valley walk, which he opened in March 1974 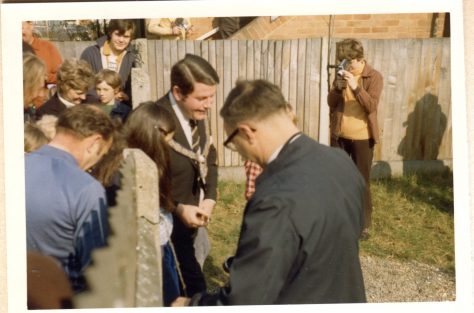 Ian, Chairman of Harpenden Urban District Council, at the opening of the Lea Valley Walk, March 1974 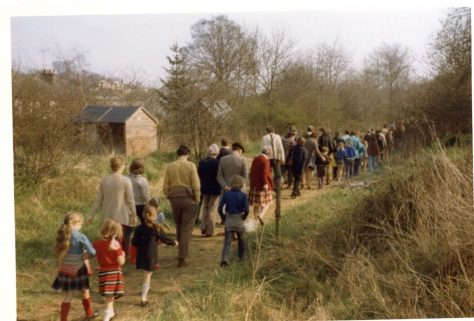 The first walkers along the Lea Valley walk, March 1974 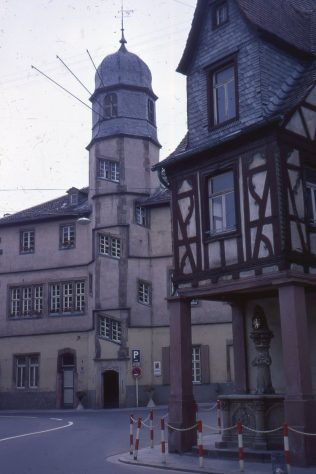 With his love of the German language, Ian was a strong advocate of the town-twinning link between Harpenden and Alzey, including the very close friendship between the people of Alzey and the National Children’s Home, of which he was an actively engaged Governor. When Harpenden Urban District Council was dissolved into St Albans & City District Council in May 1974, Ian in his role as the last Chairman of the UDC and first Mayor of St Albans expressed great concern about any loss of the direct link between Harpenden and Alzey. 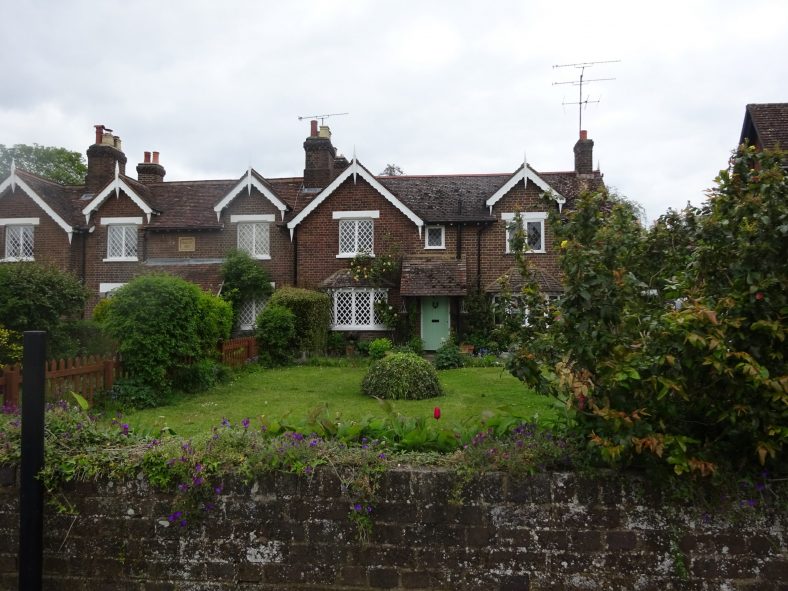 'Adieu' by Ian Fulton, read at his funeral (28 KB PDF, opens in a new window)