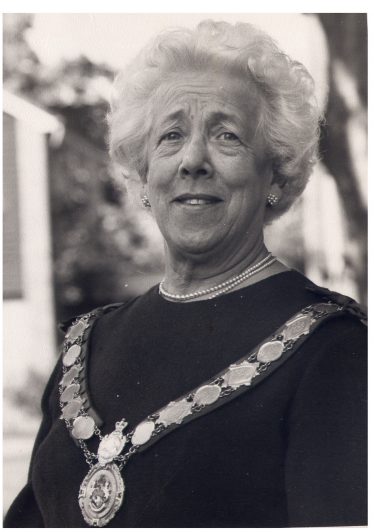 Winifred Wyborn was persuaded to stand as a Conservative candidate in the East ward of Harpenden Urban District Council in 1964. Her husband had died in 1962, and she was left with very straitened means. Living in Common Lane, she was sympathetic to the needs of the newly built Batford estate and she worked closely with Labour councillor John Fryd on many campaigns concerning housing and NHS services. Her cuttings album gives an insight into the issues on which she spoke at Council meetings, and issues she took up through the local press. The detail of reporting in the Harpenden Free Press and Herts Advertiser of the 1960s and 1970s enables us to see which Issues she took up soon after her election in mid 1960s which included:

Other cuttings show her support for town-twinning with Alzey in Germany, and many local organisations including the Courage Club, Darby and Joan Club, and The Electrical Association for Women. The highlight of her Council career was serving as Chairman of Harpenden Urban District Council from 1971 to 1972, and her album contains many of the press photos of that period. With local government reorganisation in 1974, she did seek election to the newly formed St Albans City and District Council, where she served on the health committee. She was made an Honorary Alderman on her retirement in 1979.

Our archives contain files of papers from other notable public figures, such as Fred Gingell, which await volunteers to sort, catalogue and then write about their contributions to Harpenden.