The Harpenden Free Press of 14 October 1949 announced the death of Jesse Catton on the previous Monday, a week before his 79th birthday. 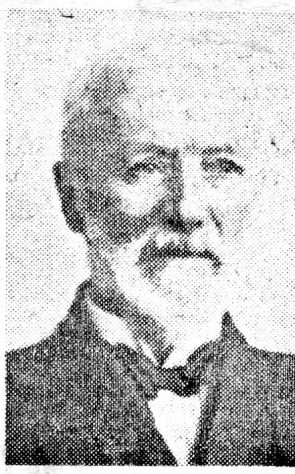 He was described as “one of the ‘pioneers’ in the development of Harpenden from a peaceful, little-known village to its present size and importance … As a builder Mr Catton was responsible for the development of much of North Harpenden, including the Roundwood Estate. And – a lesser-known side of his character – he was among the founders and supporters of many of Harpenden’s social and sporting clubs. He always preferred to keep out of the lime-light, but made many anonymous gifts to the village, including the sandpit on the Common, so popular with Harpenden’s children”.

Jesse Catton was born in Norfolk, but went to London as a boy where his first business was a Balham cycle shop. Later he became a builder and developed much of the old part of Cricklewood. 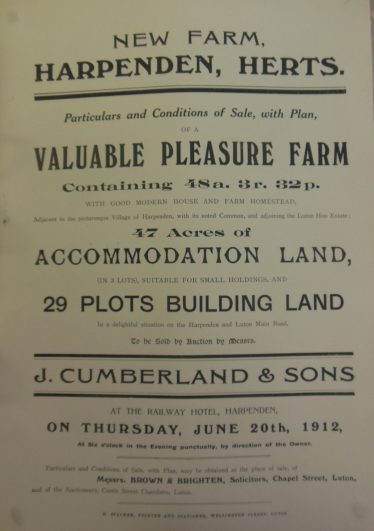 Was this the land that Jesse Catton acquired for the Round Wood Park estate?

According to the HFP account, he began development of the Roundwood Estate in 1910. In Kelly’s directory for 1913/14 he and Frederick Hawkins are listed at ‘Roundwood’, in the newly re-named Roundwood Lane (it was still New Farm Lane in 1911). Frederick Hawkins continued to be listed at ‘Roundwood’ through the 1920s, and new houses were built along the western/upper end of Roundwood Lane towards New/Wood End Farm.

Houses in Roundwood Park are listed from 1924 onwards, three or four being added each year until Kelly’s directory for 1938. For a number of years there was an Estate Office in the name of Frank R Catton, at the end close to the footbridge over the Nickey Line. James Wright Salisbury (jnr) had moved into High Croft in Roundwood Lane by 1930. 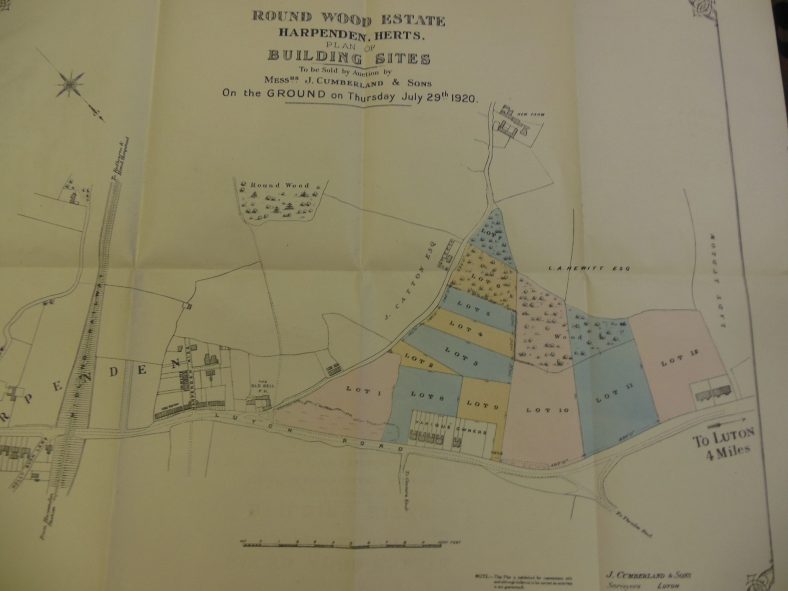 Plan showing Jesse Catton’s land to the west of Roundwood Lane, and plots for sale to the east

The auction brochure for the sale of “The Round Wood Building Estate” on 29 July 1920, shows Mr Catton’s land on the south side of Roundwood Lane and “12 Freehold Building Sites”, lots of between one and eight acres. The brochure in our archives (LAF 13.1A) is annotated in pencil with bids. Lots 5 and 6 were sold ‘privately’ and .there was ‘no bid’ for lots 10,11 and 12.  Lots 7 and 8 are marked ‘Beckett’ and lot 9 ‘G Deamer’. Yet in 1920 Jesse Catton built ‘The Ridge’ on this land, which he accessed by a long drive (still surviving as a footpath) from Luton Road. Here he settled in Harpenden with his wife. The lands associated with The Ridge were developed from the late 1950s as the Ridge(wood) Estate. 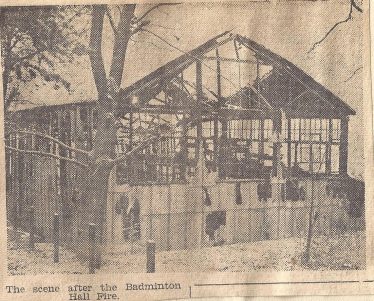 Jesse Catton also developed large areas in Kinsbourne Green – including the Green Lawns garage and country club. He built Harpenden Badminton Club Hall at Luton Road/Moreton End – one of few purpose-built halls in the country, which had had membership of 200 before it burnt down in 1942 – and in 1938 he donated money to the Harpenden Urban District Council to enable it to purchase the Batford Meadows for use as playing fields.

The HFP also reported that “Farming was another of his interests and he farmed extensively here, also retaining property in Norfolk. For years he attended St Mary’s Church, Kinsbourne Green … He held Manorial rights at the church and was for some time Lord of the Manor of Kinsbourne Common.”

NB  Though we have auction and sales documents for many parts of Harpenden, we have no records to show how and when Jesse Catton acquired land — however auction brochures for sales of land in 1912 and 1920 appear to correspond to land he developed. 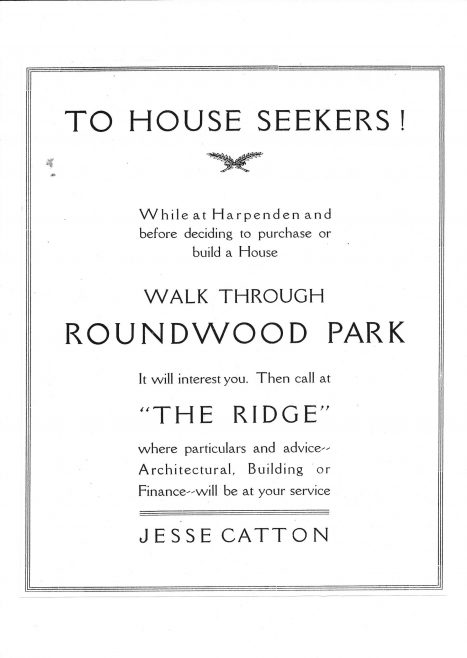