Allen Anscombe was born in Hampden, Middlesex in 1824, of a non-conformist family of Protestant Dissenters, as is shown on the certificates of birth for him and his brothers William and Samuel. They were registered one after the other on 15th January 1833, four or more years after the births, and certified by the same nurse and midwife. 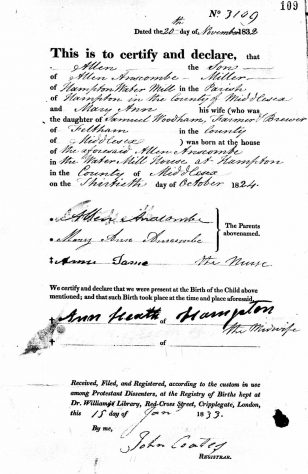 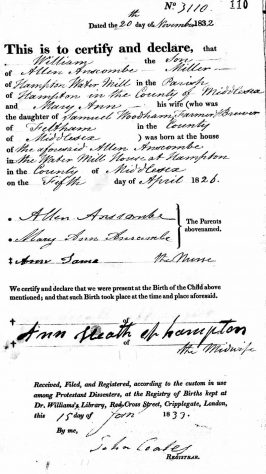 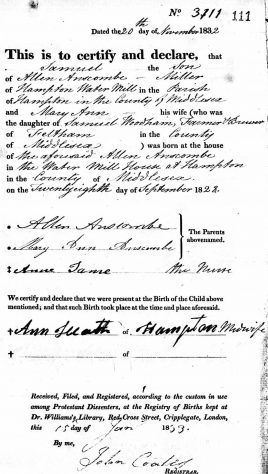 Allen had served an apprenticeship as a draper and moved to Harpenden by the early 1850s (for the 1851 census he was still in Redbourn as assistant to Jebez Cherry draper and tailor). It would appear that he acquired/rented Wellington House on Leyton Green . Here he opened a grocers and drapers shop in rooms fronting Leyton Road. The shop expanded along Leyton Road over the following century to become the department store, Allen Anscombe & Sons. And he and his family became deeply involved with the Independent chapel in Amenbury Lane. 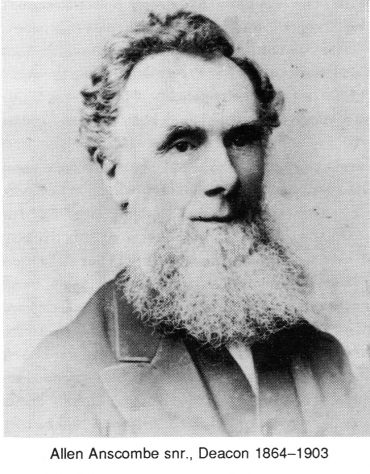 Allen Anscombe, founder of Anscombe & Sons in 1855 – Credit: Scan from “Gathered Together” p. 16, by Mary Skinner

The Record of a Hundred Years – 1822-1922 – of Harpenden Congregational Church by George Williams records the contribution of the Anscombe family to the growth of the congregation. In 1864 Mr Anscombe (Allen snr) and Mr (Henry) Lines were unanimously elected Deacons of the chapel in Amenbury Lane which had been built in 1840. They each pledged £25 contributions to the appointment of a pastor. Allen Anscombe had already given his support and finance towards the British School (established in 1850). He was actively involved as Secretary and Treasurer through periods of growth and reorganisation of the Chapel (See George Williams Record (LHS archives BF 26A.5/1). 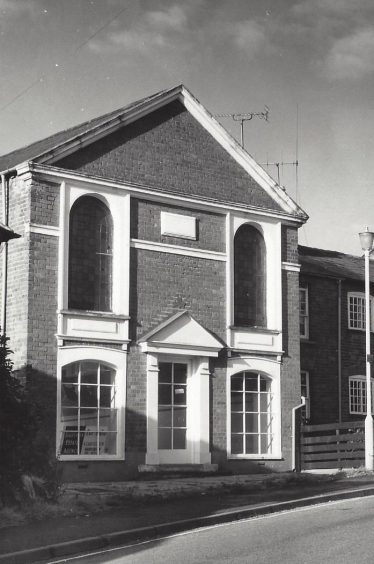 The Amenbury Lane chapel was renovated in 1877 and further extensively altered and refurbished in 1887 to the design of Mr Arthur Anscombe, architect son of Allen Anscombe. This included the replacement of the front Georgian windows with Victorian-style windows (possibly not carried out), and the interior was “redecorated with dados, wood graining, stencilled patterns, and friezes in tune with fashion of the day” (Mary Skinner. Gathered Together, 1990. LHS archives BF 26A 5/2)

Expansion and re-location to Vaughan Road 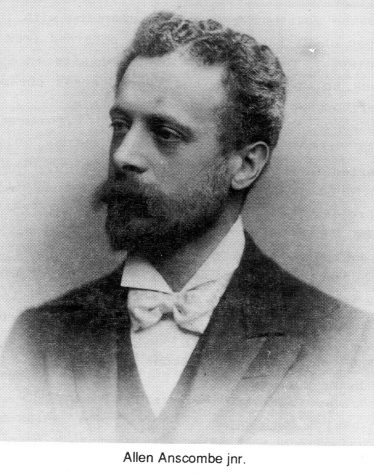 By this time a site in Station Road had been bought for £450 [from Allen Anscombe], and vested in the Trustees, but early in 1896 it was resolved to sell this site, and to purchase instead, one adjoining and having a frontage to Vaughan Road. This exchange effected a saving of some £130 and the Station Road site was developed as shops (24 & 26 Station Road) by the Anscombe sons. 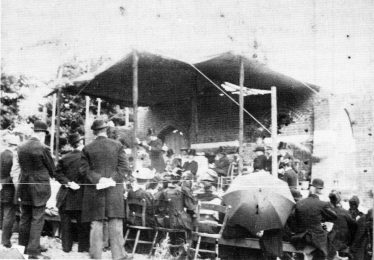 Stone-laying ceremony for the new church, July 1896 – Scan from “Gathered Together” p. 21, by Mary Skinner

Arthur Anscombe drew up the plans and obtained quotations for building the new church. The foundation stone, by the porch facing down Vaughan Road, was laid in July 1896 and the building was completed in early 1897.

The Rev Price married Allen Anscombe’s daughter Edith a month after the opening of the new church in 1897, and the reception was held in her brother’s home (Allen Anscombe jnr), Hazelbank in Leyton Green. Although the Prices later moved to Scarborough, they retired to Harpenden in 1931 and lived in Overstone Road. 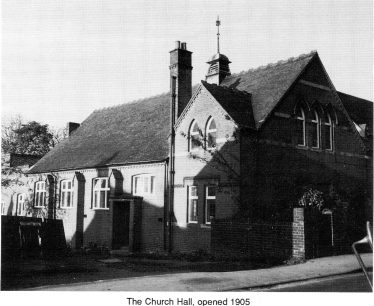 The Amenbury Lane chapel had been maintained for use by the Sunday School, but was suffering from damp. It was decided to sell this chapel to the Salvation Army and to use the proceeds and further fund-raising to build a lecture hall and Sunday school adjacent to the new church. Several plans were considered and finally a plan with the front of the hall facing Victoria Road was chosen: the architect was Arthur Anscombe. Henry Salisbury built the hall which was opened in April 1905. 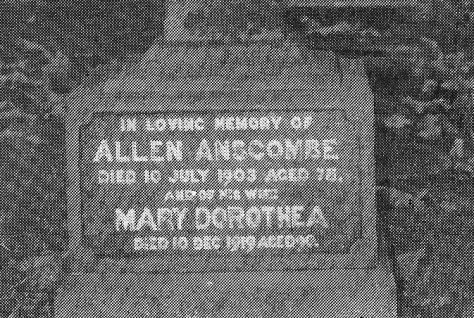 Allen Anscombe (snr) died in 1903, and in 1908 a new pulpit was dedicated in memory of the loyal deacon who had been associated with the church for fifty years.

We have no information of his training as an architect, but he set up his architectural practice in Vaughan Road and is listed in Kelly’s directory on the south side of the road, below the church site until 1911 (when there is an entry for him at Heathside, East Common). From 1913/14 he is listed on the north side of the road, between Edgar Salisbury’s Kingston House premises and Jeffrey’s Printers – later to be No.9 Vaughan Road where he continued his architectural and surveyor’s practice until his death in 1941.

Projects he is cited for, in addition to the church designs mentioned above, include extensions to the Anscombe department store in the 1890s (though this may have been the work of his surveyor brother Ernest, according to Stephen Egarr’ brochure of 1982), and the Victoria Road school for Harpenden School Board, in 1896/7. The list must be longer, and we hope that in time Harpenden residents will examine their deeds and discover whether Arthur Anscombe also designed houses.

The rest of the Anscombe family

We hope that more information about Ernest and other members of the family will emerge from family papers. Meanwhile Hugh Anscombe, (great-grandson of Allen Anscombe snr) has sent a scan of this treasured family photo, taken at Hazelbank. 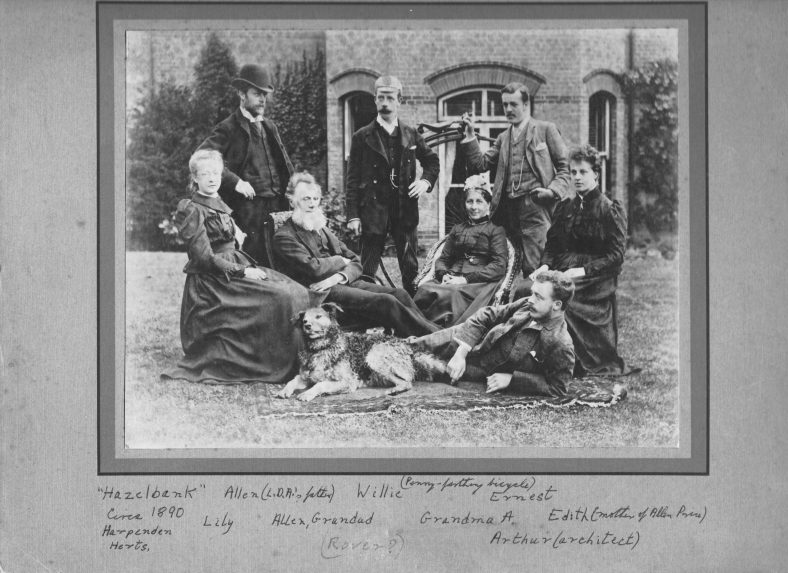 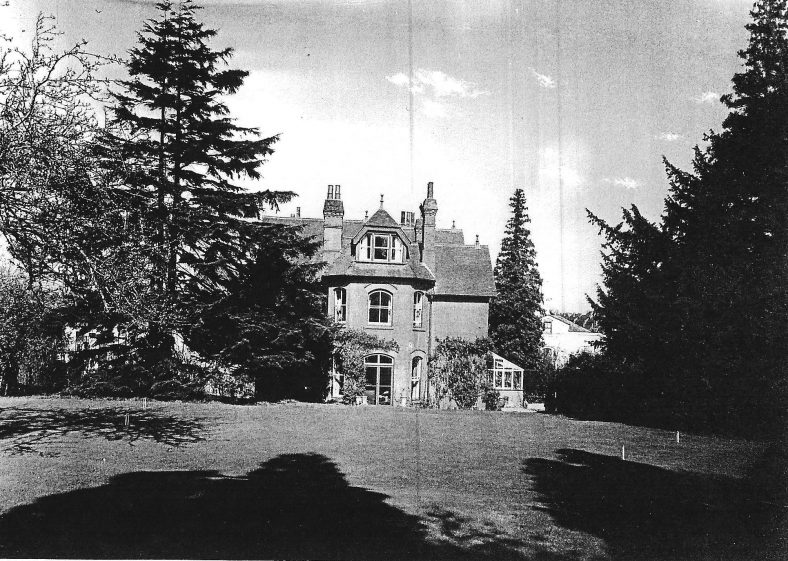 Hazelbank, viewed from the gardens on the west side. Wellington House can be seen in the background.m- LHS 464