Reminiscences of her life in Harpenden 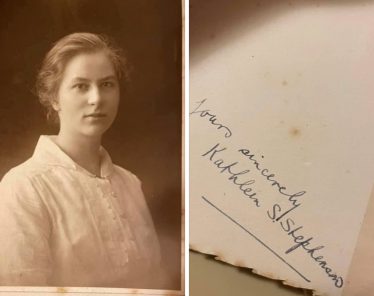 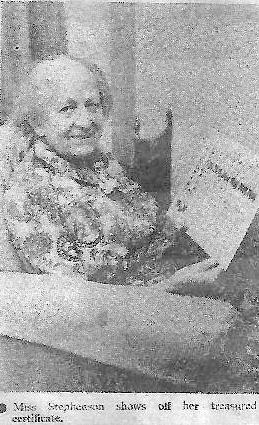 zoom
Photo of Kathleen Stephenson with the certificate from the Church, from the newspaper report of her move to York 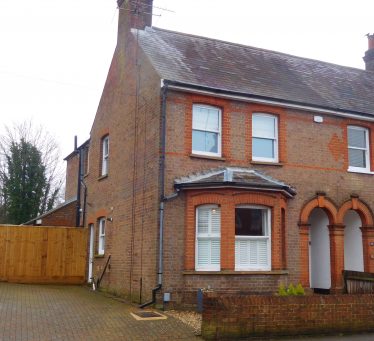 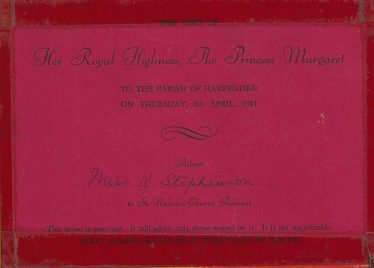 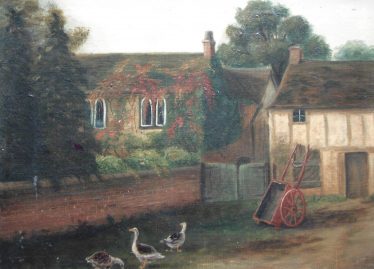 zoom
Cottages at Church Green by K S Stephenson The cottages were across the entrance to Rothamsted Avenue - Ivy Cottage on the left.

In the Harpenden & District Local Society’s archives there are several mentions of Miss Kathleen Stephenson and in particular two items: ‘I remember’ by Kathleen herself about her life up until 1914. (BF 20A.3.14) Extracts below.  She had moved to York before she wrote this, hence the address.  The second item is a newspaper report published in the Harpenden Review in 1976 just prior to her move to York. (NC-CC 3.47)

Extracts from ‘I Remember’

“I was born in Harpenden in 1896. My father had been appointed Head Master of the Church School, the National School as it was then, in 1894, and since he loved the Village, and found there ample scope for his work and talents, he stayed in Harpenden until his retirement in 1930, and then until his death in 1940, leaving the family house to me, and that was my home until 1976.

Two books which contain many of my own memories, I have read with great interest. They are “Thirty Years in Harpenden” by Miss Vaughan, and “Cottage Life in a Hertfordshire Village” by Edwin Gray. In fact much has been written about life in Harpenden before 1914, but perhaps I might fill in a few gaps with personal recollections.  Miss Vaughan was the daughter of Canon Vaughan, the first Rector of Harpenden Parish when it was separated from the Parish of Wheathampstead. Canon Vaughan officiated at my baptism.

An annual event which I enjoyed as a child was the cricket match between the Parish Church Choir and the Bellringers. This was Held on every August Bank Holiday, on the playing field of St. George’s School, and for this event the weather always seem to be fine, hot and sunny! St. George’s was then an independent school, and the Head Master was the Reverend R.H.Wix, who later became a Curate in the Parish, with special interest in children and young people. After his retirement from school he lived at a house called “Wenduyne” in one of “The Avenues” (Rothamsted Avenue). The cricket match lasted all day. Lunch was provided for the teams, and their families enjoyed a hearty picnic tea on the field.  Some of the players showed remarkable prowess and skill, and the hospitality of St George’s, including the use of their pavilion, was much appreciated.

Kathleen then records her reminiscences about the gymnasium

Other exciting occasions for me were the torchlight processions which took place on November 5th – finishing at the bonfire on the Common. Sometimes “floats” carrying different scenes would take part. I remember on one occasion being allowed to stand at our garden gate to watch the procession pass. One “float” carried a scene with Red Indians. I quite thought they were real, and was glad to retreat to my safe bed.

“Hospital Sundays” were always great days for processions when the fire brigade and other organisations would take part. Church Green and the Common were lovely open spaces for these events, which suffered little disturbance from road traffic and none from aircraft!

On all these outdoor occasions it was very rare to see anyone bare-headed. Hats and caps were the order of the day for both adults and children. This may be noted in many old photographs of Harpenden occasions.

The “Statty” or Statue Fair, which I understand had been held since the time of Henry VIII on the Third Tuesday of September, was another glorious event when practically all able-bodied inhabitants turned out to enjoy the delights of cokernut (sic) shies, roundabouts and swings:  a quiet time for little children in the afternoon and a more riotous time for young people in the evening. There were no cinemas as such, but shows of “moving pictures” were beginning to be seen in available halls and occasionally in a booth at the “Statty” but I was not encouraged to visit the latter, or to purchase sweets made by the “Fair” people. They sometimes threw a rope of sweet mixture over a hook on the side of the caravan and then putted it hard, repeating the process many times.  It was fascinating to watch, but wash bowls for hands were not then compulsory!!

Yes! we enjoyed our simple pleasures in those days before 1914, without the aid of radio or television and I still enjoy re-living those times, but the shadow of the first world war persists in hanging over them.

The Harpenden Review Article Reporting Her Move to York

Moving house is a trying and chaotic business at the best of times. But when you’re 80 and doing it for the first time in your life you might be forgiven for finding it all just a bit too much.

Not so Miss Kathleen Stephenson , a lovely spry old lady we met the other day.
She’s leaving and packing up treasured belongings of a house she has known as home ever since she was born. And she is looking at the 250 mile move to Yorkshire as the beginning of an “entirely new life”.

Miss Stephenson is a well-known Harpenden figure. Her parents originally bought the house which is now her home when it was first built in 1895.  Her father was head of St Nicholas church school for 36 years and Miss Stephenson followed his footsteps into teaching after taking her degree at London University. That was just after the first world war, “it was at a time” she say “when it was important for women to have a career of some sort.”

She has taught at Nottingham, Watford, Peterborough and, finally for some 27 years, at Luton High School.

It was during this time that Miss Stephenson began her marathon stint as a much valued member of St Nicholas Church choir.

A couple of years back the Rector, the Rev. John Waller, presented her with a certificate for her long service. That certificate sits proudly on her mantelpiece.  When she moves into her room at the Masonic home in York, it could well be one of the first things she unpacks.  Recently members of the church choir gave her a farewell party and she says she will miss them all terribly, “but I shall be near my brother. That’s the crux of it”.

Others who will miss Miss Stephenson are former school pupils still living in Harpenden, and members of various clubs including the British and Foreign Bible Society, and the village branch of the English Folk Dance and Song Society.