The Diary of a Visit to Harpenden in 1962

In 1962 Abel Banwell visited Harpenden, where he had lived as a youngster between 1896 and 1912 when, with his mother, step father and some of his siblings, he emigrated to Australia. He was the son of Joseph Banwell who took over as publican of the Foresters Arms after the death of his father-in-law, Frederick Deamer. 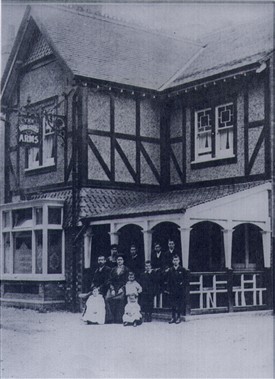 Abel kept a diary of his visit to Harpenden and although only in note form it records his thoughts and gives a feel of his impression of Harpenden and St Albans (he named his first son Rex Deamer Alban because of his love of the city). His granddaughter (Peta Coldwell) who sent this to the Society has removed the ‘complaints about his sister’!  She was Mabel (May) Course (nee Banwell) and lived at no. 3 Harpenden Rise where Abel stayed during his visit. Their  brother Joseph Frederick Banwell lived at 190 Station Road.  Neither May nor Joseph had gone with the family to Australia.

People mentioned in the diary include Muriel and Raymond (Ray) who were Dr Blake’s children and friends of the family.  According to the 1962 Kelly’s Directory, Jn R Blake (John Raymond) lived at 4 Orchard Avenue.

‘Mother’ was Rosina Mary Tong previously Banwell, nee Deamer who, with Reginald Victor (Reg), Abel’s brother, had returned to England and presumably settled in Houghton Regis.  After their return Reginald at some stage lived in Harpenden; was in Luton when he died but it seems he was buried with his mother.

Wednesday June 6th
Muriel Blake called to see me for the 3rd time. Fancy looking me up. A very charming person. Gave me a photo of the old home. Am having dinner with her, Molly and Raymond before returning to Australia 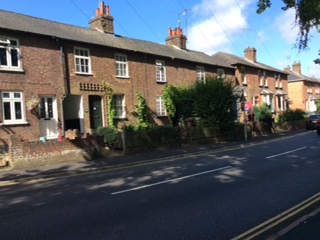 190 Station Road (behind the bush) 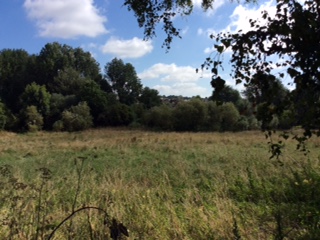 View from 190 Station Road; the river Lea is below the hedge line

Invitation to Brother Joe’s. WOW! Down by the River Lea.What a great guy he is. He gave me his first Army issue spoon – Dragoon Guards.

Tuesday June 19th
Went to St Albans’ Abbey. Spent 2 hours looking around. Muriel Blake nattered in street for ½ hour – the days of change are not past. 74 years, pushes a bike.
Sunday July 1st
Wally took us to Kathleen’s (Joe’s daughter) for tea, a nice afternoon and evening. Made a foursome at Dominoes. Won 2 lost 3. They all blamed Aussie, told them we could still play Cricket. Arrived home here at 10pm. Cocoa to Bed.

Monday July 2nd
Met old school friend Jack Sygrove. Had a talk for an hour of our school days and the beltings I used to get. Once for climbing the ivy up the Church front to get birds’ eggs. I had forgotten all about it.

Wednesday July 4th
Another wet, cold day. Went to Village, bought cod fillets for tea. Speaking with the new owner of Anscombes, paid £60,000 for it. Had been in the family for 105 years. I was looking for a koala bear, I don’t think he knew what it was. He said I have a Meccano set, I told him I could not cuddle that.

Sunday July 8th
Usual walk again to Village, sat in the shadow of the Foresters Arms – my old home.

Met an old inhabitant, asked me was I a visitor. I sat and listened to a garrulous old chap but was really entertaining. I gave him 2/- and said, have a drink with an Aussie and got up and left.
On way home met a lady and enquired of W H Marsh who I wish to meet before leaving England, she replied “I’m his wife”. I explained and have an evening appointed for next Tuesday.

Thursday July 12th
A day to remember. Ray Blake (Dr’s youngest son) called for me in car and took me to Muriel’s (sister) for afternoon tea. Then went on to meet his wife Gwen, spent an enjoyable 2 hours over cocktails and reminiscing over our young life of the Village. What a great guy he is. I said “where did you get the broadness of mind.”  He said “I too came up the hard way, nearly 30 years abroad. One learns much.”
I have to dine with them 15th August. I too must entertain them to dinner at Glen Eagle Hotel and show Australian Hospitality.
A good day.

Wednesday July 18th
Quiet day. Went to Village twice. Saw old friend Miss Lines. When I called she said, ‘Do come in, sit down now and let me look at you’.
Stayed for half an hour, promised to call again. She is 83.

Saturday July 21st
Brother Joe arrived this morning. Went back into the Village with him and talked of days long ago. Met an old girl chum Grace Basil, I asked after the old gang; the two Lilians.

Wednesday July 25th
Did St Albans over again today. A lovely old city. Arrived back before the rain started and is now pelting down – a promise of a wet night. Got a few antiques here near the Abbey. Sister thinks I’m nuts.

Saturday July 28th
Did shopping in Village and will now have to laze around and sleep or go for a walk – I think I’ll decide on walking. Went as far as Klondike cottages where I lived as a kid. [at no. 12 Klondyke Cottages, now 339 Luton Road]. 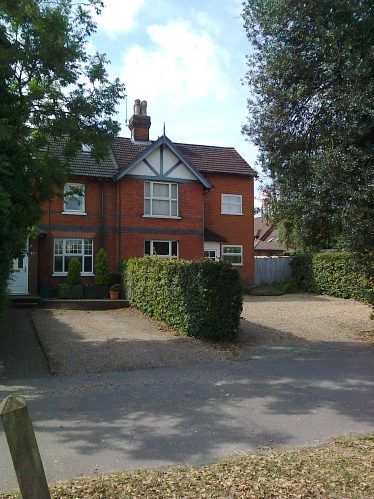 The place has not altered, only looks more mellow now the trees are fully grown. Holly tree 20 feet high that Dad [Joseph snr] planted at the small gate entrance. [tree still there in 2016]  Went and said goodbye to the District Clerk. Very likeable chap.

Sunday August 5th
Went walking in the morning. Down to Great Northern in afternoon to Joe’s. Remained for tea, played cards and yarned. I like his wife Kate [nee Course, May’s sister-in-law]. Lived in the same house all her life over 70 years.

Wednesday August 8th
Nice day, a little sun. Ray Blake called to see me – going to Ashridge, a sylvan spot, with him on Thursday for lunch at an old country pub.

Sunday August 12th
Going to Wallys to tea this arvo [afternoon], Joe and Kate will be there.
A lovely afternoon. Had tea. Wally then took May, Joe and I to Houghton Regis Churchyard and we three put flowers on Mother’s and Reg’s grave.
I felt a little upset.

Tuesday August 14th
Went to Village to get fish for lunch. On way out met my girl friend Muriel Blake. Walked along tree lined road conversing. She gave me photos of her Father and Mother, also her Father and Marcus. Having coffee on Thursday to say goodbye. She had not seen me and was on way out to the Rise thinking I was ill. Ray is also looking for me. 12 o’clock midday, rain set in. 3 o’clock, still raining heavily. 6 o’clock, still raining heavily.
Will call it a day.

Wednesday August 15th
Off to Reading to see the Hedges Family. Trust it holds fine. Went to Reading, wonderful reception. Met son and boys. Bert and wife just the same dear people. Rather proud of myself getting around London on my own. Was back at Harpenden at 7 o’clock after a wonderful day. The Thames looked really lovely.

*******
“I am the happiest man on Earth
With a single flower from her Bunch of Roses
I look in the glass and I see today only an old man worn and grey
Bending my head in a Bunch of Roses.”

Letter written in 1888 to my Mother [Rosina Mary] by Aunt Sarah re the Family Bible, still well preserved

October 23/1888
Dear Mary,
If you live to see your eldest daughter live and grow up and marry.
Give her this Family Bible on her wedding day with a blessing from her loving great Aunt and Godmother.
Take great care of it for Margaret.
F.S. Patching
nee Millard