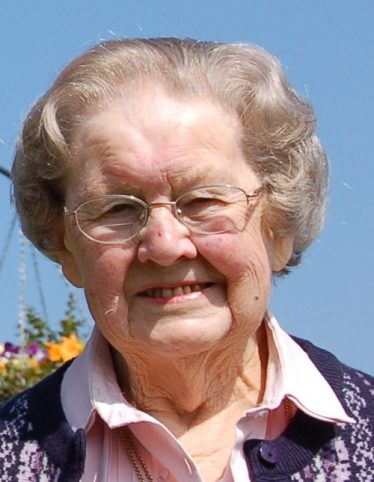 Amy’s death on 19 February leaves a great gap in the collective memory of the Local History Society. “Ask Amy” was the reply to many a query about people, places or old records of Harpenden – and Wheathampstead – history.

Mary Amy Wren was born in Wheathampstead in 1927 and educated at the village school, before going on to work at Roche Products in Welwyn Garden City as a comptometer operator. She married Leslie Coburn, a ‘Harpenden man’, in 1949 and moved to live in Lea Road, Harpenden. As Leslie became frailer, they moved to Piggottshill Lane. Here too she made wonderful garden.

Amy had been interested in local history since childhood, having listened attentively to stories her grandparents and other villagers told her about life in Wheathampstead. She joined Lionel Munby’s WEA class in 1970, and together with Eileen Haines and Daphne Godwin spent many long hours copying and transcribing documents in the Hertfordshire Archives – the source materials for the WEA booklets on Wheathampstead and Harpenden. She was a founder member and first membership secretary of the H&DLHS.

Over some 40 years Amy gave well over 300 talks to local schools, groups and clubs. Our daughter remembers her coming into Crabtree school in the 1970s “bringing a Roman lamp, and also her help with so many school and Guide projects” – which led her to taking up a career in social history curating.

Amy wrote many articles for the Society’s Newsletter, and longer studies based on her researches, including George and Henry – the stories of her Wheathampstead grandparents. Over many years she worked through the journals of Theodora Wilson, who had lived at Rivers Lodge. She was co-editor with Ruth Nason of the highly acclaimed Theodora’s Journals, published by the Society in 2012.

In the days of monthly exhibitions, Amy mounted or helped with many of them, bringing her into contact with the curatorial team at St Albans Museums, particularly Felicity Hebditch. In 2001 she was the proud recipient of one of the first awards by the British Association for Local History for services to local history, in recognition of her meticulous scrutiny of maps, documents and evaluation of people’s memories.

Amy worshipped at St Nicholas Church and will also be remembered for her life-long enthusiasm for bell-ringing. She was tower secretary for many years and President of the Hertfordshire County Association of Change Ringers for 1983 and 1984, their Centenary year, and was involved in the project to have the bells of St Nicholas re-cast in 1990.