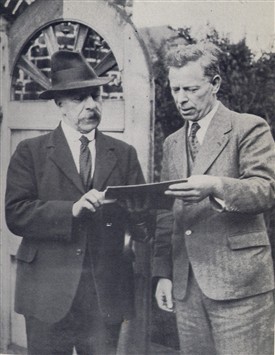 Edwin Grey was born in 1859 in the Bowling Alley district and lived all his life in Harpenden. As a boy he was a member of the choir at the mission room of St John’s, Southdown. His association with Rothamsted Experimental Station began at the age of 13, when choirmaster Mr Willis invited him to sort grasses at Rothamsted, where he was Field Superintendent. After leaving the British School Edwin joined “The Lab” aged 15, and his career with Rothamsted spanned a remarkable 67 years. During this time, he held various positions, including sorting grasses, supervising Rothamsted field workers, including P.O.W’s during WWI, taking meteorological records, until eventually succeeding his mentor Mr Willis, in becoming Farm Superintendent. He officially retired from this position in 1940, but continued working at Rothamsted on a part-time basis until advancing years forced him to finally leave.

Edwin and the staff of Rothamsted

Cover page of Reminiscences, Tales and Anecdotes of Rothamsted book

Over the years Edwin gave a number of lectures to Rothamsted staff, in which he included reminiscences about the institute’s founder Sir John Lawes, whom he had known from a young age. At his 50th jubilee with “The Lab” Edwin published Personal Reminiscences of Rothamsted Experimental Station 1872-1922, which included tales and anecdotes of the laboratories, staff and experimental fields (available to read online within Rothamsted Archive catalogue). Just prior to this he can be seen in a group photo of Rothamsted staff in 1919, outside the Russell Building, and in another staff photo taken at the same place during Rothamsted’s centenary year in 1943, Edwin can be seen on Sir E.J. Russell’s left. The photo also demonstrates wartime use of ground for growing vegetables. 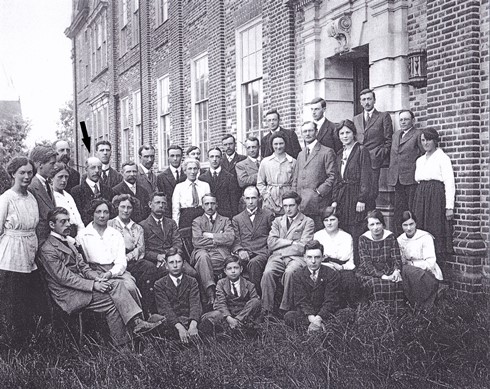 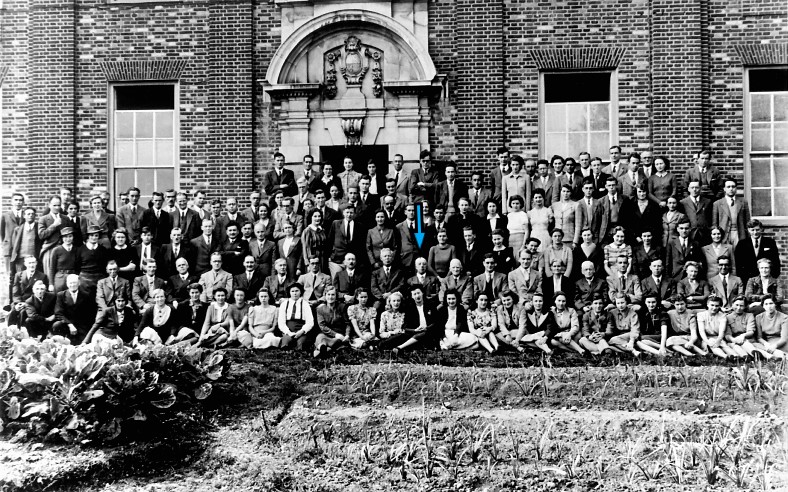 The marriage of Edwin Grey and Adelaide Price of Harpenden, daughter of plumber John Price, took place in October 1888. The couple lived firstly in Holly Cottage, Upper Cravell’s Road, where they had a daughter Francis Edith in 1890. Their front sitting room was used by the owners, Harpenden Golf Club, as their official club room, and Mrs Grey provided teas for the members and their friends. The Greys subsequently moved to one of the cottages which adjoined The Laboratory, at West Common, where they had a second child, Harold in 1892, and Edwin’s mother Phyllis also lived with them. 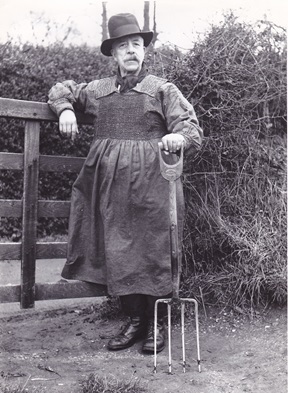 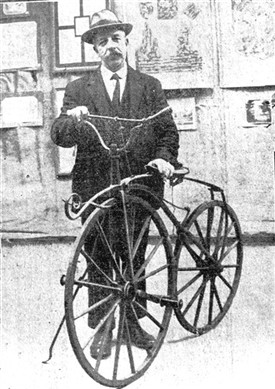 Edwin was involved in many local activities including belonging to the Church of England Temperance Society of which Sir J.B. Lawes was President; he participated in local entertainments and Church social events and assisted the Secretary of Harpenden Horticultural Society in his duties. He was also Secretary of Rothamsted Allotment Club from 1891- 1923, when he had to resign due to ill health. During his various lectures he would recount tales of the Club, including its annual dinner where “Squire Lawes” would carve the “joint” of salt beef weighing around 90lb, which he had donated. At an exhibition of Bygone Harpenden held in the hut of the headquarters of Harpenden Scouts in 1924, Edwin was photographed with an old boneshaker bicycle he used to hire out for a fee. 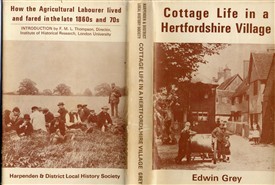 Cover from Cottage Life in a Hertfordshire Village book

Encouraged by Rothamsted Director Sir E.J. Russell to write about the life of the agricultural labourer in 1860s-70s, Edwin published his second book, Cottage Life in a Hertfordshire Village, in December 1934. The book is descriptive of life in the cottage homes in Harpenden as he knew it when a boy, and was favourably reviewed in national and local journals. He also collected sketches and photographs of “Old Harpenden” which he annotated to show more detail of community life and used in his talks. A collection of 12 of these are shown below.

After his wife Adelaide died in 1935, Edwin retained his cottage adjoining The Laboratory for a further 10 years, and then went to live with his daughter, now Mrs F.E. Bath, in Luton Road.

Demonstrating his mental agility, in his 87th year Edwin composed two variations of a poem – Harpenden Common in Days of Peace, Long Ago and Harpenden Common in Time of War. He subsequently co- authored with Lady Carbery the book Hertfordshire Heritage: ourselves and our words, which was published in 1948.

Such was their high esteem for Edwin that members of Rothamsted Staff Union held a tea party at Red Gables to celebrate his 90th birthday in 1949, where they also presented him with gifts. 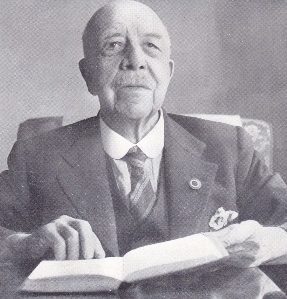 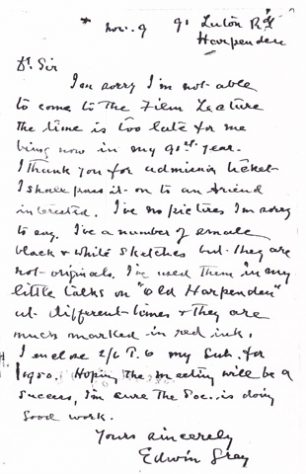 Letter from Edwin Grey written in his 91st year

In a letter written in his 91st year, Edwin apologises for not being able to attend a Film Lecture, citing his advancing years, but mentions his annotated sketches of Old Harpenden which he used in his “little talks”, and remembers to include his subscription fee of 2/6 to the “Society” for 1950!

Edwin Grey died in January 1955 in his 95th year at his daughter’s home in Luton Road. 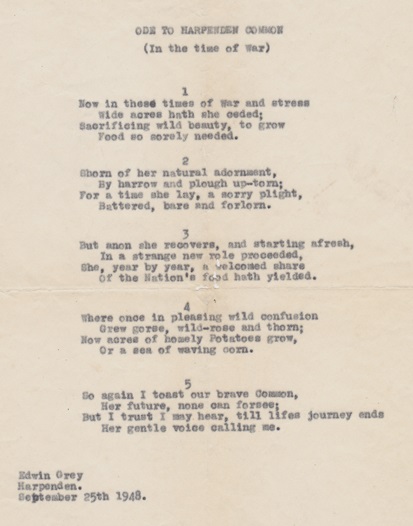 Edwin’s “Ode to Harpenden Common in Time of War”

Edwin’s annotated postcards and sketches have been much reproduced. His originals are in the Local History Archives – RB 27 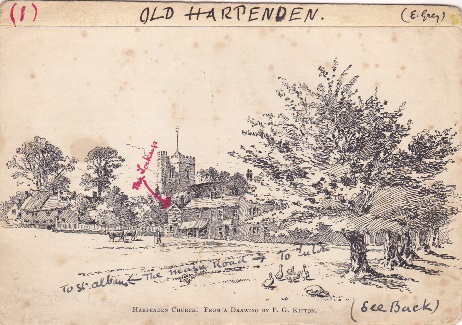 Old Harpenden (1) Church and Church Green. On reverse Edwin wrote"The lock-up (site) now altered is occupied by Mr Gardner the decorator. The shop with the awning was a fish shop kept by the [niker] and is still kept (at the time of writing) by Mr Sampson. The "School Gardens" now are where the old cottages are seen on the left hand corner of the sketch"
LHS Archives - LHS 16251 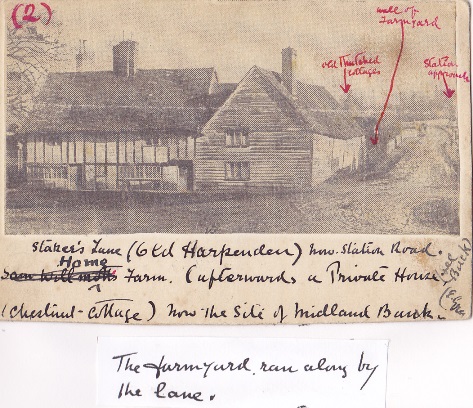 Old Harpenden (2) Stakers Lane. Edwin's script from the reverse side is shown under the image
LHS Archives - LHS 16252 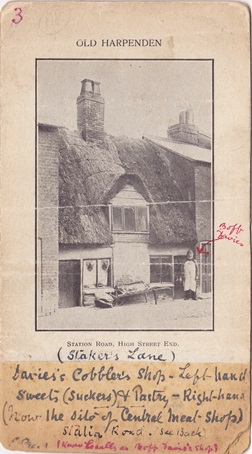 Old Harpenden (3) Station Road, High Street end. On reverse is written "There were one or two steps down into rooms"
LHS Archives - LHS 16252 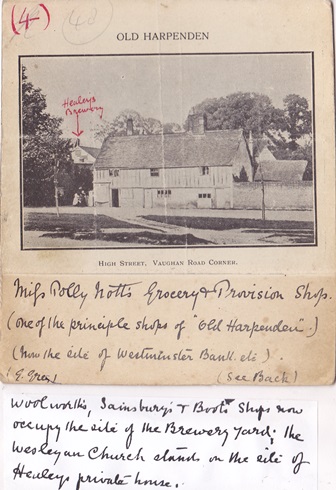 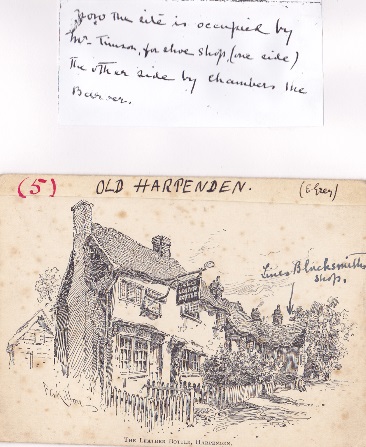 Old Harpenden (5). The Leather Bottle. Edwin's script from the reverse is shown above the sketch
LHS Archives - LHS 16253 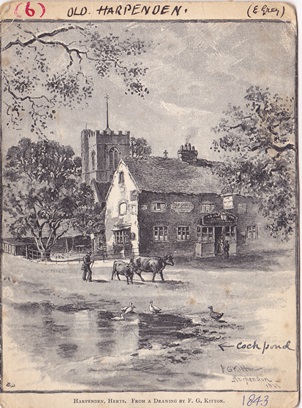 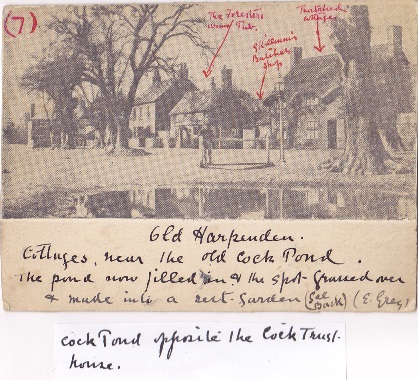 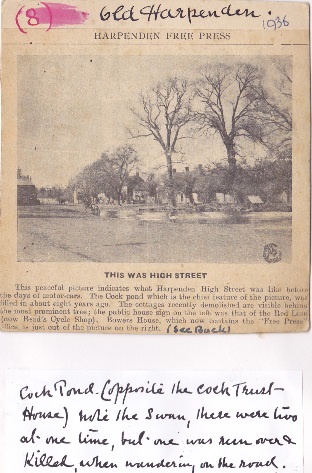 Old Harpenden (8). The High Street. Edwin's script from the reverse is shown below the image
LHS Archives - LHS 16255 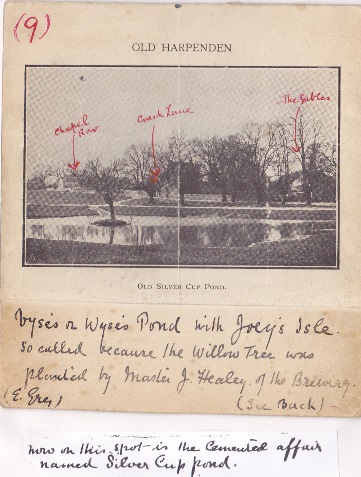 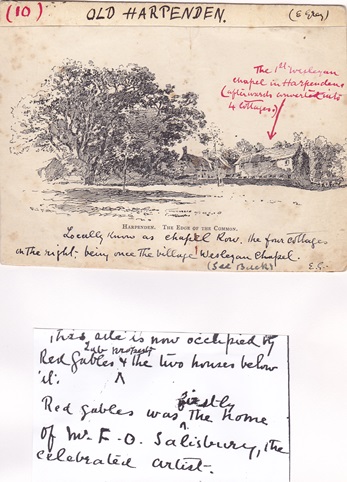 Old Harpenden (10). The Edge of The Common. Edwin's script from the reverse is shown below the sketch
LHS Archives - LHS 16256 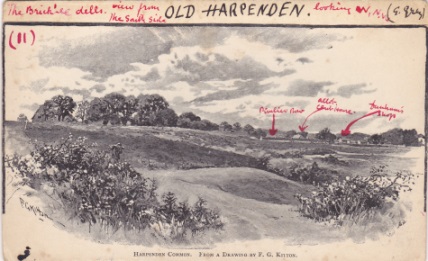 Old Harpenden (11). Harpenden Common. Edwin wrote on the reverse "View looking from the south side of the Brick'ill dells"
LHS Archives LHS 16257 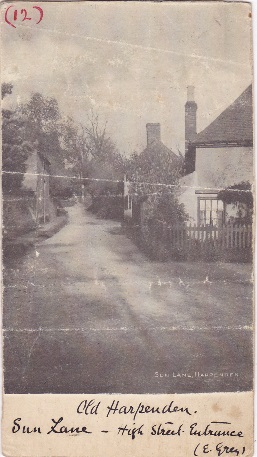