MP and Baron Hill of Luton 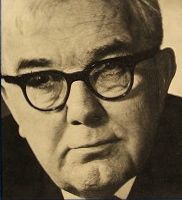 Charles Hill (1904-1989) studied medicine at Cambridge and London, gaining the degree of MD.  He was Deputy Medical Officer of Oxford in 1930 and later Secretary of the British Medical Association from 1944 to 1950.

During the second world war the Ministry of Health wanted to broadcast messages in the most effective way possible, and Charles Hill became the “Radio Doctor’, part of the radio programme ‘Kitchen Front’ broadcast every morning.  He broadcast advice, using clear everyday language, on wartime diet and on how to stay healthy, and became a household name.

He was still BMA Secretary when the National Health Service was introduced in 1948, and he negotiated with Aneurin Bevan to ensure a more independent role for GPs.

He became MP for Luton in 1950 as a Conservative and National Liberal, and held the seat until 1963.  He moved to Harpenden at this time, living in Milton Road.  He became Parliamentary Secretary to the Ministry of Food in 1951, Postmaster-General in 1955 and Chancellor of the Duchy of Lancaster from 1957-1961.

He was appointed Chairman of the Independent Television Authority in 1963 and was also created a life peer as ‘Baron Hill of Luton’.  Although he had been hostile to the BBC during his time as Chairman of ITV, he was surprisingly appointed by Harold Wilson to be Chairman of the BBC Governors.  He retired from the BBC in 1972.

He married Marion Spencer Wallace and had two sons and three daughters.