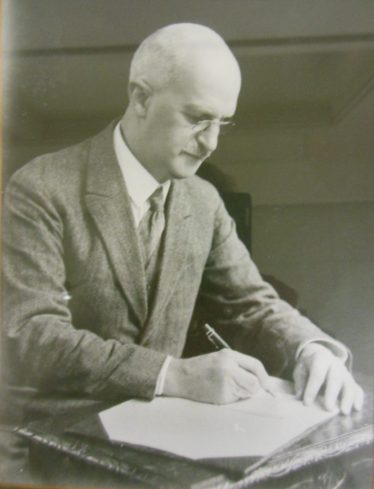 Edward Charles Davenport was born in 1871, the youngest son of the Rector of Wellford-on-Avon. After school in Stratford-on-Avon he started his training at the London Hospital in 1891 and obtained MB (Lond.), MRCS (Eng.) and LRCP (Lond.). After holding various hospital appointments and embarking on a voyage as a ship’s doctor, he took a locum job in Fu Chow, China, where he met and married Ida Chambers, who was at that time nursing in the Church of England Zenana Mission Hospital.

In 1902 Dr Davenport took over a practice in Canton and was the Medical Officer of Health to H.M. Consulate in Canton and to the Chinese Imperial Customs. His two children were born in Canton: his son, Surgeon Commander James Edward (Pat) Davenport RN was serving in Australia at the time of his father’s death. His daughter Helen married Ralph Washington Gray in Harpenden, but had died in 1951.

From China to Harpenden

In 1915 Dr Davenport gave up his practice in Canton in order to return to England to do war work and he gave his services to the London Hospital for the remainder of WWI. During this time his family was living in Harpenden, and after the war he took over the practice of Dr W H Blake, basing his surgery at Borodale, Kirkwick Avenue. He soon endeared himself to his patients in Harpenden by his painstaking attention to detail and by his care and consideration for all, particularly for those on his ‘panel’. He was a keen supporter of the scheme for the establishment of a hospital in the Red House, when this was given by Sir Halley Stewart for use for this purpose. He was involved from the inception, and opening of the hospital and afterwards in his professional capacity until his retirement in 1945.

Partnership with Dr Hester – and the tough war years

He was joined in his partnership by Dr K H C Hester in 1937, and had intended to retire when he was 70 in 1941. However by then WWII had begun and he continued to practice with the assistance of Dr Williamson while Dr Hester served with the Royal Army Medical Corps from 1942-46, and then of Dr T E Whitby who joined the practice on demobilisation from the RAF. The war years were probably the hardest of his career, as he visited his patients in the black-out and during the hard winters.

Dr Davenport was always interested in local sport, especially cricket. For many years he served on the committee and was at one time President of Harpenden Cricket Club. In 1952 he was made an honorary life Vice-President of Hertfordshire County Cricket Club. He was also a very good croquet player and for several years running he fought out the finals of the singles with Mr Henry Mardall at the Harpenden Lawn Tennis and Croquet Club.

As a keen Freemason, Dr Davenport was Past Master of the London Hospital Lodge and later of Harpenden Lodge.