Dr Blake arrived in Harpenden in 1879, which was soon after he graduated. He obtained his M.R.C.S. in 1876 and graduated at London University in 1878 with an honours M.B., B.S. During his medical career he was Hon Medical Officer at St Albans Hospital and Dispensary; Medical Officer for the Third District of the St Albans Union, and house physician and obstetric assistant at U.C.H. where he trained. Dr Blake came from Hampshire and in 1879 married Miss Elizabeth Alice Twynam. They had a family of five boys and four girls.

Leyton House, with surgery – detail from a postcard, c.1910 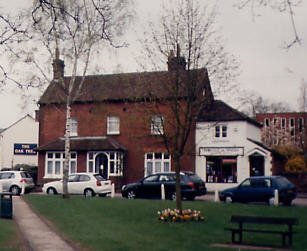 At first they lived in one of a pair of semi-detached cottages with long front gardens on Church Green. Then they moved to Leyton House (the house on the corner of Amenbury Lane) and the doctor had a surgery in the room at the side of the house (Later Mr Smith’s, optometrist; followed by a dental practice).

From there they went to Bowers House, as tenants, presumably after the death of Dr Spackman in 1892. Dr Blake did not visit many of his patients in their homes, but sometimes went as far as Redbourn and Wheathampstead. He used to drive himself about in a pony trap or for longer journeys would take the high dog cart and be driven by the coachman. He did not have a motor car. His daughter said he was not the least bit mechanically minded and would not have been able to cope with one; in any case he was too fond of his horses and hated changes. He was very conservative and would not have electricity installed in the house, so the family had to continue to use the oil lamps and the gas lights in the passages.

Alterations to the house 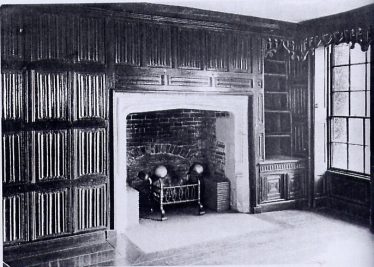 Dining room panelling and fireplace, replaced a Victorian grate – Reproduced from Ralph Webster: It Started with a Green Line Bus

The dining room at this time had a Victorian grate but Dr Blake was persuaded to have it removed and replaced with one in keeping with the period of the house, one similar to those of Rothamsted, (where the Great Drawing Room was being remodelled using panelling and fireplaces from other buildings). This Tudor-style stone fireplace was made by “Charlie” Lines. Later, after the doctor’s death, the panelling was sold, together with the fireplace and grate.

In 1912, after having been in the possession of the Lords of the Manor for nearly three centuries, Bowers House was sold to Dr Blake.

Sometimes when he went to Redbourn to visit a patient, and then on to Wheathampstead, Mrs Blake would pack up some food and walk to the top of the common to meet her husband on his way back from Redbourn and they would have a picnic together before he went on to Wheathampstead. Like the Spackmans, they give the impression of a united and happy family, fully integrated with the activities in the village.

There is a short description in the parish magazine of 1908 of a sale of needlework, vegetables, fruit etc. held at Bowers House to raise funds for the support of the orphans in St Margaret’s Home. Harpenden String Band played during the sale and other attractions included swings and a fish pond, and penny rides were given up the common in Mrs Wellington’s motor car. Altogether £13 was realized.

As well as in its people, Dr Blake was interested in Harpenden as a place and wrote in 1919* a number of articles for the local newspaper, describing the village as it was when he first arrived there, forty years previously.

It was said of him that he never sought popularity, but he grew to be greatly respected and appreciated. He was full of humour and treated his patients with funny stories as well as with medicine. His children seem to have inherited his sense of fun because in a cupboard, in a small room that opened on to the stable yard, there lived a skeleton, a relic no doubt from the doctor’s student days. The Blake children used it to play jokes on their friends, and on more than one occasion it was seen astride a bicycle going for an airing along the High Street.

Dr Blake was retired by 1920 and the practice was taken over by Dr Fraser, then by Dr Ross. Mrs Blake died in 1925 with the reputation of being one of the most well-read women in Harpenden. Those of the Blakes who were still at home remained at Bowers until 1933.

One Sunday Dr Blake, who was then 80 years old and had a stiff leg, was walking across the High Street on his way to church when he was knocked down by a motor car, one of the first pedestrian victims of a traffic accident in Harpenden (**see below). When Marcus Blake, one of the sons who was a purser on board a liner, heard of his father’s accident, he had a heart attack and died on the spot. Although Dr Blake did not die immediately the accident proved fatal. There was just one daughter, Molly, left at Bowers, and not long after the house was sold.

Theodora Wilson’s references to Dr Blake and ‘his innumerable family’ are sparse, compared with her close involvement with Dr Spackman and his family. However, she described Dr Blake’s tragic death: “He was old and infirm but a constant attendant at the Parish church. He was crossing the high road and swerved to avoid a motor – but unfortunately the wrong way. He was knocked down and carried home unconscious. He lingered more than a month but never regained consciousness.” (Theodora’s Journals, p.228-9)

* Harpenden in 1879 by Dr W H Blake was published by Harpenden & District Local History Society as a monograph, with an introduction by Eric Brandreth, in 2005.

** Dr Blake’s accident was reported in detail in the local press:

“Dr Blake had been confined to bed since meeting with an accident on the morning of Sunday, August 6, and in the circumstances an inquest was necessary, and this was fully reported in the ‘Pictorial’.

“The principal witness was the motorist concerned in the accident, Miss Rosemary Warren, of Old Pastures, Redbourn, who said she was driving an MG Midget car and was accompanied by two small children. She was about 100 yards from him when she saw him, and he was then on the edge of the road, just starting to cross. There was no other vehicle on the road. She was travelling at 20-25 mph on her nearside of the road, and sounded her horn. Dr Blake looked both ways and started to cross the road. When he got into the middle of the road he looked to his left again and then stopped. Witness was then only a few yards away.

“‘I was pulling slightly to the outside to pass behind him,’ said Miss Warren, ‘but he stepped backward as though hesitating. He went backwards about two feet, and then fell backwards. He was not struck by the car before he fell. He fell onto his back on the ground when the nearside wing of the car struck his head.’ She stopped two or three yards beyond him, having applied the brakes about ten yards away.

“The jury returned a verdict of ‘Death from Misadventure’, and the Coroner asked ‘Do you find he was struck before he fell or after?’ The foreman, Mr A Dunkley replied: ‘According to the evidence, we think it was after.’

“Deep sympathy with the relatives was expressed by the jury, by Mr Frampton on behalf of Miss Warren, and by Dr Davenport on behalf of the medical practitioners and everyone in Harpenden who had reason to be grateful to Dr Blake.”

Dr Blake was buried on 11 October 1933. There were 57 floral tributes, and the report lists the many residents present – in itself an insight into Harpenden society of the time, from the Anscombes to the Wilsons. (LHS archives: LAF People – Blake)