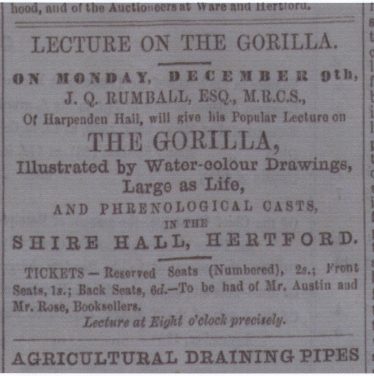 zoom
Adertisement for a lecture by J Q Rumball in The Hertford Mercury & Recorder, Saturday, 23 November 1861

James Quilter Rumball (1795-1872), a member of the Royal College of Surgeons, was described in a newspaper article of 1841 as ‘a Phrenologist of some celebrity’. Dozens of reports and articles on his lectures appear in those newspapers already scanned for the British Newspaper Archive. He was a leading proponent of phrenology, lectured widely, and was presented with a massive silver inkstand by the Colchester Phrenological Society as a token of their appreciation. He was also strongly opposed to mesmerism and lectured widely against it. Reports of his lectures in the 1830s and early 1840s are similar in number to the auction notices placed in newspapers by his brother John Horner Rumball, Surveyor and Auctioneer of St Albans and Mayor of the same in 1840 and 1846.

His father had run an asylum in St Stephen’s, St Albans since 1812. It was moved to Oster Hills in St Michael’s in 1834.

In 1843 he submitted a pamphlet entitled ‘A letter to the Lord Chancellor upon insanity, occasioned by the case of M’Naughten’ in which he proposed legislation based on his phrenology-based theories of the causes and treatment of insanity. Samples of the resulting controversy may be read  in www.books.google.com/advanced_book_search using the criteria Rumball and MNaughten in the full view option.

The medical establishment was highly critical of his opinions in particular and of phrenology in general;  ‘the rumble of his chariot-wheels’ as one critic put it.

From 1847 to 1864 the annual renewal of a licence for an asylum for the receipt of insane persons at Harpenden was granted to Arthur Griffin Rumball (one of James’s sons) as proprietor of the asylum at Harpenden Hall and to James as medical attendant to the asylum.

A newspaper report of 1864 gives James’s address as ‘The Limes’, Harpenden. Research by Geoff Woodward identifies it as the building at 69 High Street, Harpenden. James was declared bankrupt twice, in 1833 and again in 1864, which may explain why the licences were issued to Arthur alone from 1865.

According to a notice in the Morning Post of 10 June 1872 James died on the fourth of that month at ‘The Limes’, Harpenden aged 77.

This article was first published in Newsletter 117, September 2012