A Harpenden Dentist for 20 years

We received an enquiry from John Langham asking for the whereabouts of Chilworth, Hollybush Lane, Harpenden, his great grandfather’s house and  was it still there? 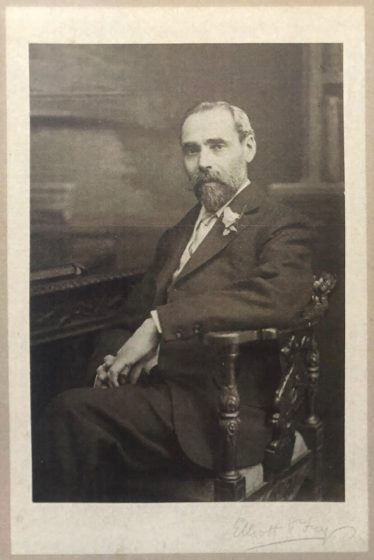 He has a 1913 postcard addressed to his great grandparents at that address. 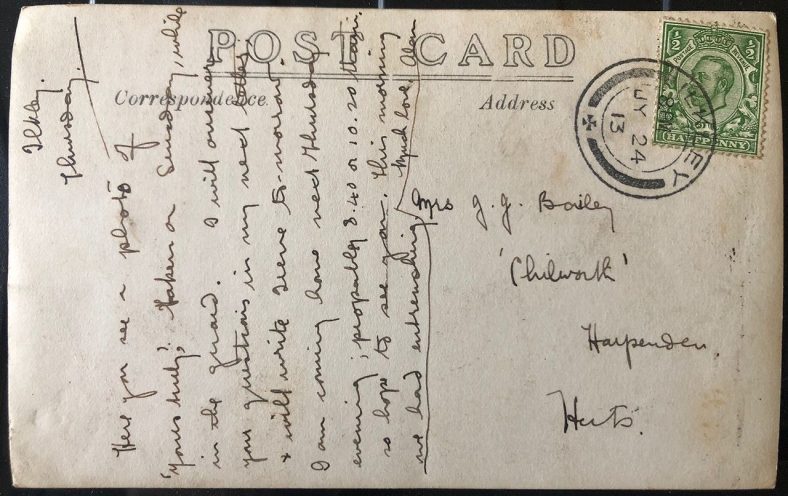 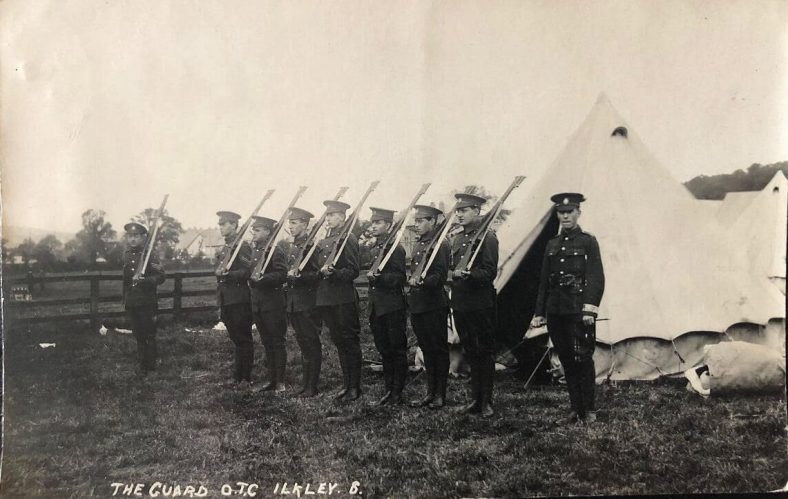 The photo on the front of the postcard with Alan Bailey third from the right, on training in Ilkley(?). Credit: John Langham

This alerted us to the fact that John James Bailey was a dentist in Harpenden and various sources indicate he was here from 1902 until at least 1926.  He is also recorded in St Albans Kelly’s directories* for a few years so he probably ran surgeries in both places.  However he is on Harpenden’s electoral registers and was still in Harpenden after 1922, but not on the Kelly’s commercial list.  Another dentist, Maurice Harold Waring, was in residence at the St Albans address so had Bailey retired? – he would have been over 65. His name  does not disappear from the Kelly’s  Harpenden private list until the 1927/8 edition.

From the census records, John James was born in 1855 in Longton, Staffordshire and his father John, was a schoolmaster. He moved with his parents to at least Halifax and Newcastle-under-Lyme but by 1881 he was a dental student boarding in Marylebone. However from the 1925 Dentist’s Directory he was practising in 1878; registered later that year and obtained his LDS and RCS Edin in 1881.  Note the Dental Act was passed in 1878 hence his registration that year, and presumably at the time of the 1881 census had not yet received his LDS and RCS so considered himself still a student.

John James married Emma Unwin the daughter of George Unwin of the well known printing firm of Unwin Brothers on 12th June 1889,  at Tangley District Congregational Church, Surrey, with the wedding breakfast at Chilworth. They had two children, Alan who sent the postcard and Irene who Alan mentions in his message. The village of Chilworth, Surrey was Emma’s childhood home.

Although Alan had only recently been born, John James and Emma took an extended holiday at the end of 1895, for John James sent a letter to Irene in November from Avignon, and another in December from a steamer on the Nile. He mentions seeing her after Christmas. 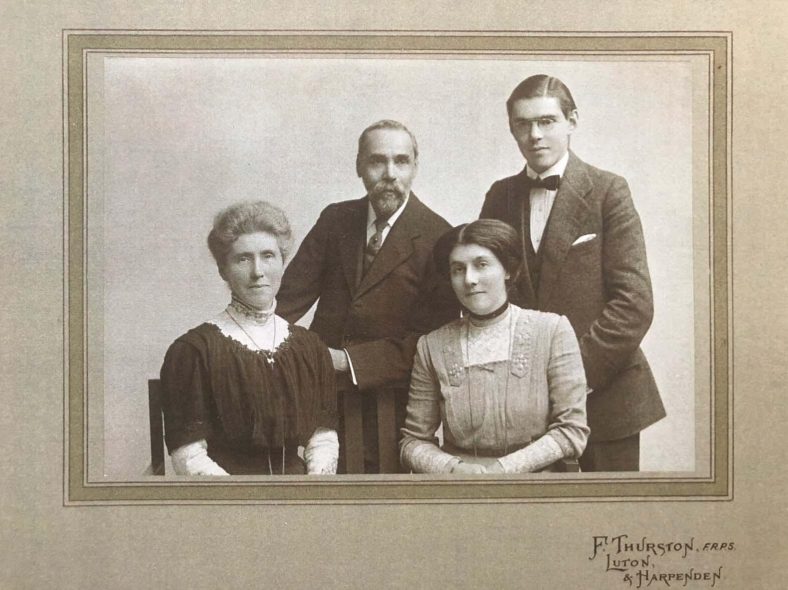 Note this photograph was taken by Thurston of Harpenden 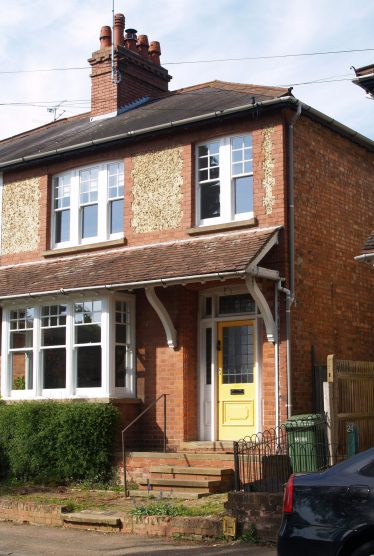 John James Bailey was in Hertfordshire in 1899 when he was recorded in the UK, City & Counties Directory as being at Knebworth Station and with LDS after his name but, strangely in the 1901 census he is in Woking with his family at his parents-in- law’s and as a motor mechanic!  In fact in the family archives there is a letter of reference from the manager at The Motor Mills, Coventry, dated 1900 certifying that John James ‘has been at the Mills for some months’, and states that ‘he is well up on Mechanical Engineering, able to be entrusted to repair or even construct any light car. He is a sterling character, upright to the highest degree, and thoroughly conscientious’. It is not know why he was trying the motor trade (just interested in motoring?) but he did continue with his dentistry for in 1902 he is in Harpenden at Westwick in Wordsworth Road (this became number 26) as a dentist.  He then moved to Hollybush Lane to ‘Chilworth’ which became number 22 and then to Clarence Road, taking the house name with him, and that became number 19. 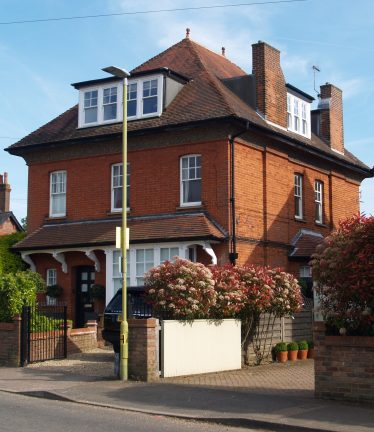 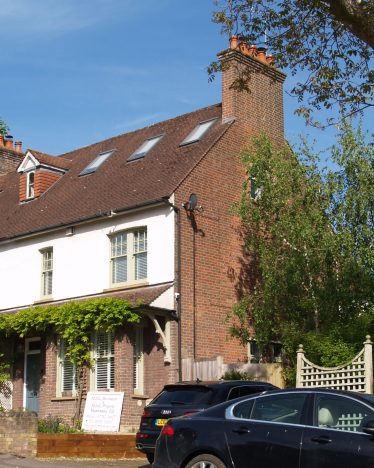 From Harpenden John James and Emma moved to Northwood where they stayed until their deaths in 1941 and 1949 respectively.

Alan was John Langham’s maternal grandfather and was awarded an MC during WW1.

Theodora Wilson mentions John James Bailey in her journal:
“The League of Nations has been hampered by the refusal of America to join in…But as far as local interest goes we in Harpenden have at last risen to the enterprise and started an enthusiastic branch of the League of Nations Union.  The project started with the amalgamation of a small private committee led by Dr Bailey, the dentist, and another small study circle led by Mr. and Mrs. Seebohm – pleasant and interesting Quakers….”

He checked  the First World War records they have and and there is one reference to J J Bailey:

‘On 17 March 1916 he appealed to the St Albans City Military Service Tribunal for delay in call-up for an apprentice, Evan Idrisyn Morgan. The residence of the latter is shown as 69 Pageant Road, just to the east of Holywell Hill. Morgan had previously attested under the Lord Derby Scheme that he would join up when called. At the hearing Bailey was seeking a postponement as he (Bailey) needed Morgan for some war work but, mostly, for general business. Unsurprisingly, his application was refused so Morgan had to join up immediately (within 2 months).

The source for this is the report in the Herts Advertiser, 25/3/1916 pg. 2 and Jon suggests that perhaps Bailey was treating some of the thousands of soldiers based in the city.

* In the 1906 issue he is in the commercial list as being at the Peahen Buildings, London Road and in 1907 until  1914, or possibly later, in both the private and commercial lists as at ‘Crooksbury’, 36 Beaconsfield Road.  Did he have a partner/assistant living there?  By 1922 Maurice Harold Waring, also a dental surgeon, was in ‘Crooksbury’