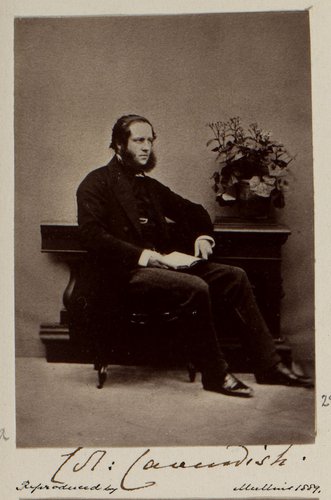 During research for the ‘Harpenden Chapel’ article (see Newsletter 136, December 2018) I noted that the Harpenden Tithe Awards, published in 1842, showed that Harpenden Hall was then occupied by a Mr Frederick Cavendish. The property had previously been the site of the Rev. Maurice Phillips’ school, the lease of which ran out at Michaelmas 1839 (29 September). Solomon Leonard, who had taken over the lease after Phillips died, vacated the premises thus closing the school and the chapel in the grounds. The closure of the chapel led to the construction of the Independent Chapel in Amenbury Lane. 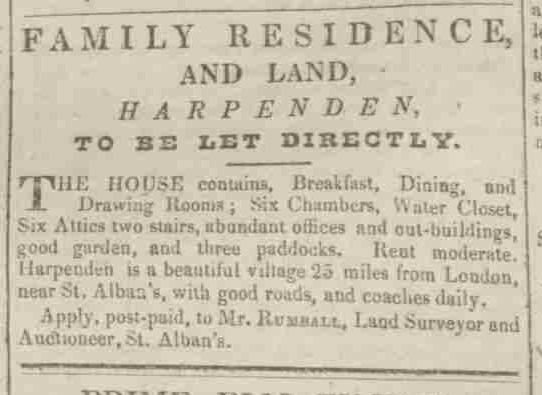 A tenant was found; from the Tithe Awards and other evidence we know that Frederick Cavendish occupied the property from sometime after the date of the advertisement and brought in a fine selection of household furniture and other goods. We know this because he left the property in May 1840 and put the valuable items up for auction. 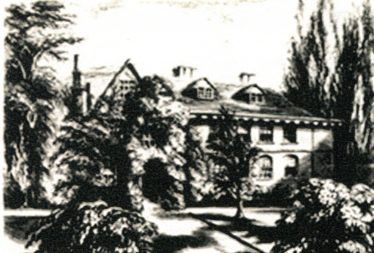 The attic windows may be seen today. ‘Mr Rumball’ was John Horner Rumball, a brother of James Quilter Rumball who opened an asylum in this property several years later

The newspaper advertisement reproduced below shows that the property was back on the market in May 1840 as the ‘highly respectable gentleman’ tenant is leaving. There was no new tenant for some time; the tenant’s furniture and other items remained there until the auction in August. 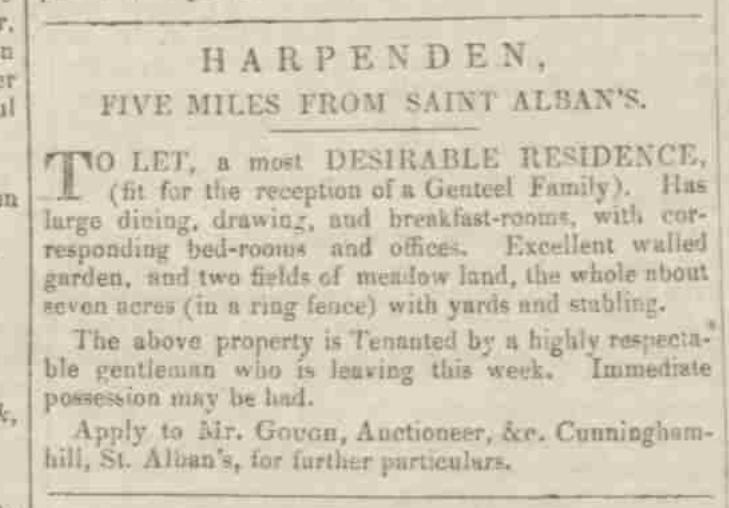 Extgract from Hertfordshire Mercury and Reformer, 9 May 1840, p.3 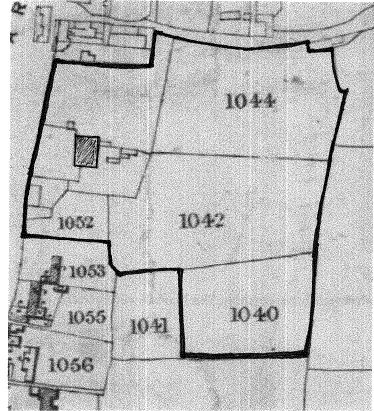 The auction notice (see below) names the tenant as ‘W H F Cavendish’. Also the Tithe Awards, which were being compiled at this time were not amended as there was probably no new tenant before final publication. 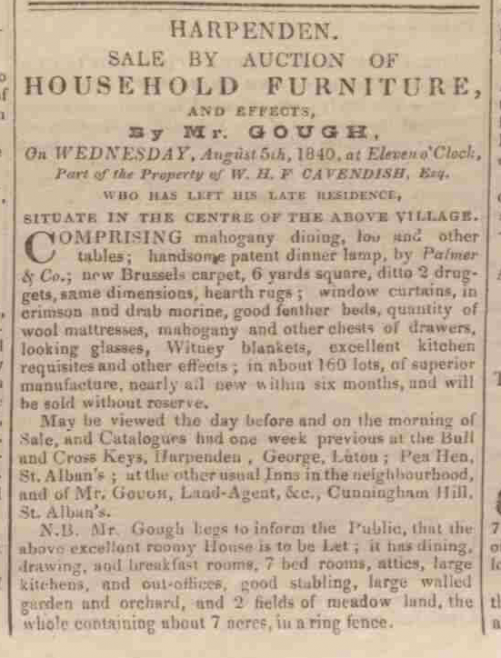 was a grandson of George Cavendish, the third son of William Cavendish, 4th Duke of Devonshire. His parents were Henry Frederick Compton Cavendish and Sarah (née Fawkener), his first wife. An eligible bachelor indeed!

In 1835 he purchased a commission as an Ensign in the 52nd Regiment of Foot, a light infantry regiment also known as The Oxfordshire Regiment. In May 1838, at the age of 21, he was appointed as one of the aides-de-camp to John Lambton, Earl of Durham who was the newly appointed Governor-General of Canada. Durham’s short-lived governorship (of which more later) ended on Durham’s return in November 1838.

Cavendish probably went to Canada with Durham but I have not found any positive evidence either way. He purchased a Lieutenant’s commission in the 52nd Foot in May 1839 but is known to have resigned his commission early in 1840 although no record of the sale of his commission has been found. He would certainly have met Durham and Durham’s family – see below.

Why did he leave Harpenden and resign his commission?

The answer may lie in his subsequent movements and a romantic interest in the north of England. In late April 1840 newspapers carried reports of his appointment as a Cornet in the Yorkshire Hussars (West Riding). The date coincides closely with his resignation from the regular Army and the abrupt departure from Harpenden Hall noted above. As the appointment was in a militia unit, it was granted by the Lord Lieutenant of the County and not the War Office. He attended the Yorkshire Hussars’ annual ball later in the year.

In August 1843 he married Emily Augusta, daughter of the above mentioned (but by then deceased) John Lambton, Earl of Durham. Following the marriage ‘the happy couple left in a post chariot with four horses for Codicote Lodge near Welwyn’ (Morning Post, 21 August 1843)

Despite this interest in the North of England, the 1841 Census places him in Codicote in July. At some time after September 1841 he became the tenant of Codicote Lodge when Francis Sapte, the previous tenant, left the premises. He lived there for many years and became a Magistrate for Hertfordshire. 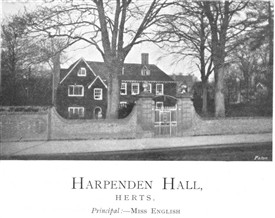 The question remains as to why he chose Codicote, all of nine miles from Harpenden as the crow flies, rather that return to Harpenden. Selling off the furnishings at Harpenden, most of which were new according to the auction notice, and then having to furnish Codicote Lodge soon afterwards seems extravagant even for a member of the extended Cavendish family. It is possible that the auction did not take place and the goods were removed, but this seems unlikely.

The mobility required of many in military or other government service led to a preference for rented property. Also the costs of maintenance fell upon the owner as the tenant moved elsewhere. Perhaps he just preferred Codicote Lodge to Harpenden Hall!

Lambton Inherited a large estate sited over a huge coal deposit. MP for the County of Durham 1813-1828. Created Baron Durham of Durham in 1828 and Lord Privy Seal in 1830. He was one of the creators of the Bill that became the Reform Act of 1832; earning him the nickname of ‘Radical Jack’. Created Earl of Durham in 1833 and served as Ambassador to Russia 1835-1837. Appointed High Commissioner and Governor-General of Canada, arriving there in May 1838.

He was sent to Canada following the Papineau/Mackenzie rebellions of 1837 in Upper and Lower Canada. He soon fell out with the government in London due to his leniency in dealing with the rebels and returned home in December 1838. His subsequent report proposing that the colonies run their own internal affairs to prevent them going the way of the former American colonies was seen as near heresy at the time but later became official policy.

Lambton was also referred to in some quarters as ‘Jog-along Jack’ as it was his view (no doubt in jest) that, when asked in 1821 what was a suitable income required for a gentleman, replied that “a man might jog along comfortably enough on £40,000 a year”.
John Wassell

Not all the references on which this article is based are quoted here. Please refer to the Editor for further information.