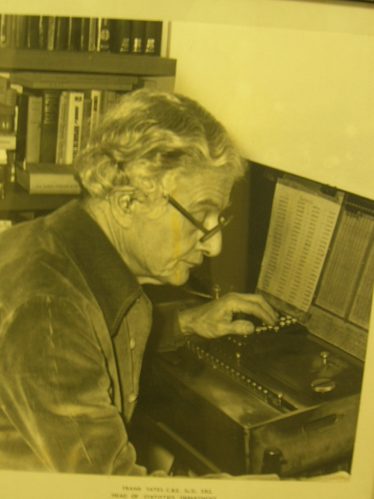 Most scientists only know of Frank Yates as the author of Yates’ Correction, required when testing two proportions for independence.  But he was responsible for many remarkable achievements in his long career, including sixty years at Rothamsted.  He helped Ronald Fisher establish the principles of the design of experiments, he greatly assisted the RAF in the Second World War, he persuaded the government to conduct cheaper but accurate sample surveys rather than expensive censuses, and he inaugurated the era of statistical computing.  Publishing a large number of influential papers and books, he served on many important committees, and became president of several learned societies.

Appointed deputy statistitian to Fisher in 1931

Educated at Clifton School and Cambridge, Frank Yates showed early interest in mathematics and problem solving.  After a brief spell of teaching his early career was spent as a surveyor in the Gold Coast, where he learnt about the theory of Least Squares, used to reconcile different measurements encountered in land surveys.  These computational skills were of great value when he was appointed to Rothamsted as deputy statistician to Ronald Fisher in 1931.  Fisher had exceptional geometrical insights, while Yates was able to express these in algebraic and computational terms, and they collaborated on many important projects in experimental design and statistical modelling.  The first edition of their Statistical Tables appeared in 1938 and is still widely used.  Yates took over as Head of Statistics when Fisher left Rothamsted in 1933 to become Professor at University College, London.  Fisher continued living in Harpenden and called in at Rothamsted frequently, and moved his department there during the war when his college department was bombed.

The work for which he is most widely known was for him a minor problem, a correction to the standard test for comparing two proportions known as the chi-squared test, which was liable to record too many ‘significant’ differences without the famous Yates’ Correction.

In the 1930s Yates began to build up the strength of his department, recruiting W.G. Cochran, David Finney and Oscar Kempthorne, all later internationally famous statisticians, promoting the new ideas about the design of experiments in many fields of research beyond agriculture, and the need for statistically valid sample surveys.  When war broke out Yates was asked by the RAF to advise on the effectiveness of its bombing strategy, and was appointed an honorary wing commander, dividing his time between public work at Rothamsted and secret assignments for the RAF.  One problem was to determine whether the V1 flying bombs aimed at London in 1944 were targeted or merely random over a wide area.  Meanwhile there was an urgent need to improve home agricultural production, and Yates argued for setting up nationwide surveys to measure fertiliser practise and the distribution of agricultural pests and diseases. 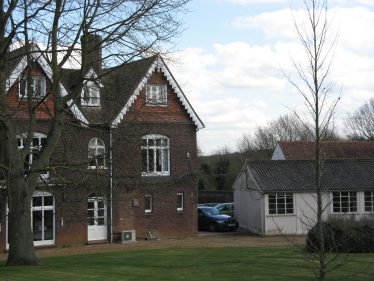 After 1945 Yates developed his department as a statistical research service for all the agricultural institutes in Britain and the ministry experimental farms.  The department moved into Rivers Lodge, occupying all the available rooms with statisticians and assistants using desk calculators.  A Hollerith Tabulator and Card Sorter were acquired to handle the survey work.  In 1946 Yates travelled to India to advise on censuses and surveys for the new UN Population Commission, working with P.C. Mahalanobis, the leading Indian statistician.  Following this he wrote his classic book on statistical methods for census and surveys.

The first computer at Rothamsted

By 1953 the need for new resources to handle the growing demand for statistical analyses led Yates to look for help from the infant computing industry, and the opportunity arose to acquire the Elliott 401, the redundant prototype computer built by Elliot Brothers and standing unused in a warehouse in Cambridge.  This machine is described in another article.   Under his leadership new statistical methods were developed exploiting the capabilities of computers, and helped to found the British Computer Society and become its first president in 1960.  He was elected F.R.S. in 1948 and also served as president of the Royal Statistical Society and the Biometrics Society. He expanded the staff further to write the statistical software, to prepare data and operate the computer to provide a service to a wide range of organisations beyond Rothamsted.  These included all the agricultural institutes in Great Britain, and particular projects from university departments, from developing countries, and some medical and biological organisations.

By the time he retired in 1968, to be succeeded by Dr John Nelder, the department had a faster and more powerful computer, the Ferranti Orion, and was beginning to look for a third.  In retirement he stayed on at Rothamsted, working on a general program for surveys, and continuing to write and promote his ideas. He continued to be consulted by government advisors such as Lord Zuckerman, with whom he had worked during the war, and worked on problems such as the advisability of culling badgers to reduce TB in cattle. 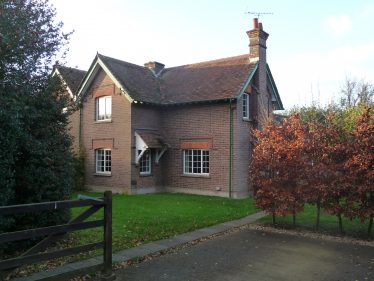 He lived at Stackyard Cottage close to Rothamsted Manor, but had also a home at Whipsnade Zoo designed by Lubetkin, the famous architect of the London Penguin Pool.  A keen mountaineer in his youth, an early student exploit was to climb the chapel tower of St John’s College, Cambridge.