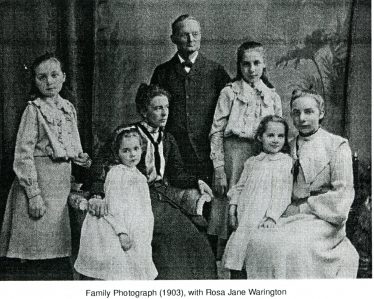 The Warington family in 1903 – the five girls with their father and step-mother. * – Crfedit: Warington-Wickham family archives

Katherine Warington was born in Harpenden on 5 September 1897, a twin and one of the five daughters of Helen Louisa Makins and the agricultural chemist Robert Warington FRS (Jnr). Her mother died when the twins were a year old, so they were sent to to live with their mother’s sister Gertrude and her husband the Revd Charles Longland, vicar of Radley near Oxford. When their father married one of Dr Spackman’s daughters, Rosa Jane, in 1902, the twins returned to the family home, High Bank (14) Milton Road. However in 1907 Robert Warington died of cancer, and the five sisters kept Rosa Jane company until her death in 1923. 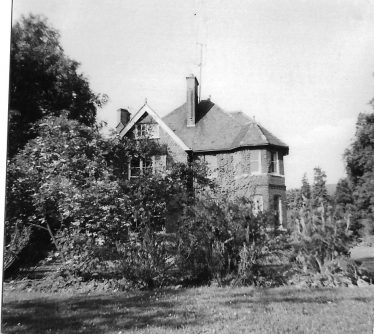 In 1909 Katherine, known as Kitty in family, and her sister Helen joined their older sisters at boarding school – St Ann’s School, Abbotts Bromley in Staffordshire. They were both good at games, Kitty being captain of the school cricket XI and a good tennis player. She went on to the all-women Holloway College, University of London graduating with a B.Sc (Hons) in Botany in 1920, and an M.Sc in 1922.

In 1928 she studied spectrographic methods of analysis under Professor Lundegårdh at Experimentalfältet, Stockholm. Her work on boron was the basis for her D.Sc. from the University of London in 1937.

Katherine Warington’s father had worked at Rothamsted Experimental Station. Here she began as a voluntary worker, much like visiting scientists today. On graduation she was then appointed to the Botany Department in 1921, working with Dr. Winifred Brenchley.

Warington’s work with boron came about because an entomologist wanted to find a way of making bean plants distasteful to black fly (Aphis). The botanists were responsible for supplying solutions with a range of concentrations of various elements for water culture solutions. These included several elements, of which boron was one, not previously recognized as plant nutrients. Using the solutions the entomologist found that all his plants died except those given boron.

Warington’s work required meticulous care as she had to maintain a boron free solution as her control throughout the life of the beans. Her test solution concentrations were as low as 5 ppm (parts per million). Everyone coming into the glasshouse had first to wash their hands even if they weren’t going to handle the plants. By 1923 she had published the proof that boron was essential to the healthy growth of broad beans. Dr Hugh Nicol commented “It is not given to everyone to found a minor industry with her first piece of research, yet this, in effect, happened in her case…the agricultural consumption of boron compounds attained considerable dimension”. Warington went on to produce papers on other micronutrients including molybdenum and manganese.

Katherine Warington also worked with Brenchley on the Rothamsted Classical Experiments on Broadbalk (a study of winter wheat which started in 1843) and Park Grass (started 1856), where from 1921 they carried out field surveys of weeds. Warington tested the germination of weed seeds, demonstrating that most species had an optimal germination period during the year. 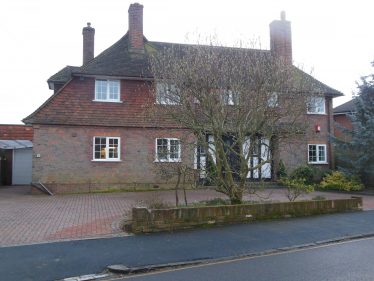 Katherine took an active part in Harpenden life. She continued as a keen tennis player and won the Russell Cup at Rothamsted Tennis Club. She had built a house in Browning Road in 1935 called Visby (no.15) where she lived until 1970, when she moved to 5 Rothamsted Court. She attended St Nicholas Church and on retirement in 1957 she did voluntary clerical work at the St Nicholas’ parish office.

During her last few years she lived in Sandridge House residential home St Albans where she died on 3 July 1993 following a stroke at the age of 95. 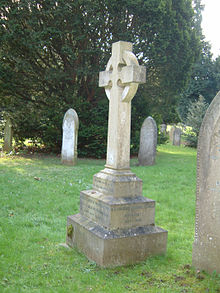 She is buried in the family plot in St Nicholas Churchyard.

*We regret that we have no photo of Katherine later in life, either during her career or her active retirement.

When a name was sought for Harpenden’s fourth secondary school at Batford Farm, Katherine Warington was chosen – as a beacon for women’s education and scientific achievement. The school opened in September 2019.