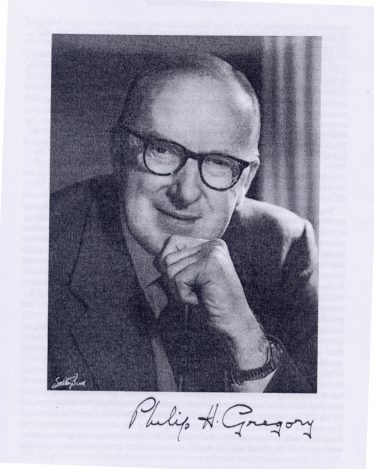 Philip Gregory was a leading expert on fungus diseases of plants, and he had a keen interest in human respiratory diseases caused by fungal spores.  He joined the Plant Pathology Department at Rothamsted in 1938 and became Head of Department in 1958 when Fred Bawden became Director.  He lived in Harpenden until his death, and his wife Margaret lived to be over 100.

Born in Devon, he suffered from asthma as a child, which stimulated his later interest in lung diseases.  From an early interest in biology he came to study botany at Imperial College and gained his Ph.D. for a study of diseases of Narcissus species.  After a brief period working in Winnipeg, Canada on medical fungus diseases he returned to England to study bulb diseases in Devon, where he did much to improve the yields of bulbs and flowers in the South West.  As war loomed the Ministry of Agriculture was concerned for the future of the potato crop, and Philip was directed to join a team at Rothamsted.

Potato virus diseases were a serious problem, and his team established that they were spread by aphids.  It was not possible in a short time to devise effective control procedures, but the early experiments established how the diseases were spread and the best times for planting and manuring.  He was interested in how the severity of the disease varied with distance from the source.  These studies influenced policy and subsequent research in the USA and Europe.

His interest in the spread of spores led to wider research in what became known as ‘aerobiology’, including the study of pollen dispersal, and in environmental health and the spread of atmospheric pollutants.  With the help of wind tunnels and sticky traps, general laws were established which proved extremely helpful in many fields of research.  An important development was the control of Farmer’s Lung Disease, a frequent and series complaint caused by allergy to fungal spores in the field.  In his later career he travelled to West Africa to study and advise cocoa producers on the control of Cocoa Black Pod.

His department included many notable scientists, such as Margaret Holden, a great expert on the mushrooms of Britain (who was consulted by local hospitals when a case of fungus poisoning was suspected), and John Lacey, who continued his research into Farmer’s Lung Disease.  He was president of Hertfordshire Natural History Society and led many fungus forays.  He was always keen to encourage younger scientists, as well as to maintain contacts worldwide with all within his discipline.   He produced nearly 200 papers on all aspects of his work, many in collaboration with junior staff.