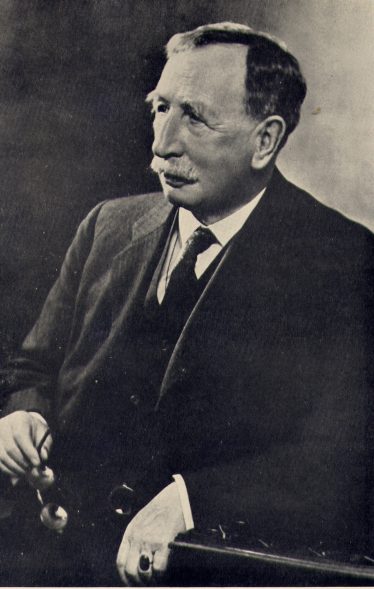 Saving Rothamsted for the Future

After the deaths of Sir John Lawes in 1901 and Sir Henry Gilbert in 1902 Rothamsted was a moribund research institute with a couple of scientists and a few assistants and farm hands.  Lawes had sensibly set up the Lawes Agricultural Trust to ensure that the work of the institute carried on after their deaths, and Daniel Hall was appointed Director.  However the Trust funds were quite inadequate to provide any more than basic maintenance, and so Hall was obliged to go elsewhere to seek funds for the expansion that he believed was desperately required.  Hall moved into the Director’s House in West Common, where Gilbert had lived.  (The present house was rebuilt by Sir John Russell in the 1920s).

In 1902 the view of the Conservative government of the time was that ‘State action should be firmly restricted in favour of the healthy development of private enterprise’, and so there were no state funds for research.  In spite of this Hall was told by the Board of Agriculture that they looked to Rothamsted for scientific information for the needs of the industry.  So he founded the Society for Extending the Rothamsted Experiments, and obtained donations from wealthy magnates and the Goldsmiths’ Company.  He was then able to appoint three scientist including John Russell, his successor in 1912, by which time the scientific staff had risen to seven.

While Lawes and Gilbert had seen the scope of Rothamsted as covering the whole of agriculture, Hall sensibly decided that with the resources available it should confine its activities to the study of plant nutrition and soil science.  Animal nutrition and plant breeding were studied at Cambridge, fruit production at Long Ashton, so Rothamsted became the centre for soils and plant nutrition.

Hall showed an interest in statistical methods, recognising the value of the data collected since 1843, and he corresponded with W.S. Gossett (known as ‘Student’), the well-known Irish agricultural statistician at Guinness.  He laid out a famous uniformity trial, known today as ‘Mercer and Hall’, in which no treatment or variety differences were involved, in order to measure how crop yields vary over space.  His successor, Russell, was to pursue the cause of statistical science in agriculture by appointing R.A. Fisher in 1919.

Hall was appointed to the Development Commission in 1910, and spent the next two years touring the country to observe the current state of agricultural practice.  By 1912 the political climate had changed, and with the threat of war and blockades the government decided that agricultural research needed secure funding.  At this point he decide it was necessary for someone else to run Rothamsted if he was to devote adequate time to the Commission, and John Russell became Director in 1912.

Alfred Daniel Hall was born in Rochdale in 1864, and educated at Manchester Grammar School and Oxford where he studied science.  After graduation he became a science teacher, becoming Senior Science Master at King Edward’s School in Birmingham at the age of 24.  After a period as a university extension lecturer, in 1894 he was appointed Principal of the new Agricultural College at Wye in Kent.  Here he developed the skills needed to combine a scientific career with the administrative qualities needed to provide high quality staff, buildings and equipment for a properly functioning institution.   After serving the Development Commission until 1917 (for which he was knighted in 1918) he worked for the Board of Agriculture until 1927, and finally became Director of the John Innes Horticultural Institution at Merton in Surrey until his retirement in 1939.  He died in 1942.  He wrote numerous books on agriculture, including The Soil (1903) and The Book of the Rothamsted Experiments (1905).