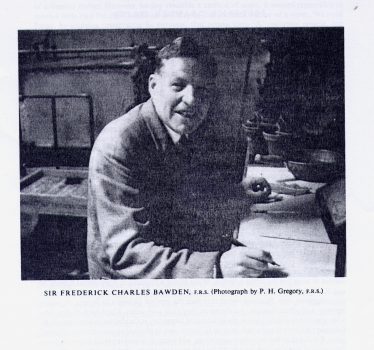 Bawden pioneered research into plant viruses, and later became Director of Rothamsted, and a fierce campaigner for long-term research and the need to eliminate world poverty.

Born in Devon and studying at Cambridge, his first work was with Raphael Salaman at the Potato Virus Research Station in Cambridge.  He moved to Rothamsted in 1936, collaborating for ten years with Norman Pirie.  He became Head of Plant Pathology in 1940, Deputy Director in 1950 and Director in 1958 until his sudden death in 1972.  He served on many national and international bodies, and was knighted in 1967.

His studies of the chemical and structural nature of viruses, and his techniques for purifying virus material led to many breakthroughs in virus research, and eventually to the understanding of the role of DNA and the genetic code.  His staff member, Dr Basil Kassanis was able to use his ideas to eliminate potato mosaic virus from King Edwards, the main UK crop variety, which had become severely infected in the war years.  He later tackled tobacco mosaic virus, and tomato bushy stunt virus, leading to his key work, Plant Viruses and Virus Diseases.  His department also showed how viruses were spread by aphids and other insects.

Director at a difficut time

As Director he encouraged the growth of Rothamsted with enlarged departments, arguing for more resources to tackle a growing number of problems at home and overseas.  He was very sociable and liked to get to know every member of staff.  He read every paper produced by his staff and was meticulous in improving clarity and correcting English.  His last years were a struggle against what he saw was a negative approach by politicians to public science, focussed only on short time and financial considerations.  Citing the long time required to clean up the potato crop, and the development by Mike Elliott of synthetic pyrethroids, he campaigned vigorously against the Rothschild Report of 1971.  The effort was too much for his health.

He married Marjorie Cudmore in 1935, and she campaigned for the Family Planning Association and for developing countries to improve access to family planning.