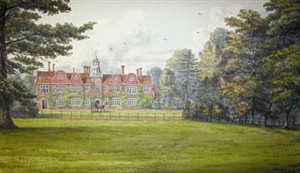 Rothamsted was the home of Sir John Bennet Lawes (1814-1900) a pioneer of science, farming and industry. Sir John’s first act on inheriting Rothamsted was to order one of the best bedrooms to be fitted up as a laboratory (much to his mother’s dismay).

In 1843 he founded the Rothamsted Experimental Station, which now has an international reputation for agricultural research, and launched the first of a series of long-term field experiments, some of which continue today.