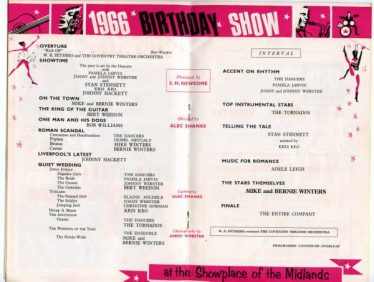 Among the many theatrical personalities who lived in Harpenden in the 1940’s were Alec Shanks and his partner Roy. Regular weekend patrons of the Old Bell, they shared a bungalow at the top of Roundwood Lane. Those were the days when Alan Turing and John Gielgud could be pilloried for inappropriate gender liaisons. Yet the social mores in Harpenden and other places at that time was ‘don’t ask, don’t tell’ and if you avoided the police and behaved yourself that was the end of the matter.

Alec Shanks, better known as a theatrical costumier, had a thriving business in Covent Garden, but he was also under contract to Jack Hilton as producer of the Royal Command Variety Performances, which he did for many years.  He was tall, handsome, with an impressive head of silver hair, and always commanded attention at the bar. Roy was shorter, less obtrusive, picked up the groceries on his way home and was friendly and would share a game of bar billiards.

Once I asked Alec tremulously what was the secret of organising all these famous variety acts at the Palladium before the King and Queen. ‘Keeping ’em down to three minutes’, he replied.