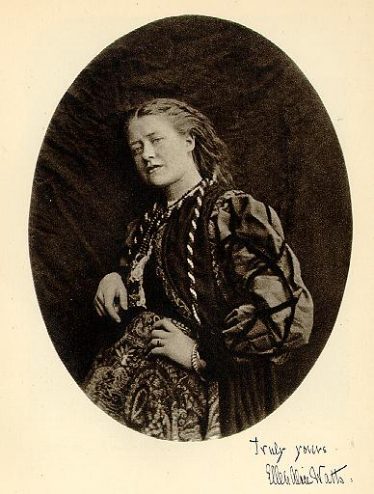 In the article about Harpenden Hall Asylum, entitled ‘Insanity’ ,reference was made to the Harpenden home of James Quilter Rumball called ‘The Limes’. As noted in the article this address became 69 High Street, Harpenden. This address is also mentioned in ‘Ellen Terry: her years in Harpenden’.

In 1867 they eloped to Hertfordshire, first to a cottage on Gustard Wood Common (though Major R G Clutterbuck maintained that they first lived at 69 High Street, Harpenden, later the home of Captain Arthur Lydekker) – ‘they’ being Ellen Watts (née Terry) and Edward Godwin. The cottage is named in some sources as the ‘Red House’ at Gustardwood Common in Wheathampstead parish, which they occupied until the building of their house at Fallows Green** in Harpenden.

As James Quilter Rumball was living at ‘The Limes’ at the time of the elopement in 1868 I wondered if there was any connection between him and the couple.

Why did they come to Harpenden?

I have not found any clues in the available records as to why the couple came to this area but once here a relationship developed between them and the Rumball family. At the latest this may have developed when Ellen became pregnant in 1869 – she notes in her memoirs that her daughter Edith (born on 9 December 1869) was delivered by ‘Dr. Rumball’. Edith herself recalled that one of her first memories was of the elderly Rumball playing the violin. Edith was probably born at Gustardwood but Clutterbuck’s claim may be based in fact – Ellen visiting Rumball during her pregnancy and possibly giving birth at his house.

At the time James Rumball was married to his second wife, Elizabeth, née Bocking. According to the 1871 census she was about 4 years older than his son Arthur, who ran the Asylum in Harpenden. After James’s death in 1872 she became a close companion to Ellen for over 30 years. She was known to all as ‘Boo’ – as baby Edith called her. In 1882 she purchased Harpenden Hall, where her step-son and his medical successors ran an asylum.

As previously noted the reasons for choosing to live in this area are not apparent. Further research may reveal a more convincing reason than that of the proximity of two railway lines to London. Ellen Terry had good reason to be selective in her recollections, even in 1908 when her memoirs were published. She had steered a course through dangerous waters for most of her life.

The failure of her first marriage resulted in a humiliating return to her family with an annual payment of £300 from George Watts. This was given on condition that she both remain chaste and not take up a career on the stage.

Little wonder then that her memoirs of the years with Godwin manage to give the impression that she had separated from Watts and moved to Gustard Wood with the children. Godwin is mentioned a few times (she had met him before she met and married Watts) but not as a partner in elopement.

Ellen returned to the stage separated from her husband and as the mother of two children whose illegitimacy must have been known to some and suspected by many. This adversely affected her social standing. Charles ‘Lewis Carroll’ Dodgson, a friend of the Terry family, had photographed Ellen when she was about 18 (before the elopement) but after her return to the stage would not introduce an unmarried young woman to her without seeking the permission of the mother. Until remarriage she could not be formally received at the house of her sister Katherine who, with her wealthy husband Arthur Lewis, gave lavish entertainment to the ‘society’ of the day. 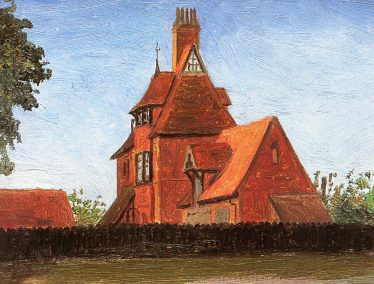 Divorce proceedings between Ellen and George Watts were initiated in 1877. This was a mutually satisfactory action as Ellen and Godwin had separated; the house at Fallows Green was put up for auction on 25 May 1875 (Luton Times & Advertiser, 15 May 1875). She intended to marry the actor Charles Wardell (stage name Charles Kelly) and Godwin wished to marry Beatrice Philip.

* The above photograph of Ellen Terry was taken by Charles Dodgson at her parent’s house in Caversham Road, Kentish Town several months after Ellen had separated from George Watts. Dodgson took a series of photographs of the Terry family there between the 13th and 17th July 1865. This pose in theatrical costume was taken on 14 July 1865. Another photograph of her standing in front of a glazed door was taken the day before.