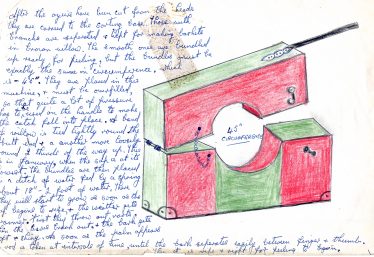 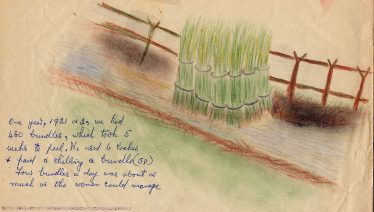 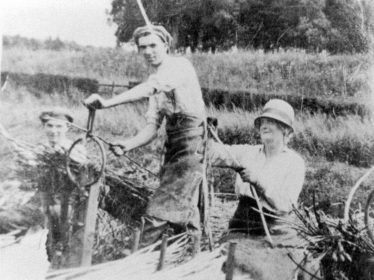 zoom
Herbert Frost and Ruth Frost preparing osiers for basket-making. The osiers are being pulled through an iron 'brake' to strip off the bark
LHS collection - copy of Mrs Nettle's original 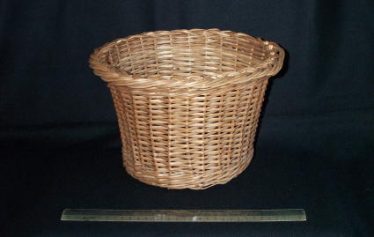 zoom
Wastepaper basket made by Mr Frost in the 1960s 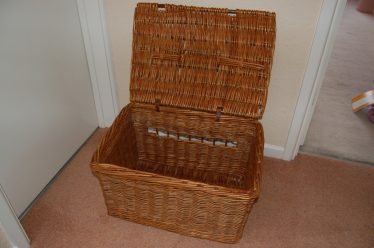 zoom
This cat basket was made by William Frost in about 1962 for History Society members Joyce & Alan Bunting, and is still doing yeoman service nearly 50 years on, transporting their two present cats in commodious comfort.

Wickerwork, the making of baskets and other items from willow (“withies”), rushes and other natural fibres, was known to Neolithic man.  Its importance as a craft was recognised by the establishment of a livery company, the Basket Makers Company in 1569, which finally gained Royal status in 1937 (www.basketmakersco.org).  The growing of willow canes (rods or osiers) was recognised as a crop from 1800 with the industry peaking in the 19th century.

The craft was introduced to Batford by Mr William Frost.  Born at Thetford, Norfolk in 1883, on leaving school he was apprenticed to a basket-maker for 5/- (25p) a week, increasing gradually to 12/- and, after five years he reached the mature status of “journeyman”.  After a spell at Leighton Buzzard, working for a Mr Robinson who supplied as many as 84,000 baskets a year to George Munro of Covent Garden, for packing cucumbers and tomatoes, he moved back to Thetford to take over his former master’s business on a seven acres osier bed, mainly supplying hampers for rabbit catches.

However, in the early 1920’s the Forestry Commission acquired 20,000 acres of land in his area, exterminated the rabbits and planted fir trees.  His livelihood now gone, Mr Frost found some suitable land by the River Lea at Batford and moved his family (wife, two sons and a daughter) here in 1927.

That year on a five acres site to the south of the river and east of Batford Mill (that is, from the Marquis Lane footpath along the valley towards Castle Farm on the right-hand side of the river) he planted 32,000 willow canes (rods or “sets”) but, with a very hard frost in May that year, he lost a lot of his crop and had to replant.  After 2 to 3 years when a “set” had grown enough, it was cut and became an “osier head”, with other canes or “sets” branching out from it.  These shoots or osiers were cut in the winter or early spring (November to April) before the sap rose.  Such osier heads are capable of yielding a crop annually for 20 to 50 years.

The cut osiers were sorted, those with branches being separated and kept for making baskets in brown willow, the smooth ones being bundled ready for peeling.  A band of willow was tied tightly around the butt end of each bundle and another more loosely around two thirds of the way up.  They were then stood in a “peeling drain”, a flowing waterway dug from the river, 18 to 24 inches deep, where they were allowed to shoot and have their catkins, after which they were soaked under water in a long tank for 2-3 days until pliable, then left under a piece of sacking for another day or two, after which they peeled easily (the bark separating easily between finger and thumb).

Peeling was carried out using a “brake” which, however, required the bundles of osiers to be exactly the same in circumference, namely 45 inches!  Even then, when placed in the machine, it had to be overfilled so that quite a lot of pressure was needed on the handle to make the catch fall into place.  Peeling the canes gave a white osier; boiling before peeling gave a buff osier whilst, with the peel left on a brown osier resulted.

In this work Mr Frost was assisted by his family and hired female help.  One year his daughter recorded that they had 480 bundles to strip.  This took five weeks using four brakes, four bundles a day being about all that a female worker could manage and for which she received 1/- (5p) a bundle.

Mr Frost supplied baskets for watercress (grown locally), for bakers (eg Ackroyds of Batford), fishmongers and greengrocers, steak trays for butchers, peckcobs and bushel skeps for stables and skeps for coalmen as well as hurdles for fencing, lawn screens and garden furniture, cradles, baby baskets and even a jackdaw’s cage!

He continued his craft until late 1950’s (when locally grown watercress ceased), following which the beds were uprooted and the land used for market-gardening.  Some of his willow trees still stand by the river.  He died in the late 1960’s.