A talk given by Oliver Randall to the Society on 25 September 2012. 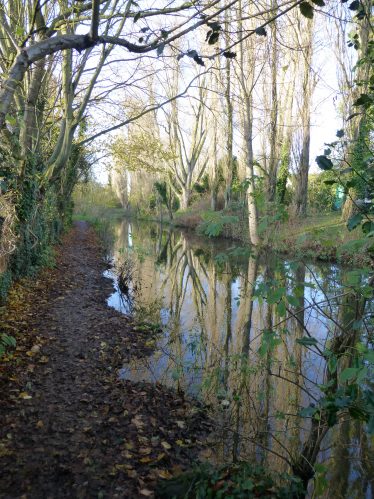 Mr. Randall commenced by asking the question ‘when was the first nature reserve in the UK opened?’ Dates as far back as 1856 were proposed but the answer is 1912. Charles Rothschild, a noted entomologist and founder of The Wildlife Trust, bought 50 acres of fenland and turned it into a nature reserve.

The Reserve at Batford Springs is now 17 years old. It lies within Harpenden and consists of some 12 acres beside the River Lea, surrounded by housing and an industrial estate. The river itself is not part of the Reserve.

Batford Mill (now an industrial estate) is mentioned in Domesday. It had a millpond near the Station Road bridge, the old bank of which is still visible.

In 1830 five freshwater springs were created by boring over 120 feet down into the chalk. This provides a constant flow of pure water at a constant temperature. The resulting chalk stream is a rarity, there being only 200 miles or so worldwide, and much of that in England. The boring was done to create the right conditions for growing watercress.

Remedial work began in 1972 when the Upper Lea Valley Group carried out many improvements and created the Lea Valley Walk. Other improvements were made including the provision of footpaths and the management of the reed beds and control of undesirable incomers such as knotweed, nettles and other ‘rank’ vegetation. Even the reed needs to be controlled as it spreads. Tree growth close to the water has to be controlled by pollarding and coppicing in order to allow adequate sunlight to reach the water.

The water level is more affected by water extraction upstream (East Hyde) than variances in rainfall. There is abundant river life now that pollution is absent and an adequate flow of water.

In 2010 the name was changed to the Batford Springs Volunteers, who continue the regular maintenance work and encourage community involvement. The area was originally owned by Harpenden Urban District Council and passed to St Albans City & District Council and reverted to Harpenden Town Council this year (2012), although the HQ on the Lower Luton Road – not on site – remains in the hands of St Albans CDC.

In answer to questions from the audience Mr Randall said that the river banks had broken twice in the last ten years and that there was little vandalism but the original picnic tables had been replaced by ones ‘of industrial strength’.